You are at:Home»Latest»Matt Corr’s European Diary – Honours even in wet, wonderful Copenhagen
Showing 1 of 11
Next

Party atmosphere but no fairytale ending in wet but wonderful Copenhagen by Matt Corr….

It’s been a crazy couple of months since the last Celtic awayday, in Transylvania, just before Christmas.

The draw for the first knockout stage of the Europa League had paired us with Danish champions, FC Copenhagen, the benefits of winning your group clearly reflected in a tie where, for the first time in recent memory, the Hoops might be considered favourites to progress. 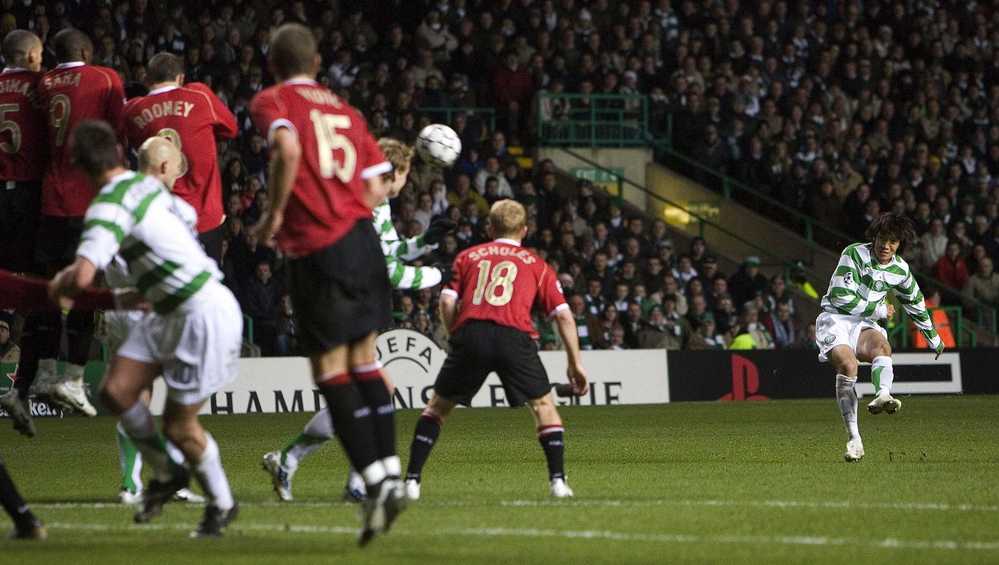 I’m not sure that has applied in any of our previous qualifications in the Champions League or Europa League era, going back to late 2006, when Nakamura’s perfectly-executed free-kick, perhaps the finest Celtic goal of my lifetime, beat Alex Ferguson’s Manchester United, to send us through to the last sixteen for the first time.

Then, we had been handed AC Milan, who would go on to win that Champions League in May, despite a heroic effort from Gordon Strachan’s men, an extra-time sickener from Kaka ruining my first visit to the San Siro.

It didn’t get much easier the following season, Celtic having beaten the now-defending champions, Milan, on an unforgettable evening under the Parkhead lights, being rewarded with a tie against Barcelona, the Blaugrana on the cusp of becoming the finest team on the continent over the next few years. They would edge a five-goal thriller at Celtic Park, before killing the tie early in the Camp Nou through Xavi, before we had taken our seats. 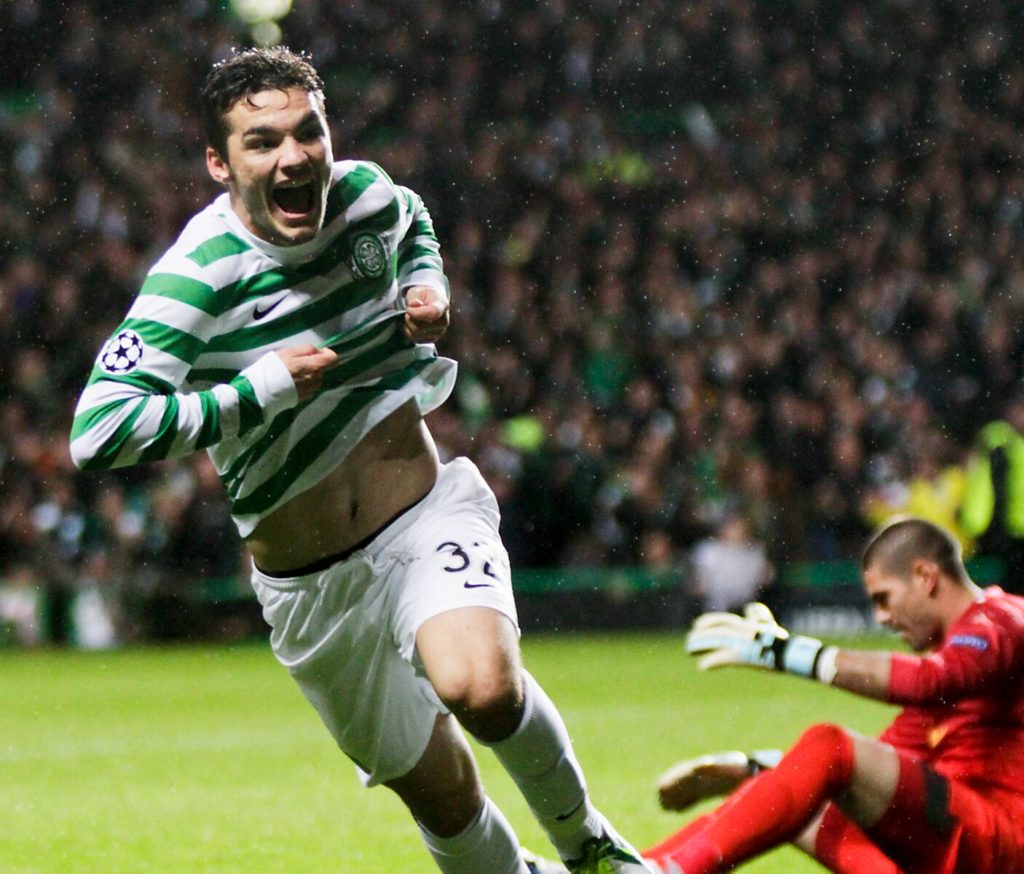 There would then be a few years in the post-Christmas European wilderness, before Neil Lennon’s Hoops beat that fabulous Barca side just the day after our 125th birthday, one of those ‘fairytale’ nights that the late, much-loved Billy McNeill once described as the very essence of Celtic. The prize for that qualification was a tie against current Italian champions, Juventus, twice-winners of Europe’s elite competition and already well underway to mirroring Celtic’s domestic domination of eight successive League titles.

The fat old signora had sung long before the Italian team bus had left Glasgow’s east end, on a night Efe Ambrose will want to forget. Nevertheless, with hope in our hearts, off we trudged to Turin. My abiding memory of that trip is the fantastic show of Hoops support, involving a constant ‘Here we go…’ chant for the entire second half, which brought huge waves of approval from the home fans.

If only supporters could win matches.

Ronny Deila didn’t fare much better. Despite a couple of early Champions League disasters, involving Legia Warsaw and Maribor, followed by an unconvincing Europa League group stage, the eight points gained against Salzburg, Dinamo Zagreb and Astra Giurgiu allowed Celtic to progress into the Round of 32 in February 2015.

Yet another Italian side lay in wait, this time old foes, Inter Milan. Whilst they were not the force of 1967, they were still a decent team. Too good, certainly, to be handed an early two-goal lead at Celtic Park. Despite a spirited Celtic fight-back to 2-2, inspired by Stuart Armstrong, defensive errors again handed the initiative to Inter, this time Craig Gordon the Bhoy Blunder looking for the earth to swallow him up, having kept us in previous games. John Guidetti’s last-gasp equaliser gave us some hope for the second leg, however, Italians do as Italians do.

Like Juve two years earlier, Inter simply played that match at their own pace, ensuring no mistakes. To make matters worse, Virgil van Dijk picked up two yellow cards before half-time, 10-man Celts battling bravely before Colombian midfielder Fredy Guarin scored a screamer in the dying moments, to remove even the consolation of a rare draw on Italian soil for the massed ranks of hooped diehards perched high up behind that goal. 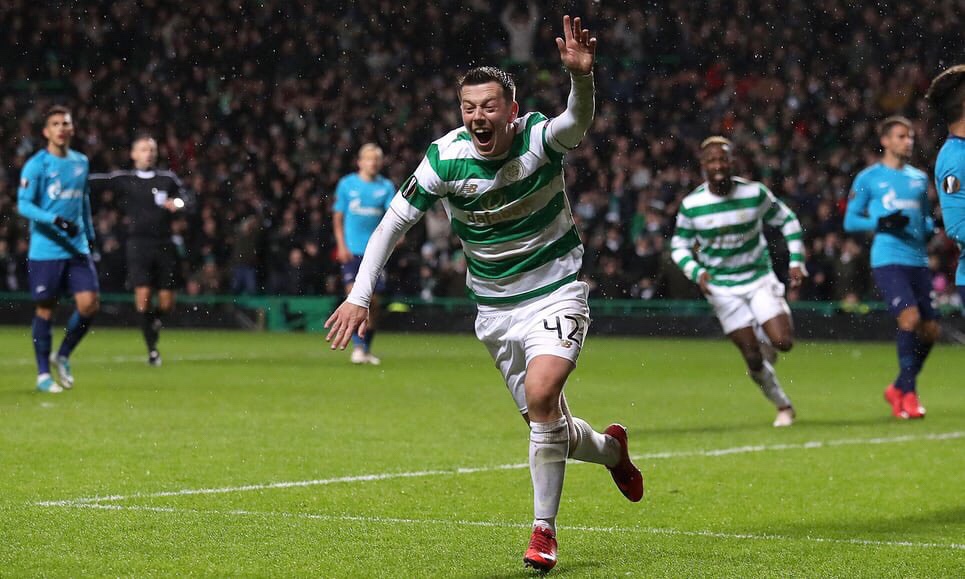 A third-place finish in a Champions League section, behind Paris St Germain and Bayern Munich, saw Brendan Rodgers’ Bhoys parachute into the Europa League in his second season at Parkhead. The draw was no kinder, pairing Celts with Russian cracks, Zenit. For once, though, we took a lead into the away return, courtesy of the Charly Musonda assist and a wonderful Callum McGregor finish. That goal had been overturned within half-an-hour in a beautiful but freezing St Petersburg, as our awayday blues once again kicked in.

Defeat in Athens, six months later, saw Celtic demoted to the Europa League by the group stage, a late Scott Sinclair winner in Trondheim giving us a decent chance to qualify in second place. That opportunity looked to have gone, as we suffered another home defeat to Red Bull Salzburg in matchday six, however, a late and unlikely Rosenborg equaliser in Leipzig saw us edge out the wealthy Germans. 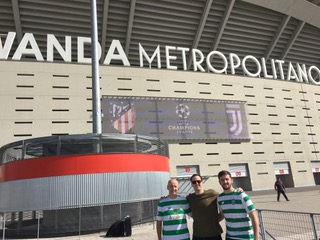 The Corr Bhoys in Madrid

The fortunate reprieve wouldn’t last too long, as the draw brought us…Valencia. Goals either side of half-time saw Los Che, our first-ever opponents in competitive European football, wrap up the Round of 32 tie long before we headed to eastern Spain.

A cracking trip via Madrid, taking in the Atletico v Juventus Champions League match with my two sons, was spoilt by a lack of tickets and a second 1-0 defeat for me in the Mestalla. Within five days of our European exit, Brendan Rodgers was heading for the door too, in his case to Leicester, the poor timing of which I will never understand.

Showing 1 of 11
Next
Previous ArticleExclusive – Tom Grant’s Celtic Park Photographs, Destruction of the Jungle
Next Article ‘We condemn those who seek to weaponise the harm caused to others,’ Celtic Trust