You are at:Home»Latest»Maybe Goal a Game Jack Aitchison is Worth a Shot

AS CELTIC look to recharge the batteries during the international break it is fairly certain Neil Lennon will spend some of that time catching up with Nick Hammond and looking towards the opening of the transfer window in January.

With Vakoum Bayo’s injury record once again coming under the spotlight and Leigh Griffiths still short on the required conditioning to be involved in the match-day squad it’s clear Neil Lennon will be looking at a supporting striker role to supply a back up to Odsonne Edouard. The 21 year old has taken his game to a new level this season and yesterday scored a fine finish in Celtic’s 2-0 win against Motherwell at Celtic Park.

With Ryan Christie rested and Olivier Ntcham coming in there is clear strength in depth in midfield that allows for rotation in those areas. It’s fair to say in normal circumstances, having led the line so well in Rome on Thursday night that Edouard would have been given the opportunity to rest. Unfortunately Edouard is the ONLY recognised striker at Celtic so being afforded time to rest his limbs doesn’t look a viable option for now.

Celtic do however have an in form striker banging in the goals and you’d hope it won’t be a case of out of sight being out of mind for young Jack Aitchison.

On 15 May 2016 Ronny Deila signed off at Celtic with a thumping win as his Celtic side hit seven past Motherwell at Celtic Park. Kieran Tierney got his first for the club, while Mikael Lustig, Tom Rogic, Patrick Roberts, Stuart Armstong and Ryan Christie all chipped in.

The seventh goal from the seventh different scorer in that particular game came from Jack Aitchison as he became Celtic’s youngest ever goalscorer.

The young striker is currently on loan at Forest Green Rovers in England’s League 2. He’s also in a very rich vein of goalscoring form.

The on-loan Celtic star is very much impressing since moving south, and on Saturday, he scored his fourth goal in four games.

Jack has already netted league goals against Mansfield, Morecambe and Cheltenham Town and he continued that goalscoring form in Forest green’s 4-0 FA Cup win against Billericay.

Now 19 years old Jack Aitchison is starting to add consistency to his game. With 5 goals scored and now four in as many games you’d certainly argue that England’s League 2 wouldn’t be the limit to his goalscoring progress. Whether we’ll see that development flourish at Celtic remains to be seen. 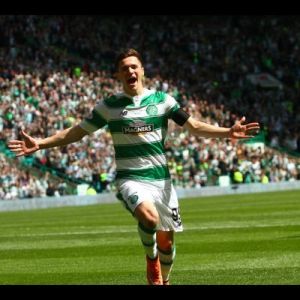 Jack it seems is very much turning into a clinical finisher and it will now be interesting to see how long this scoring run can go on for when he return to league action with Forest Green with a home tie against Plymouth Argyle on Saturday and before that an FA Trophy away trip to face Walsall tomorrow night.

When plans are being drawn up for striking options at Celtic it’ll be worth keeping a close eye on Jack Aitchison’s development.

Previous ArticleCeltic have agreement to sign loan star in the Summer but £70k per week wages could scupper move
Next Article ‘Good way to finish a Great Week! Always stay hungry,’ Christopher Jullien