You are at:Home»Latest»McAvennie Says He Was Baffled By Lennon’s Demeanour On The Touchline & Backs Steve Clarke For The Job

Former Celtic great Frank McAvennie has told Football Insider that he didn’t think Neil Lennon was his usual self on the touchline this season.

Speaking to the outlet, McAvennie said: “I thought in certain games they (Celtic) were awful and in certain games they were good. I don’t know if Lenny had it in his bones this year. When Lenny first took over as manager again he was shouting and bombing up and down the touchline. But that all stopped this season and I thought, ‘What’s the matter?’ He just couldn’t get it across to the players that he didn’t like that slow, lethargic play.”

Lennon’s position as Celtic boss came to an end this week and his resignation was formally announced. The club have endured an abysmal season, sitting 18 points behind the league leaders and out of all competitions except the Scottish Cup. However, with a new CEO arriving and now a new manager set to come in, all eyes are on the future and how the club can progress next season.

A number of names for the managerial post have been put forward by fans. Rafa Benitez, Jack Ross, Eddie Howe, Roberto Martinez; the list is endless. Another name in the running is Scotland boss Steve Clarke, and McAvennie thinks that his old teammate would be an exceptional choice for the position.

“He is one of the best coaches in the world, I keep telling people. He has coached under Mourinho, Dalglish – some of the best. He would bring in his own players and they would need to let him buy players. I think he’d take it, too.” Given Clarke’s comments about sectarian abuse, and his breakdown when being the subject of it as Kilmarnock manager, many felt that he would distance himself from the post, but clear McAvennie has a different view.

The Scotland gaffer has the European Championships to look forward to, getting the nation to the finals of a major tournament for the first time since 1998. In that sense, he certainly has a lot of credibility, whilst he also specialises in making his teams hard to beat.

“One thing Stevie would do is sort the defence out. I think those at the club right now will be gone though because I don’t think any of them can defend – none of them. A lot of things have gone wrong but one thing Stevie Clarke would sort out would be that defence.” 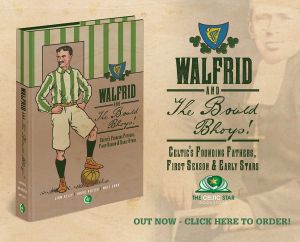 Previous ArticleVideo: “I want to strip us back to what makes us a good team,” John Kennedy
Next Article Is There A Dream Team? We Are Waiting, Mr Desmond