You are at:Home»Latest»McGregor – Celtic are Bolder, Resemblant of O’Neill Era

Callum McGregor has claimed that Celtic are far more bold in Europe under Neil Lennon than they were under his predecessor, Brendan Rodgers.

McGregor spoke to the media, as reported in The Scottish Sun, as the Celts prepare to face Stade Rennais on Thursday night at Celtic Park.

The Scotland midfielder, 26, suggested that Lennon may be superior to Rodgers in Europe if you are to take them by the results. Aside from being at the helm when Celtic endured some of their heaviest European defeats – Barcelona and PSG, Rodgers did see the club into the Champions League two years in a row. However McGregor reckons that incumbent gaffer Lennon might just be better.

“He could be. You see it with results. We went to Lazio and I think people hoped rather than had any expectation. But when you deliver a result like that it changes everyone’s mindset.

“That’s what we have to do now as a team in Europe.” 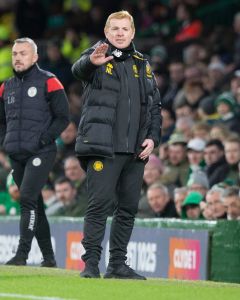 The manager prowls the touchline

McGregor teased with the idea that the Treble-Treble winners would be pursuing a quadruple this season by suggesting that the team have enough in their ranks to push on and do something, whether that is top the group or anything beyond remains open to interpretation.

“We have been great domestically and that is still our bread and butter, we still have to look after that. But I think in Europe now we probably have enough experience where we can really go and try to do something.

“We have two games now to finish top and that is where we really want to be, then hopefully we get a good draw and we take it from there.”

A win against Rennes on Thursday would confirm top spot for the Celts and what could be a potentially easier draw than should we finish second. 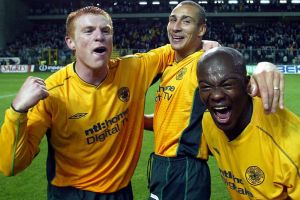 McGregor also saw some resemblance to the current Celtic team to those that Lennon played in under Martin O’Neill. Who’s teams were powerful in attack but solid in defence, they get the ball forward quickly and overload teams with attack.

“He builds similar teams when he is at the helm. And I think now you can say there are certain similarities.

“There is pace on the counterattack, good mindset in the middle where you are not giving away too many balls, and then when you are going forward we have that front three who can really hurt teams. Jamesie, Ryan, Tom, Oli, the list goes on.”

Hopefully, though, unlike O’Neill famous European run to Seville in 2003, it doesn’t come at the cost of domestic success with Celtic on the road to make it nine-in-a-row.