CALLUM MCGREGOR is hoping that Celtic’s congested fixture schedule will allow for the Scottish Champions to build momentum, something that is essential to the 10IAR push. The Celtic midfielder was speaking to the Celtic programme for today’s match at home to Livingston and will be hoping that a win can allow for more fluid and consistent levels of performance.

The season’s start has been tricky with a draw at Kilmarnock, Bolingoli’s jaunt to Spain then the Champions League exit to Ferencvaros. Since then, Celtic have rallied and are just three points off the top spot – with a game in hand. Wednesday’s win over St Mirren was a sluggish if not dull match but the three points is all that we will remember from that trip to Paisley.

“It’s been a bit stop-start, in terms of the Coronavirus, the two games being postponed, and then we’re not long back from the international break as well”, 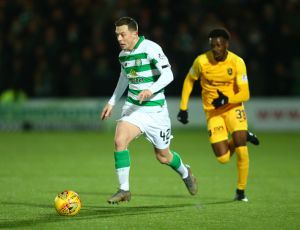 “Now we just need a little bit of a run of games and a little bit of momentum. We had a wee blip at Kilmarnock, but you have to be positive and think that might end up being a good point at the end of the season. We’re always trying to take the positives from it, and it was important that we didn’t lose the game.

“We’ve had some good results, and I think you can start to see the performances are getting a bit better, a bit slicker, we’ve scored five a couple of times this season already, which is always positive.”

Celtic, who found out their Europa League play-off path yesterday, will be hoping to make the group stages and get a run of fixtures before the international break next month that allows the club to get momentum built up that will hopefully see Celtic top of the table.

Today, Celtic have the opportunity to put a marker down and go top of the league before, at least, Rangers play on Sunday.