You are at:Home»Latest»Memories Few – ‘I just hoped the day would never end,’ Celtic’s Match-winner Tommy Coyne

SCOTTISH CUP holders Celtic travelled to Tynecastle to open their league campaign at the start of the 1989/1990 season. Never an easy ground to visit but when you face a Hearts back 3 consisting of Craig Levein, Dave McPherson and Alan McLaren you’d be expecting a blood and thunder encounter in front of a partisan crowd. It was to Celtic’s credit that they matched the battle and brought the finesse to the occasion the separated the sides.

Celtic started with a strange looking defence. Wearing the number 3 at left full back was the now veteran Tommy Burns. An odd decision on paper but with a young Stevie Fulton playing on the left of midfield it was clear manager Billy McNeill was looking for some guidance from behind for the youngster. Roy Aitken partnered Derek Whyte at the heart of defence while Chris Morris was in the right back berth. 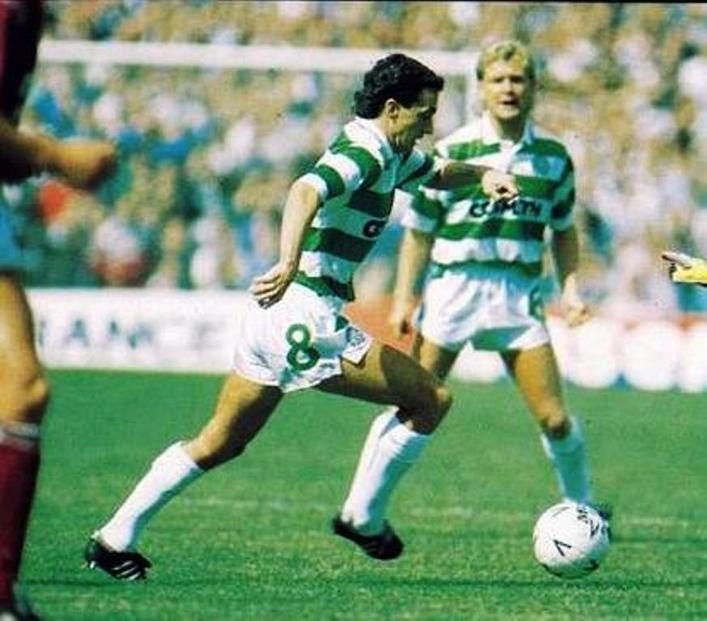 In midfield Mike Galloway was making his debut for Celtic. One of the summer’s big purchases at £500k he was given a very warm welcome from the home support having just left Hearts. How often does that happen?

Galloway was supported by Peter Grant carrying out the enforcer role to allow the playmaking Paul McStay an attacking threat. With Fulton on the left, the first striking position was filled by the biggest signing of the summer break.

Dariusz Dziekanowski signed for 600k from Legia Warsaw arrived at Celtic with a reputation for style and class alongside his 51 caps for Poland. He showed much of that on his debut. His name being sung from early on by a large travelling support. 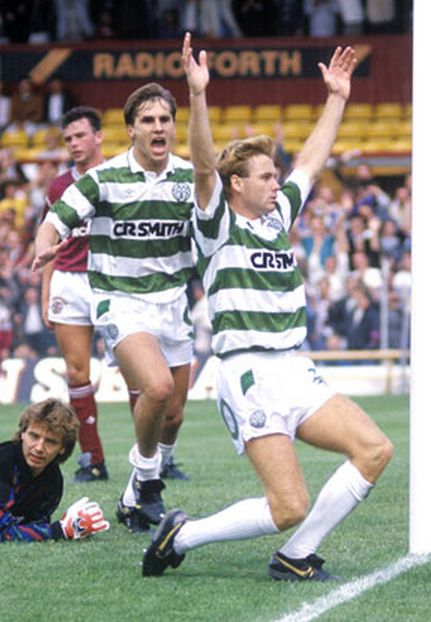 Up front alongside the Pole was Tommy Coyne still looking for his first Celtic goal having up to now being played in an unsuitable midfield role now had the opening as a striker. He had this opportunity, with Andy walker resigned to the bench to show his worth as a striker. He duly delivered.

Hearts stated well with Ex Celt John Colquhoun the stand out performer for the Gorgie side his picking up the ball from deep and running at the Celtic defence caused problems. It was however Celtic who struck first.

Hearts new signing at 200k from Red Star Belgrade Musemic, a striker, found himself called into action in the wrong box from where he’d prefer to operate and clumsily brought down Roy Aitken for a penalty.

Tommy Coyne showed guts to step up and take the kick and although Henry Smith got both hands to the penalty, the power in the execution was enough for the ball to rebound off keeper and post before finishing in the back of the net. It was Tommy Coyne’s first goal for Celtic but more was to follow.

More in fact followed before half time. Aitken won the ball at the back, crossed the halfway line and fed Mike Galloway who returned the favour playing in the overlapping Aitken wide, his front post ball was met perfectly by Tommy Coyme leaving Henry Smith nowhere near this one. Just like London buses, Tommy Coyne now had 2 goals having waited an age for the first.

The second half was mainly Hearts attacking and Celtic trying to hit on the break. In fact the goal that put The Hoops 3-0 came from such a break. Tommy Coyne started and finished the move. Coyne won the ball just outside his own penalty area and fed an onrushing and highly impressive Steve Fulton, who in turn gave the ball to an advancing Paul McStay. With a touch of genuine class amidst a game of blood and snotters, The Maestro dragged the ball behind him onto the onrushing Coyne who had covered almost the whole of the Tynecastle pitch to send a low right footed drive beyond a despairing Henry Smith. It was the pick of the goals and the perfect execution of the artistic counter attack. 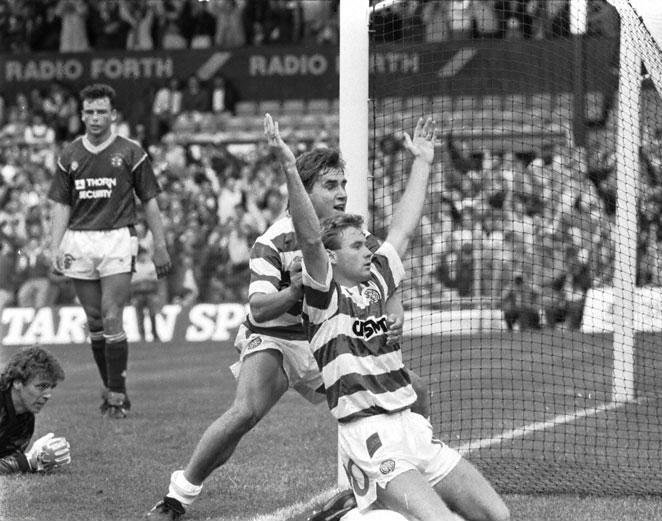 Hearts fans now took the opportunity to head for a quick exit and the pubs of Gorgie Road. Those who did missed their club’s deserved consolation. John Colquhoun’s corner was met by the head of the cumbersome looking but strangely effective Dave McPherson. The centre half took advantage of Pat Bonner’s bizarre positioning on his six yard line and behind Hearts big centre half to head in and leave the final score, Hearts 1 Celtic 3.

The game was a very tough opening encounter from which Celtic came out with much credit. This Hearts side were no mugs and to win so emphatically gave hope for the season ahead.

Tommy Coyne the hat-trick hero who until then hadn’t scored at all was clearly delighted in his post-match interview with Jock Brown. “I just hoped the day would never end” he said.

It was clearly monkey off the back of a player who would soon become a hero to me at least.

A 3-1 win at Tynecastle had us all hoping for a fine season ahead. Unfortunately football doesn’t always work out as you’d hope.

Hopefully you can take the time to watch the highlights below. A big thank you to Celtic Wiki for the highlights and match info. I’d recommend it to any Celtic fan looking to stroll down memory lane.

Previous Article‘Flying Pigs and my apologies to Hearts, it has been a good weekend for Celtic,’ David Potter
Next Article ‘All Hampden was covered in green, white and gold,’ David Potter’s Seven Magnificently Random Celtic stories