You are at:Home»Latest»Michael Duffy, Faither of Celtic Noise, Requiesce in pace

From the outside looking in The Celtic Noise may seem like one of so many Celtic fans forums, yet it is an awful lot different. There is an unwritten rule of respect and tolerance that binds the place together. Michael Duffy was one who epitomised just that.

‘The Noise’ is a Celtic family within the Celtic family and Michael was the patriarch, the head of our family. The Faither. In the early hours of the 23 January 2021 Michael Duffy sadly passed away. His sister Fiona informed us of his sad passing and she, his family and his friends are all in our thoughts today.

Right now, many are feeling a sense of loss for someone many never met physically yet feel they knew intimately, as such there is a genuine void left behind as a community feels the pain of his passing.

There are many great Celts on the Celtic Noise, in time and naturally, someone will step into the space left behind but they won’t be able to replace our Michael. You cannot replace the irreplaceable.

His passing and the void he left behind will be keenly felt for some time to come, but we should celebrate him rather than mourn him. As someone who acted with such respect and preferred a low profile he’d probably prefer as little fuss as possible. Unfortunately, the passing of such a man cannot be marked without shining a light on his generosity.

Larry Cafiero of this parish will be writing Michael’s obituary for The Celtic Star as such the details of the man and his life will be covered in greater detail there, this is but a precursor.

Michael Duffy was the elder statesman of the Celtic Noise, the man who welcomed the new members, the one with a key eye for the infiltrators and the man who showed generosity like no other. Michael was the first to welcomed me to the site a couple of years back, was supportive of my writing and just as critical of its content if he disagreed. I admired both but admit to more than a little spring in the step if Mr Duffy approved.

At Christmas, Michael also purchased and posted a Celtic kit for the granddaughter of a member of the Celtic Noise community. It was unexpected, warmly received and sent halfway round the world without a word to the wise from Michael Duffy. He wanted to do that, he wished to welcome another generation into the Celtic family, one he knew she’d be embraced within just as he was, his family was and his own elders had done for him. There is no greater gift than the gift of Celtic. It is clear now that Michael wanted to pass that on.

DILLIGAF from Celtic Noise picks up the story and also has given us permission to publish these photos of his grand-daughter….

Michael and I are from the same era, think he was a month older than me, and we clicked right away. I sent him a Christmas card with some photos of Beau and Liliana in 2019 and we kept in touch via e mail. Although we never met, we are kindred spirits, like many of the members on your wonderful site.

It was my intention to get my granddaughter, her very first first soccer strip, but Michael, the crafty man that he was, beat me to it. When we opened the parcel, it was ‘lump in the throat time’ especially when my wife wife said “Oh wow, check the back !!!”

Liliana loved it when she saw it. Michael, was the heart and soul of the Noise and we’re all glad we got to know him through it. An accomplished musician by all accounts and did a bit of travelling in his day, Ireland etc

Michael told me he was housebound for the last two years, due to mobility and health issues. Celtic Noise was such a boon to him as he was able to interact with fellow Celtic supporters, and share his wit and wisdom for the last few years, which he otherwise wouldn’t have been able to.

Shamrock and Boab1916 knew him from other blogs, but he told me, there was no place like the Celtic Noise.
Sorry to be so long winded, but having just lost two family members in the past 6 weeks, plus having a few days stay in the hospital, after a heart attack (2 weeks ago) you’ll understand, Michael’s passing, hit me a little hard, even though we never actually met, we were brothers in Celtic 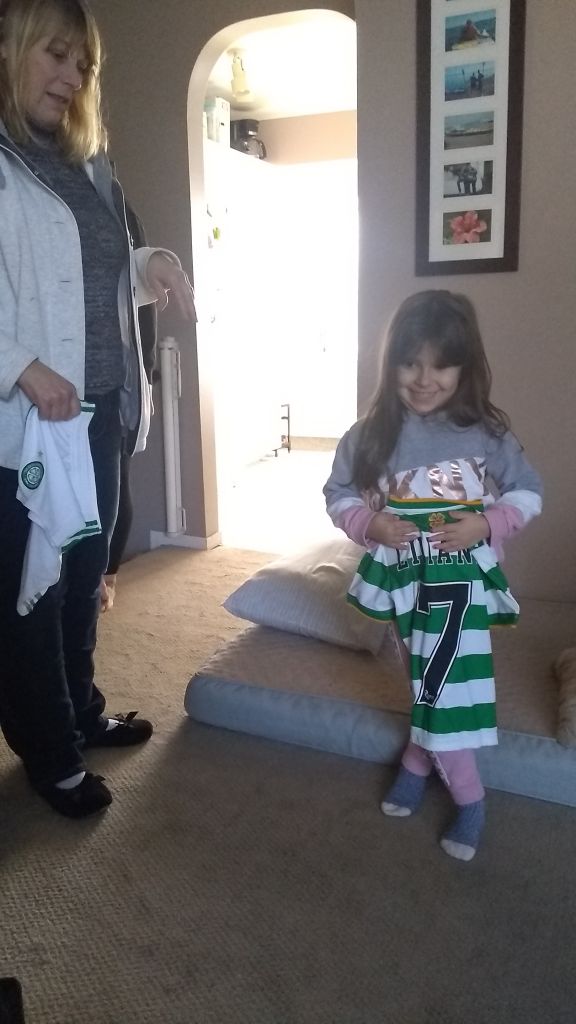 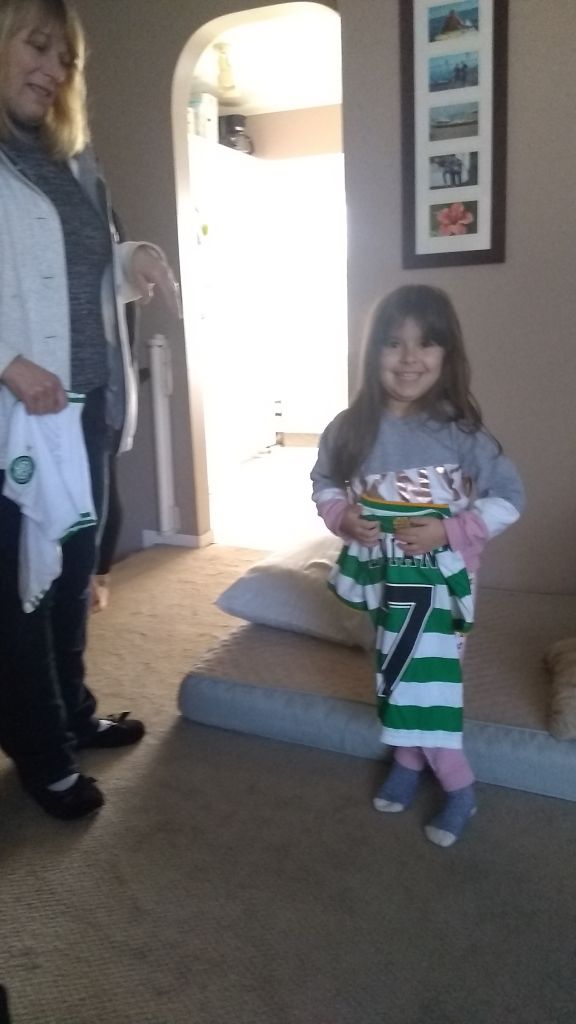 Michael Duffy once explained to me that his favourite memory as a Celtic supporter was not Lisbon, instead it was the 1965 Scottish Cup Final, where Celtic, behind twice to a fine Dunfermline side, won the game with the odd goal in five. That winning goal came from the head of Billy McNeill. It was according to Michael the game where the foundations for Lisbon were built, a match where a young Celtic team came of age, became winners and formed a habit that would serve Celtic and the support well. 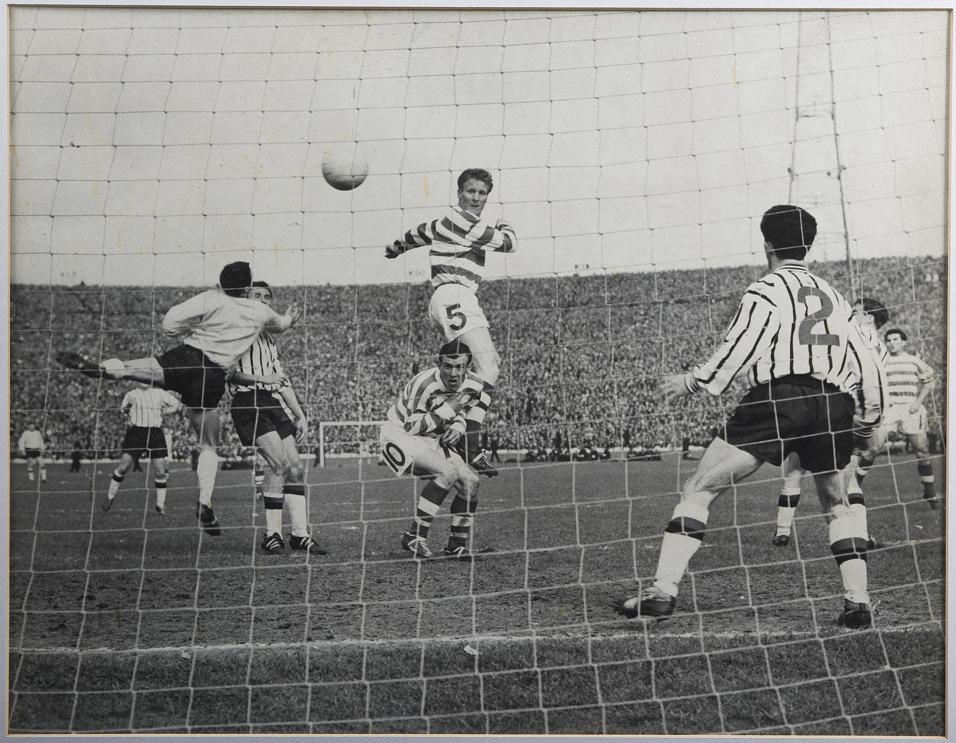 For many of us on The Celtic Noise forum Michael Duffy was our Cesar, the man we admired more than any other in our wee Celtic community, one we all looked up to. A man whom we of course mourn, but more than that we continue to celebrate his wonderful spirit, a man who embodied what it was to be a Celtic man.

In a world where there are so many out for themselves Michael Duffy was one of the genuine Good Souls. A true Celt, the Faither of the Celtic Noise.

Rest in Peace Michael Duffy, and have that word with the big man. See if you can sway that 12-man Celtic team you championed as a tactical advantage, however accidentally. We could certainly do with it right now.

Thank goodness for the good souls,

As I turn to you and I say,

If it wasn’t for the good souls,

Life would not matter’

This one is for you Michael, Faither of Celtic Noise, Requiesce in pace.