You are at:Home»Latest»Mike Maher reflects on over 60 years supporting Celtic
Showing 1 of 7
Next

After less than a two month break the football season is underway again. Close season breaks are a lot shorter than they were in my young days but there is still that feeling of excitement and hope when you get to see your team in action again.

The Covid pandemic and consequent travel restrictions have meant that it is now almost 3 years since I have seen the Bhoys in the flesh but the passion is still as it was over 60 years ago when I first set foot in Celtic Park.

It was a vastly different arena then. Like many kids I was taken by adults to my first game and got the traditional lift over the turnstile. We stood at the “Rangers End” of the ground. This was uncovered and the terracing steps were not always in the best of condition. At the back of the terracing was a large, black structure – the half time scoreboard. Sometimes we did go into the wee enclosure in front of the main stand but mostly our vantage point was behind the goals.

To our right was a covered terracing. My uncle, and a few others, sometimes referred to it as the hayshed but its common name was “The Jungle”. I never got an explanation as to why it was so called but with its relatively low roof and gloomy appearance I presumed it had something to do with being like ” the dark jungle” I’d read in the Tarzan books.

To our left was “The Stand”. I never heard it called anything else. Not “Grandstand” Not “Main Stand”. It was the only seated area so did not need a title other than The Stand to distinguish it. 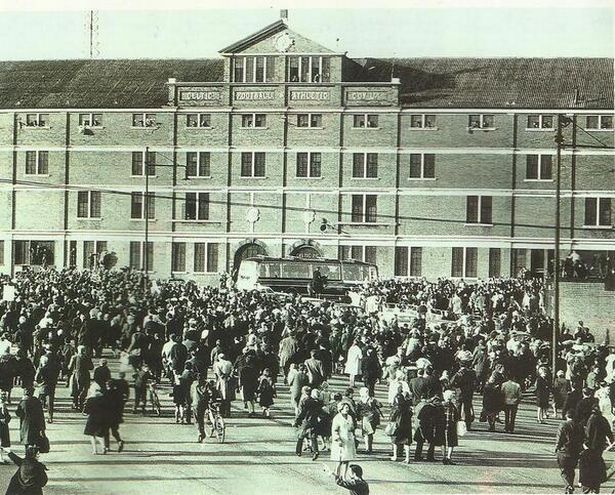 At the other side of the stadium, behind the opposite goals from where we stood was “The Celtic End”. Those were not great days for Celtic but there would be singing from that end of the ground on occasions. As kids the Celtic End looked like, and sounded like the place to be. The fans in the Rangers End and the Jungle would of course yell their encouragement, and (especially it seemed the Jungle) their disapproval but it was the Celtic End where there seemed to be more passion in the voices. To our left the Standites always seemed a bit more reserved.

I have a particular memory of one sunny day at Celtic Park, standing in the Rangers End and hearing “On Erins Green Valleys” floating over from thousands of voices at the other end of the ground. Unfortunately, there were other, less savoury recollections. On at least one occasion I remember seeing the crowd at the Celtic End parting to reveal two antagonists throwing fists and punches at each other until the police came and dragged them away. The crowd then closed in again as if nothing had happened. That whiff of danger I suppose made the Celtic End even more appealing in a sense.

It certainly was the popular part of the ground. Attendances then were nothing like nowadays but there would often be kick off delays to let the crowds in. I can recall lots of occasions when an announcement would come over the loudspeaker to tell people queuing at the “Railway End” (the “official” name for what everyone called the Celtic End) that there were empty turnstiles at the other end of the stadium and from there they could make their way to any part of the ground.

For us boys though, even when we started going unaccompanied by adults it was the Rangers End. We did occasionally stray into the Jungle if the weather was on the rainy side. However, considering the number of holes in the roof there was no guarantee of staying dry. And if the rain didn’t get you the flakes of rust falling from the dilapidated structure would.

Showing 1 of 7
Next
Previous ArticleSo just who were the Celtic Class of 1955? Part 2
Next Article Celtic captain Callum McGregor on the nature of football