BY Saturday 27 March 1965 Celtic already had developed a new edge to their game under the new manager Jock Stein. They played Motherwell in the semi-final of the Scottish Cup on that day in a tough match that ended in a 2 -2 draw. 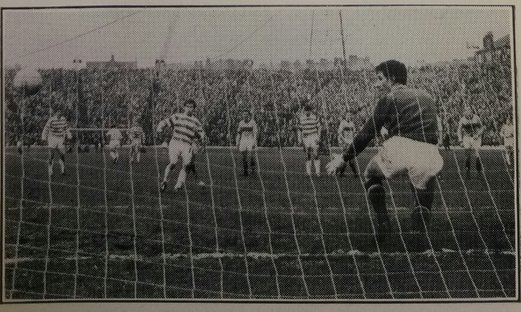 Motherwell twice took the lead through Joe McBride who gave Billy McNeill a very uncomfortable afternoon, but Celtic fought back and scored through Bobby Lennox and then Bertie Auld converted from the penalty spot to bring Celtic level.

Stein’s hungry side then thought they had won it when they scored in the last minute through a fine move from Jimmy Johnstone and Bertie Auld, but they were flagged for offside, a decision that looked harsh, to say the least.

Motherwell had Pat Delaney, son of Jimmy, playing for them, but their star man was their striker and goal-scorer.

So it was on this day in 1965 that Joe McBride caught the eye of Jock Stein.

Previous ArticleStrict Liability – Celtic formally outline their opposition
Next Article ‘Five Past Rangers and the Celtic fans were delirious with joy,’ David Potter