You are at:Home»Latest»Naismith needs operation and is out for up to 8 weeks, Levein confirms

STEVEN NAISMITH is set to go under the knife and will be missing from the Hearts side for the next few months. That is the news coming out of Tynecastle this morning as Craig Levein tries to pick up the pieces of his side’s second half ‘pumping’ from Celtic.

Levein list his talisman early in the match and all Jambo hopes that the former Everton and Norwich striker would be available to face Hibs tomorrow evening or Celtic on Saturday have been dashed.

Craig Levein confirms Steven Naismith may require an operation and could be sidelined for 6 to 8 weeks. pic.twitter.com/ab4aeG44Yo

And it is likely to get worse for Levein when the SFA’s Compliance Officer Clare Whyte reviews Steven MacLean’s unacceptable groping of Celtic midfielder Eboue Kouassi – see HERE. This is likely to lead to a 2 match ban, starting on Saturday for the pervy hand-ball specialist.

Naismith’s injury will be a major headache for Scotland manager Alex McLeish – who favoured the Hearts man over Leigh Griffiths then handled the fall-out in a pretty unproductive manner. Now he is going into the crucial two games against Albania and Israel trying to save his job without Naismith and hoping that Griffiths will re-join the Celtic squad shortly.

Yesterday Brendan Rodgers refused to put a timeline on that happening – see HERE – although he did suggest that it was likely to be soon. 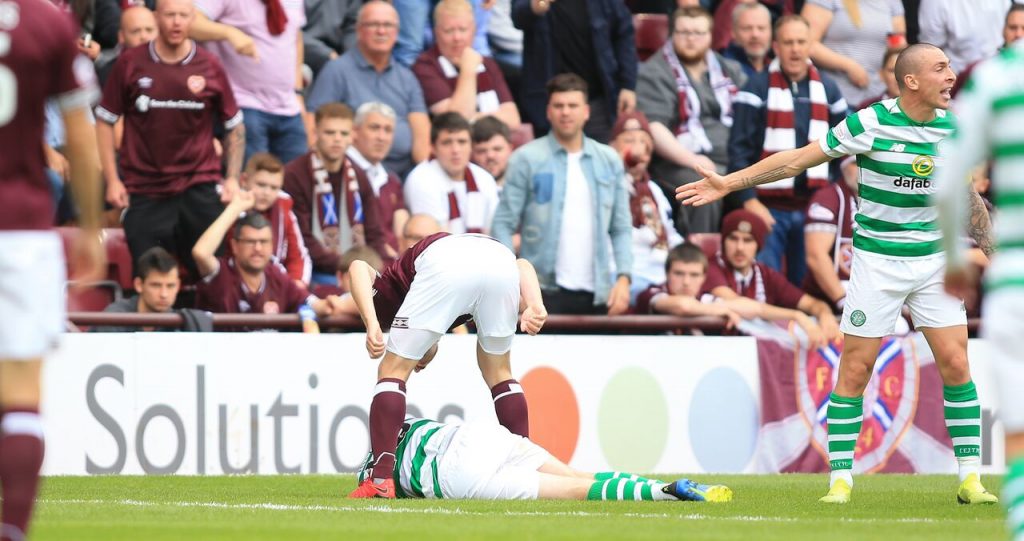 Few Celtic Fans at Murrayfield on Sunday had much sympathy for Naismith as he departed the scene inside the first 10 minutes. His assaults on both Scott Brown and Jonny Hayes during recent games at Tynecastle have made the former Kilmarnock striker extremely unpopular among the Celtic support.

Karma is a bitch pic.twitter.com/Pk94Z6ESpi

Karma was the general feeling as Naismith limped away at Murrayfield.