You are at:Home»Latest»New Celtic signing spoke to Scottish football veteran prior to move

St Johnstone defender David Wotherspoon has revealed that he spoke to new Celtic signing Ally Johnston about the prospect of a move to Paradise. Wotherspoon, 32, had a spell with Celtic as a youngster but has made his name playing for Hibs and St Johnstone and was part of the Canada National Team out in Qatar.

Speaking to The Sun, Wotherspoon said that he will be the type of defender that Celtic fans will love given his attributes.

“He spoke to me about the move a lot and I told him it was a no-brainer. Celtic are a massive club.

“He’s a great guy first and foremost and a great defender. You’ve seen in the World Cup what he can do and I think he’s one of those type of defenders Celtic fans will love.

“Alistair is robust and Mr Consistent. He has the attributes to do well in Scottish football. He’ll be tested in Europe as well, of course. 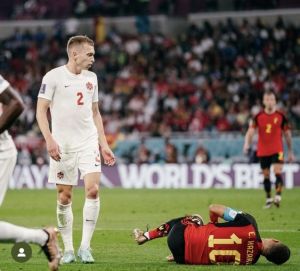 “The fact he’s played at the highest level of international football now will stand him in good stead. I’m looking forward to seeing him when he comes across and looking forward to playing against him hopefully as well. We could well be on the same side of the pitch.”

Johnston arrives from CF Montreal on a five-year deal. Having left Nashville for CF Montreal in December last year, Johnston went on to make 39 appearances and scoring four goals. He has also been capped 33 times by Canada, scoring one goal.

The right-sided defender started as the Canadians faced Croatia in Matchday Two in Qatar with Celt Josip Juranovic lining up on the other side. It remains to be seen whether he is a direct replacement for the Croatian full-back.