You are at:Home»Latest»Nicholas targets Brown but the Celtic captain has heard it all before

CHARLIE NICHOLAS has once again taken a pop at Celtic as the Scottish Cup Final nears. The former Celtic striker used his Express column to slaughter Brown and tell Neil Lennon that he needed to forget the idea of playing Celtic’s old guard on the back of two wins.

Celtic won 3-2 versus Lille and 2-0 against Killie at the weekend as Brown watched on from the sidelines. However, Nicholas believes he should stay on the bench if Celtic are to have any chance of winning the final.

“Scott Brown should not start for Celtic in this Sunday’s Scottish Cup final against Hearts at Hampden. Last weekend Neil Lennon said the ‘hardcore’ players who got them to the national stadium deserved the chance to take the last step on the journey.

“Yet, there’s no getting away from the fact that in the last two games the manager has been handsomely rewarded by the players he had never really given a chance to until last week. We are talking about midfield duo David Turnbull and Ismaila Soro and keeper Conor Hazard.

“Now Lennon is considering recalling captain Brown, who has been kept on the bench for Celtic’s last two games, which they won in his absence. I could understand the logic behind Ryan Christie coming back into the starting line-up, but not Brown.

“His legs aren’t there and he is not playing like he used to. Brown is no longer a controlling presence in midfield and isn’t as influential to the team as he once was. 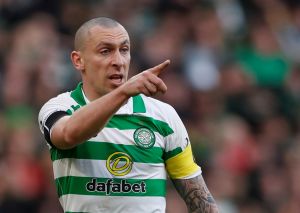 “In the big games over the past 18 months, it has been more about Brown’s nuisance value and not what he actually does on the ball.

“He had become a spoiler but that role was diminished when Lenny moved away from Brendan Rodgers’ preferred style of play and now it carries little weight or relevance. Brown is still a big personality in the dressing room but Celtic are not going to miss the 35-year-old if he doesn’t play.

“I understand that Brown remains the figurehead for Celtic and if they win the final then, rightly, he should lift the trophy, but the manager has to go with the players in form, namely Mohamed Elyounoussi, Turnbull, Soro and Hazard.

“They have done everything that’s been asked of them. Would it be a risk too far to play them at Hampden? Not at all.

“By freshening up the side, Lennon has managed to get away from the usual suspects and pick players who will play without fear. Soro,Turnbull and Hazard have given Celtic a lift and real energy to spark them back into life.” 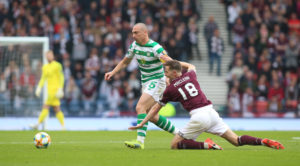 Scott Brown is one of Celtic’s most decorated players and has played in countless finals, he has the experience in these games and can influence it in his own way. Nicholas is right, he’s not the same player that he was ten years ago but neither is Rangers’ Steven Davis yet he is still playing.

Brown needs to have his games managed in order to maximise his effectiveness and Soro has proven to be a valuable asset, with a defensive edge and bite in tackles. However, Brown is still the club captain with an enormous amount of influence in the dressing room as well as on the pitch. If he is selected to play, he knows what is at stake.

Time and time again, the lazy ex-pro union have written Brown off and he has responded again and again. Celtic are on the verge of a Quadruple Treble and 10IAR is still within our grasp so regardless of the quips from Nicholas or anyone else, Brown can still influence a game and lead Celtic to the Premiership.