CELTIC opened their summer season at the K-Park Training Academy and earned a comprehensive and well-deserved 3-0 win over city rivals Rangers.

Celtic are looking to make a real impact this season in the Scottish Women’s Premier League so this was a fantastic start for the team.

Two goals from Nicole Pullar, one in each half gave Celtic a comfortable 2-0 lead and a third by Ruesha Littlejohn made sure of the points for the home side. 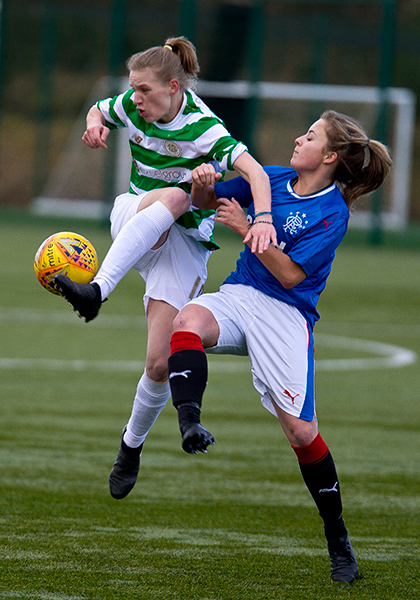 Pillar was making her debut for Celtic so she really has got of to a dream start in the Hoops. Other new faces in the Celtic side for the new season were Keeva Keenan who made her first start for the club while there were three new signings on the bench. laire Crosbie, Rachel Donaldson and Claire Adams all got the chance to see what their new team-mates can do as Celtic strolled it in the snow.

Celtic attacked from the start and Sarah Ewens almost opened the scoring with an early effort on the Rangers goal. The home side piled on the pressure as they searched for the opener and won a series of corners but the visitors were able to clear their lines.

Kelly Clark went close with a fine header and a shot from Littlejohn brought out a fine save from Kym Ramsay in the Rangers goal.

Rangers survived the opening 20 minutes and tried to settle into the match after Celtic’s whirlwind start. However the Hoops kept pressing for the opener and on 24 minutes Ewens was unfortunate to see her shot come back off the post. 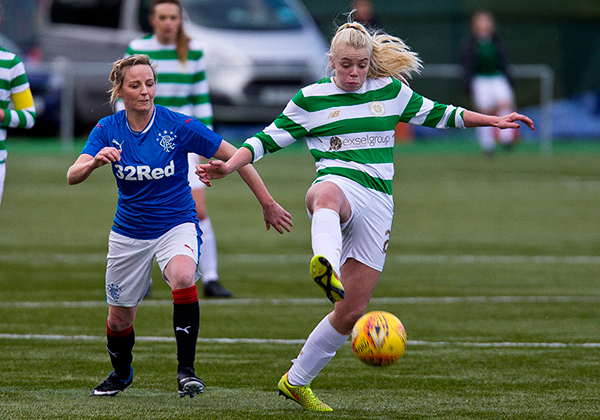 Captain Kelly Clark was running the show for Celtic and players like Heather Richards, Maddie Fulton and Ruesha Littlejohn were all playing well. Celtic’s new look front two pairing of Ewens and Pullar were both full of running and proving to be a real handful for the Rangers defence.

A goal must come and come it did on 26 minutes. Richards threw in a decent corner, Rangers failed to clear as players fought for the ball inside the Rangers six year box and eventually Pullar got the vital touch to open her account for the club and give Celtic a well deserved lead. 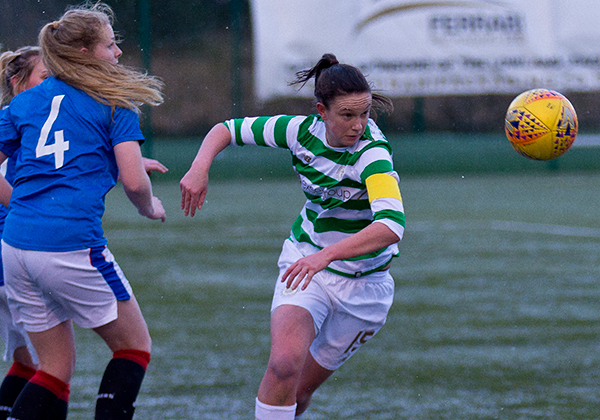 Yet for all the hard work put in to earn their first half lead, the visitors almost grabbed an equaliser just before the break. Rangers hadn’t threatened Megan Cunningham so far in the match but the Rangers forward Hay found herself in the clear and looking certain to score. Her shot however produced an excellent save from Cunningham and the score remained at 1-0 to Celtic.

It was more of the same in the second half as Celtic dominated and looked to add to their advantage. Pullar once again was in the right place on 49 minutes to take advantage of hesitancy in the Rangers defence at another corner to double Celtic’s lead. She was now on the look out for a dream debut hat-trick with most of the second half still to play.

Things went from bad to worse for Rangers just three minutes later, however this time the Celtic scorer was Littlejohn.

Celtic were on easy street and spent the rest of the match looking to add to the Rangers misery but there was no further goals.

Claire Adams and Rachel Donaldson were both brought on for their Celtic debuts.

THE CELTIC STAR WOMEN OF THE MATCH – Nicole Pullar.

Why Brendan Rodgers had to apologize to Tom Rogic, read HERE.

Previous Article‘You’ve never heard anything like Celtic, with their fantastic support,’ Kanchelskis warns Zenit
Next Article Tony Watt is looking for his tenth club as his Belgian deal is cut short