You are at:Home»Latest»No January Move for Europa League Star but Lenny Eyes Reinforcements

Neil Lennon has confirmed that Europa League stand-in star Lewis Morgan won’t be leaving the Hoops in January. Lennon’s comments crush speculation that the 23-year-old might return to St Mirren or reunite with Jack Ross at Hibs. Whilst the manager also flirted with the idea of reinforcements arriving in the transfer window to bolster the squad.

As reported in the Daily Record, the Irishman confirmed Odsonne Edouard wasn’t ‘a million miles away’ from making Sunday’s trip to Dingwall so Morgan might again start upfront, ending speculation that he might leave in the January window.

“We’re not in the mood to do that. He is an important part of the squad.

“You can see what he brings at times, he just needs to believe in himself a little bit more and that performance against Rennes will do him the world of good in terms of his confidence.”

Morgan was used as a makeshift striker, ahead of Leigh Griffiths, as the Champions manager the Frenchman’s injury concern. Lennon revealed that they had been thinking a back-up role as a striker might suit because of the attributes he has. 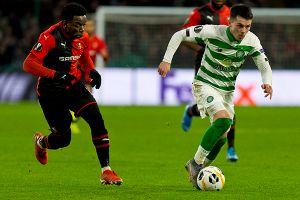 “He has been showing that in training and I’m pleased he’s able to convert that into game time.

“His goal was fantastic, a striker’s goal really. It was like an Edouard goal. We felt he could bring pace and he’s a very fit boy.

“He is good with both feet and is getting stronger, that comes from the belief in himself.

“We want him to be aggressive in his play and he certainly was that.”

Whilst the manager is unsure if Edouard will make it, he has stated that Griffiths is available BUT that Celtic WILL be looking to bring in a striker in January, as expected.

“But it’s something we’ll look at in January.”