You are at:Home»Latest»No Rest for the Best – Four Celts in Scots Squad

Steve Clarke has named FOUR Celtic players in the squad for the meaningless fixtures versus Cyprus and Kazakhstan later this month. Celtic’s James Forrest, Callum McGregor, Ryan Christie and Greg Taylor are named in 25-man squad.

Scotland can no longer qualify out the group; however they have play-offs in the New Year that could still secure a Euro 2020 place for the National Team; however, these fixtures carry little or no significance other than a small bit of national pride. 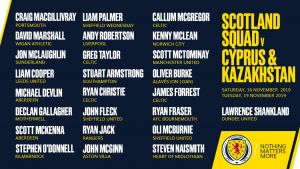 The break would have proven to be a good opportunity for some Celtic players to gain a short period of rest ahead of a gruelling fixture calendar in anticipation of the Winter break at the beginning of January. Christie, Forrest and McGregor have played a lot of football and Steve Clarke surely knows what they are capable of now, so why then subject them to what is, in essence, a couple of international friendlies.

It will give an opportunity to other Celtic players to get some rest after what will have been a hectic few weeks and in anticipation of another 6 weeks of hard work – including two Glasgow Derbies, one of which has the Betfred Cup on the line.

There are spaces for ex-Celts, David Marshall, Stuart Armstrong and Oliver Burke; however, Arsenal’s Kieran Tierney and Wigan’s Charlie Mulgrew haven’t made the cut.