You are at:Home»Latest»Nottingham Forest v Celtic – Your Personal Experiences of that awful crush

Last night we looked back on a UEFA Cup tie between Nottingham Forest and Celtic from 23 November 1983 at The City Ground in Nottingham when the police acted in a manner that would just a few years later prove to be fatal at Hillsborough.

The game ended goalless and although Celtic were the better side it is perhaps fortunate that no goals were scored given the chaos that the celebrations could have caused. It was a dangerous place to be at that particular game.

We asked for some supporter memories from that night and as usual our readers have delivered. We’ll feature some of these below but for those who need to catch up here’s the original article from last night on The Celtic Star… 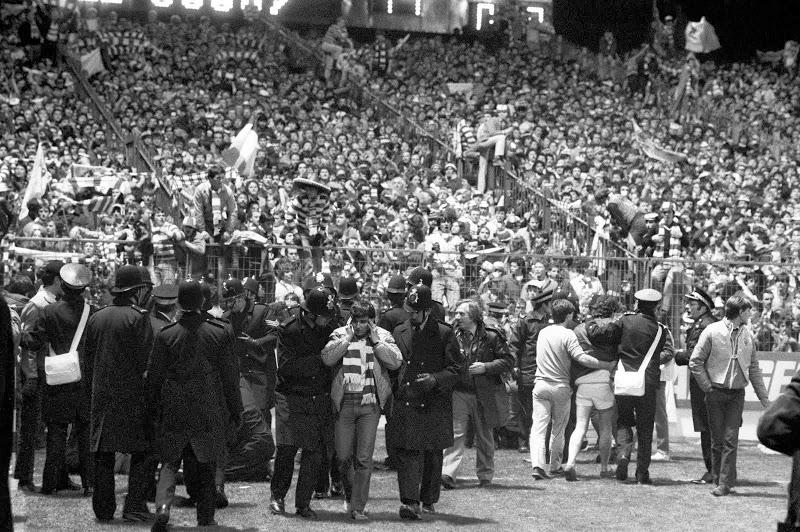 I was at the game in Nottingham. It was a very cold day and evening but it didn’t have an effect on the supporters enthusiasm. I can remember some fans actually dancing in some water fountains in the town centre even though the temperatures were so low.

We went along to the ground in plenty of time for the kick off and it was obvious that at that point many had turned up without a ticket.The police were having difficulty controlling the large numbers assembled. I cannot remember any bad behaviour or trouble of any kind from the Celtic supporters.

The police eventually opened the exit gates and hundreds walked in with or without tickets. I did have a ticket and sensed that because of what I witnessed outside the ground. ie.The very large crowds, that there was now the potential for crushing within the stadium. I decided to watch the game from the top of the terracing as the crushing was not as severe.

From this point I could observe where the worst of the problem was. Right down in the corner near one of the corner flags it was apparent that people were being crushed and there was no way that they could escape from the danger that they found themselves in. My recollections of how the crushing was stopped and then the subsequent wrongly described pitch invasion by the fans ,was that a fan or fans within the area worst effected by the overcrowding needed assistance from the first aiders.

When the first aiders opened the gate on the perimeter fence to help the supporters, many fans took the opportunity to escape from the potentially fatal situation they found themselves in. This resulted in hundreds of fans being on the track and the pitch as well. The fans had to do something to help themselves because no body in authority seemed to understand what was happening it’s a miracle that no one died that night.

I left the ground long before the game finished and returned to the bus, I was fearful of crushing leaving the ground and also very angry at the incompetence of the Nottingham Police force and the way that they handled this major sporting event. Watching the highlights on television a couple days later I was disgusted to see Brian Clough manhandling some Celtic fans who he had thought were causing trouble.

Five of us traveld down to Nottingham by car, we arrived early morning on the day of the game, got a good breakfast inside us, then went round a few pubs, we ended up in a pub called The Narrow Boat, and the landlord was brilliant with us, let us go behind the bar and took photos of us holding up the tricolour while singing the Celtic songs. We stayed there all day, got on great with the locals, who where mainly Notts County supporters.

Near the time of the kick off, the landlord even drove us to The City Ground in his car, when we got there, there was thousands of Celtic fans outside the ground trying to get in, one of the big gates got put in or was opened up by the police.

We managed to get in, but couldn’t get any further than the first pen, and it was heaving, I knew it was going to get worse, and I was one of the fans that climbed up the floodlights, got a great view of the game, but it was freezing, parts of the pitch which were shaded all day were still frozen, but it was never going to get called off, because of the size of the Celtic support, which filled three quarters of the ground.

Nottingham never knew what hit them, and Clough acted like a clown, when the Celtic support had to go on the pitch to get away from the crush in the corner of the ground.

Celtic should have won the game down there, and we paid the price at Celtic Park when they put us out, it could have been easily a disaster if the fans hadn’t gone onto the pitch.
The trip was great, we got well looked after, but you put fans into pens and too many turn up, it’s a disaster waiting to happen, and it did at Hillsborough.

Got to keep the faith, hail hail. 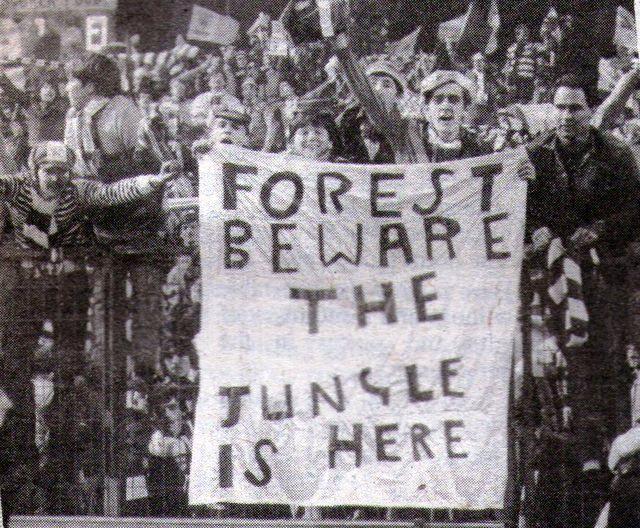 I was working in London at the time. Knowing that tickets would be like gold dust I managed to get 4 tickets from a work colleague whose husband was a Forrest season ticket holder! We travelled up on the train at 10 am (crammed with Celtic fans) and spend the day in the town centre pubs. A huge Celtic support descended on the city and we met lots of locals who could not believe the volume of supporters who were there.

An older guy we met was reading the local sports paper which mentioned the return leg “at Celtics 67,000 capacity Glasgow ground”  he asked if it was a misprint !! We also witnessed some pockets of violent behaviour mainly from Forrest fans.

I recall waiting for ages to get in the small number of turnstiles with what seemed to be thousands outside, I was almost there when a huge surge pinned me against the wall immediately to the left of the last turnstile. I knew if I didn’t get out of there quickly I would be in bother and a second later when the pressure eased, I managed to wrestle myself into the turnstile. I remember the operator saying “ Just Go, go, go” wasn’t even interested if I had a ticket and that is what caused the problems inside the ground.

For about 15 minutes after that the crowd poured in, resulting in terrible crushing and fans spilling onto the pitch. Looking back it was a very dangerous situation, but Thank God no one was seriously hurt as far as I recall.  As for the game, my abiding memory is Murdo MacLeod missing a great chance near the end to give us a first leg lead but alas we were knocked out in Glasgow. HH 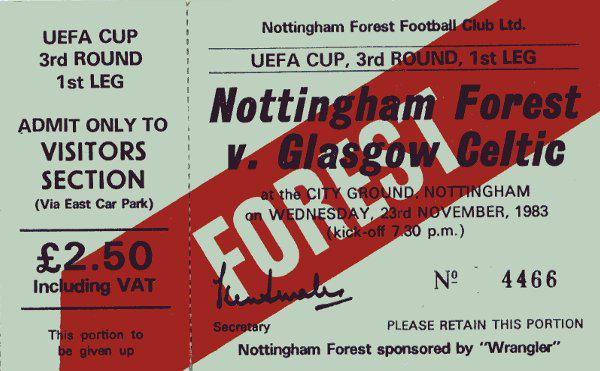 Nottingham Forest vs Celtic – I was at the game, my dad took myself and my brother to the City Ground, I was 13 years old and remember the crush, we ended up in the Main Stand where we were okay. Went to return at Parkhead, think Davenport scored.

I was at the game , a bit worse for wear I ended up in the wrong end of the ground , opened my coat to get my smokes out of my inside pocket , a police saw my Hoops grabbed me and said “Celtic is it ? “ then took me round to the Celtic end, opened one of the cages and threw me in. It was packed, but being honest I glad of the body heat as I’ve never been so cold at a game of football. 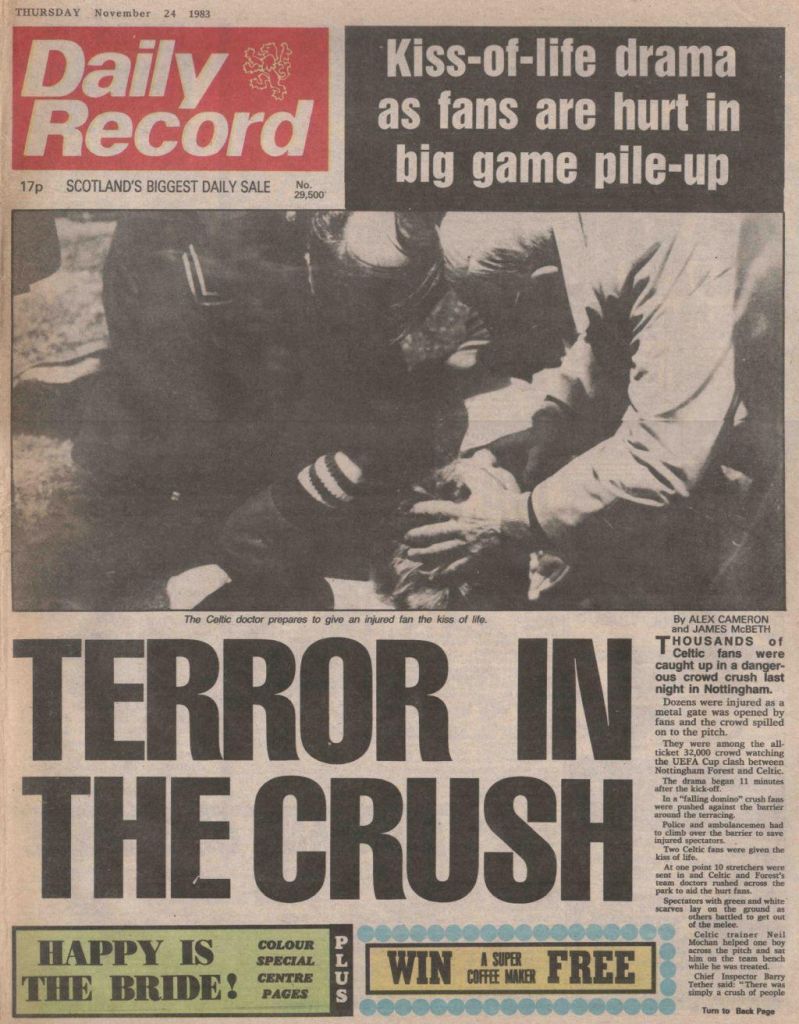 I was at the Forest game that night, loads of Celtic fans had tickets for the away end( Trent End. )I along with most of my mates had them, we were taken round to the away end through the turnstiles around the pitch and put into one of the pens. I never got to see the game as I spent it being pushed up and down the terrace, was relieved when the game finished, spent the whole game squashed and struggling to breathe.

I was at Nottingham. Travelled down with  the Sons of Donegal Club who ran two buses, such was the demand.  We arrived in good time and got good position on the terrace behind the goal but it just seemed to get filled up extremely quickly and we were pushed to the front and I remember a giant cop lifting us over the fence on to the track where we were directed to the main stand area which had lots of room. Sadly it was a game we should have won but Forest showed in the return game how good a team they were. Hail Hail

WHERE YOU AT THE CITY GROUND 37 years ago for the UEFA Cup game between Nottingham Forest and Celtic? If so we’d like to hear more of your stories of what happened to you that night. Please email editor@thecelticstar.co.uk

Previous ArticleHe’s Going Nowhere – Neil Lennon given vote of confidence to go for the Ten
Next Article The End is Nigh – Lennon, Kennedy and Strachan is a Lawwell Production that’s run its course