You are at:Home»Latest»“Oh Harry, Harry…Oh Harry Hood”: A first Hampden hat-trick for Harry as Celts adapt to their temporary home

Following his injury disappointments at the tail end of the previous campaign, Harry Hood’s 1972/73 season commenced at Gayfield Park, Arbroath on Saturday, 19 August, as Celts continued to make progress through a rather uninteresting League Cup section which also included Stirling Albion and East Fife. 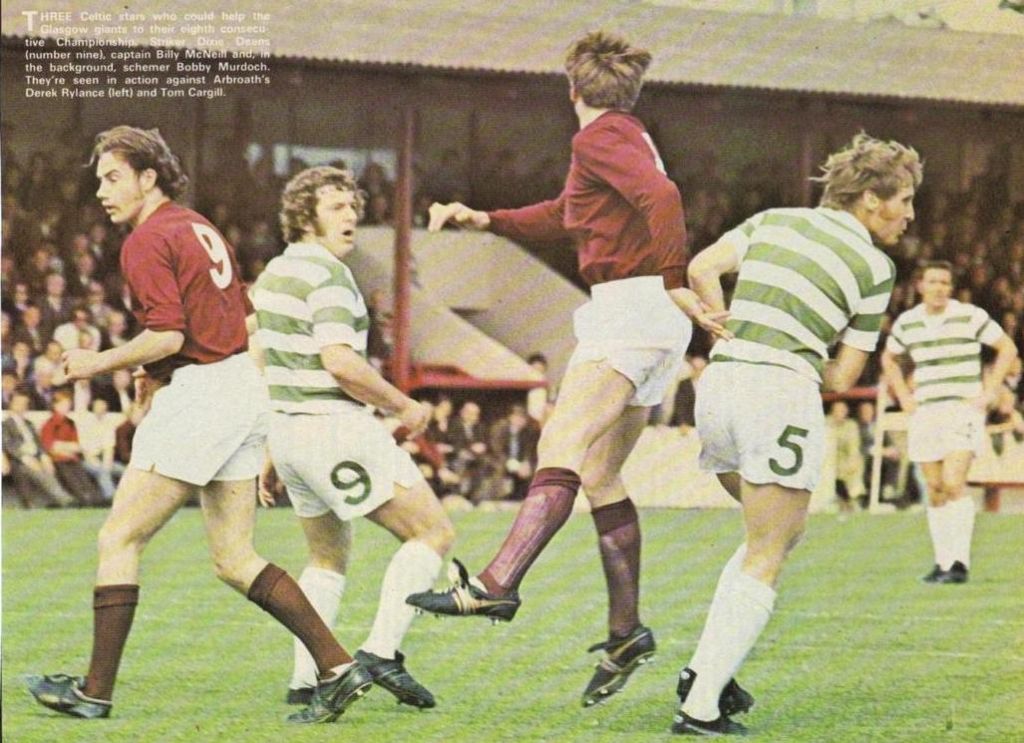 The newly-promoted Red Lichties would be no match for Jock Stein’s Double Winners, sporting their new kits with the white v-insert collar, as the group reached the halfway point with a 5-0 victory for Celtic. Kenny Dalglish and Dixie Deans showed the early fruits of what would be a prolific striking partnership that season with their own doubles apiece after Bobby Murdoch had opened the scoring from 12 yards, use of the P word still a bit raw around Celtic supporters after the events of April, Dixie and Inter Milan.

Dalglish would grab another brace in midweek as Celts returned to Bayview Park, Methil, the venue of their historic seventh successive title victory four months earlier. The Hoops would again take a 3-0 lead – Bobby Lennox having opened the scoring – as they had that day, before two late Kevin Hegarty goals made the scoreline look tighter than should have been the case. And qualification was secured on Matchday 5, Saturday, 26 August 1972, as once again a Bobby Murdoch spot kick was followed by goals by the Terrible Twins, Dalglish and Deans, albeit only one apiece this time in another 3-0 win, this time over Stirling Albion at Parkhead. 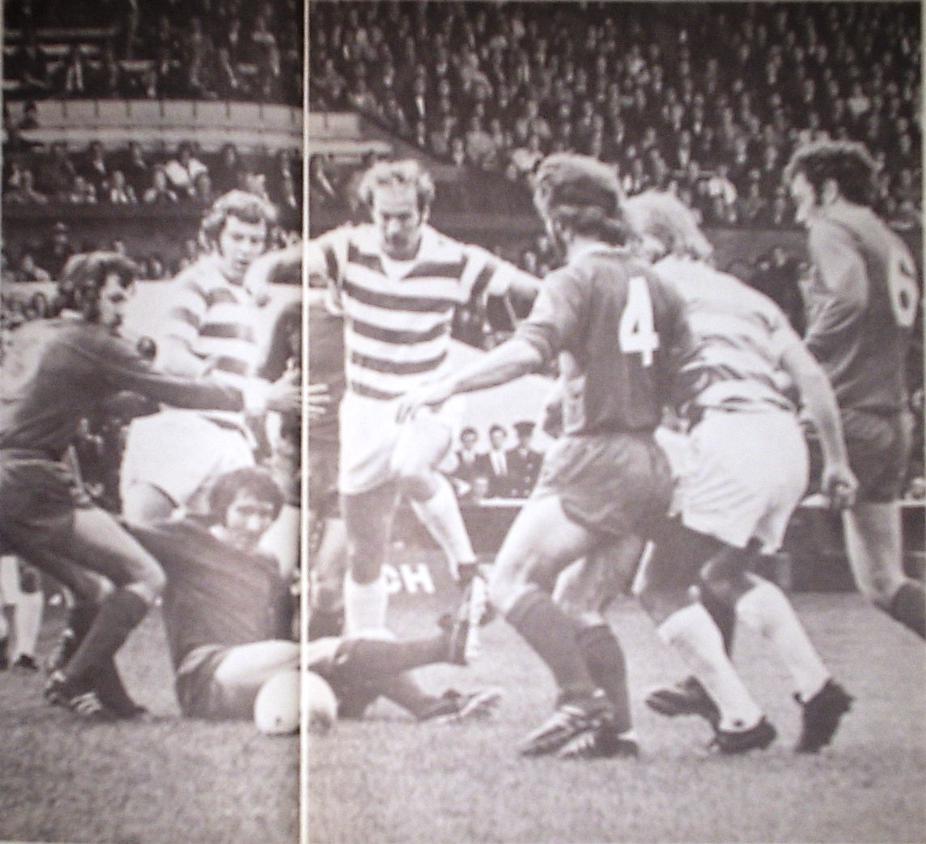 I remember the final match well, although not for the greatest of reasons. The home game with Arbroath had already been moved to Hampden to facilitate work on the press box which was suspended from the new stand roof at Celtic Park, however, 24 hours earlier a fire had damaged the stand itself, presumably adding to the complications and subsequent delay in playing matches again at our spiritual home.

The Hampden experience that Monday evening in August 1972 was entirely surreal, just 5,000 spectators in the vast arena measured to hold 150,000 plus. A young Arbroath forward would have better memories of this match though, enjoying the night of his football life by scoring a hat-trick against the side who had been a PK away from the European Cup final just four months earlier. Derek Rylance opened the scoring with his first-ever goal for the Angus club, then added two more late on as Arbroath fought back from 3-1 down to share the points. 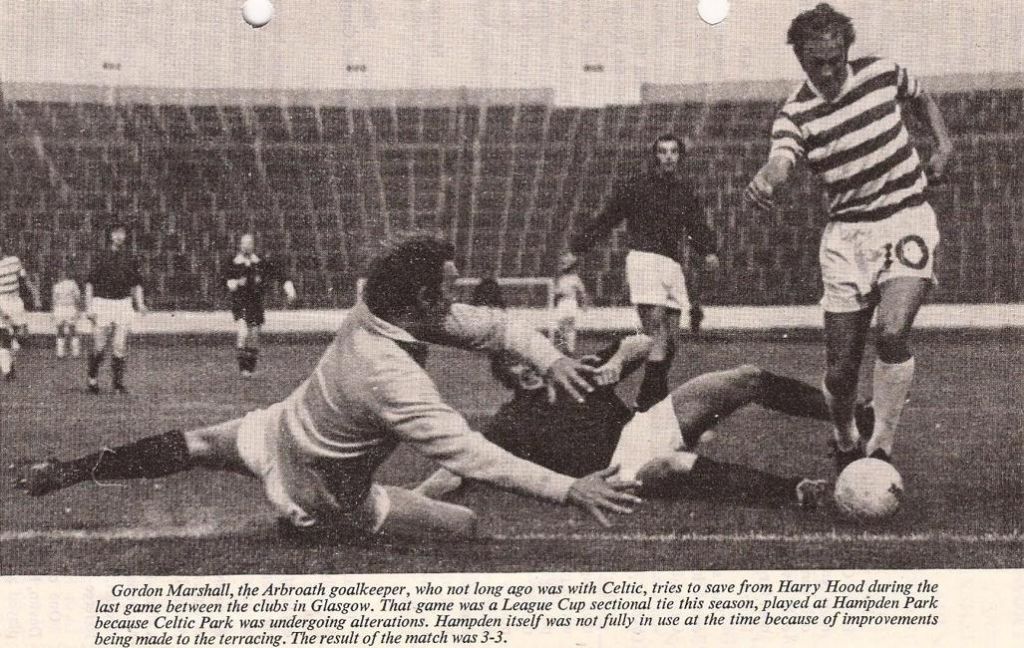 Harry Hood had opened his own Celtic account for the season to put the Hoops 2-1 ahead just before the interval, after the unfortunate Cargill had beaten Gordon Marshall to level things off on the half-hour. Kenny Dalglish had appeared to secure the win on 57 minutes before Rylance completed his own piece of football history. Celtic Wiki photos of this match show that the team wore the old crew neck kit that evening. 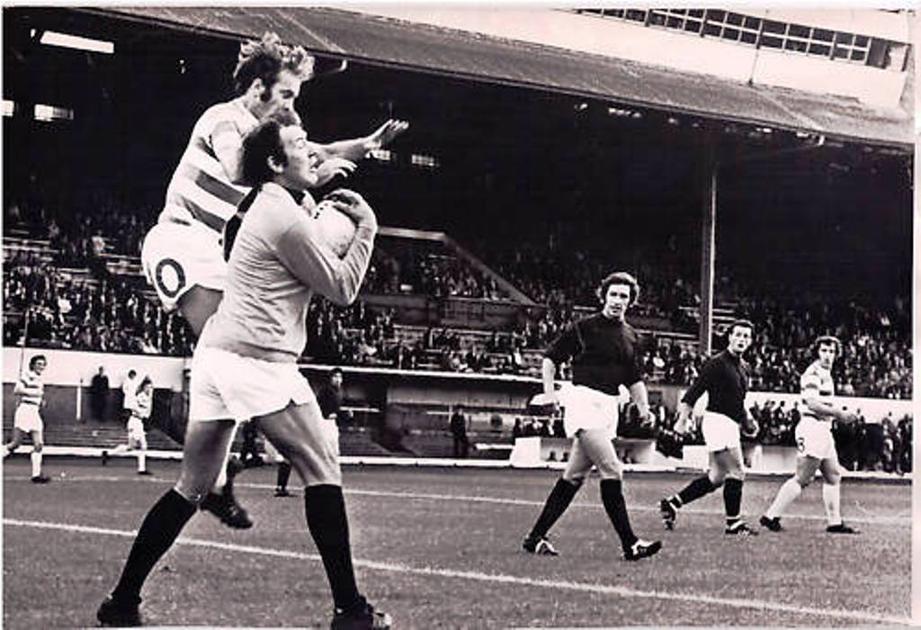 Celts started their quest for an eighth successive League title with another strange experience five days later, Saturday, 2 September 1972. The opening match of the campaign against Kilmarnock would again be at their temporary Hampden home, a combination of that and a 7pm kick-off on a Saturday night reducing the attendance to under 12,000.

Not that this seemed to bother the players so much, Harry Hood netting a hat-trick and Dixie Deans a double as only Ally Hunter in the Killie goals kept the score at six. The Ayrshire club did manage a couple of their own with Bobby Murdoch’s late shot from 12 yards allowing the champions to declare at 6-2. 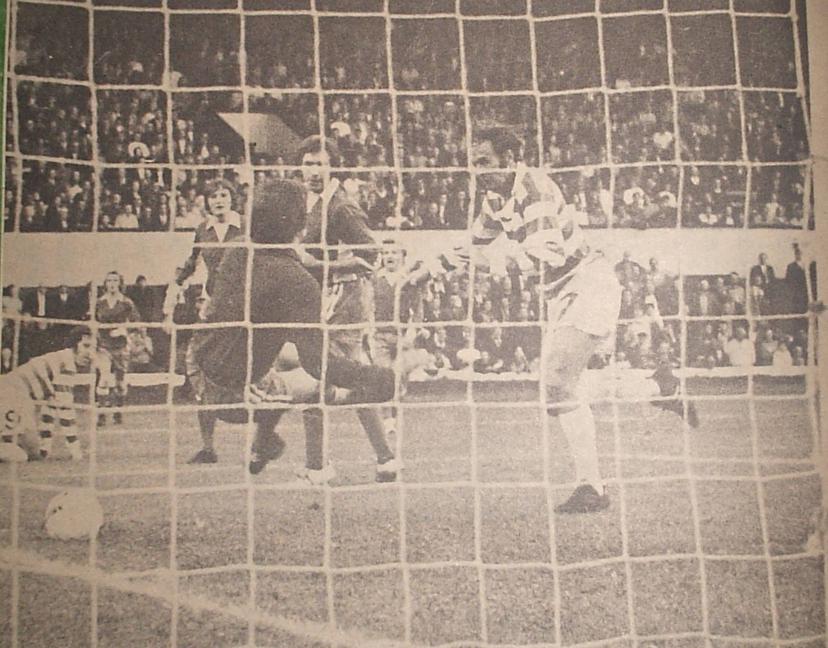 There was an additional 3,000 on the gate as Celtic visited Cappielow the following Saturday, a Bobby Murdoch double beating a Morton side which included his old friends John Clark and Stevie Chalmers, and then it was back to a sparsely populated Hampden in midweek as the Bhoys faced Norwegian champions Rosenborg Trondheim for the first time.

Less than 20,000 were on the slopes as first-half goals from Lou Macari and Dixie Deans appeared to have the job pretty much done before a Wirkola effort after the break made the trip to the Arctic Circle that bit more daunting. The Rosenborg keeper that night, Geir Karlsen, would suffer a broken ankle in a collision with Macari and was stretchered off. He would later follow in the footsteps of Aarhus keeper Bent Martin, by starring against Celtic in Europe then trialling at Parkhead before making his name at Dunfermline Athletic.

Like the ‘Hampden season’ which would follow two decades later, highlights of this temporary decant were like supporters who enjoyed the experience, thin on the ground, however, one would certainly be the early afternoon of Saturday, 16 September 1972, when the Hoops beat Rangers 3-1 in the most one-sided of derbies before 50,000 spectators. The match was finished before most folk had enjoyed their lunch, Kenny Dalglish within two minutes, Jimmy Johnstone with his obligatory strike 15 minutes later then Lou Macari five minutes after the break all beating Peter McCloy, with the missed opportunities bordering on the farcical. Harry Hood replaced Jinky with 12 minutes remaining and would witness first-hand the sight of John Greig scoring a consolation goal in the dying seconds which drew huge cheers from the Celtic support in the ground, the Rangers captain acknowledging the applause with a raised fist. Strange times. 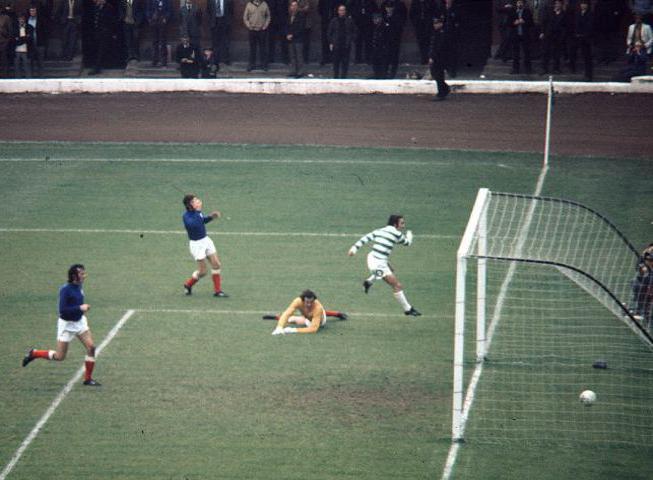 Two nights later, an unchanged Celtic team faced Manchester United at Old Trafford in a testimonial game for the legend that is Bobby Charlton. It would be a first-ever appearance at the Theatre of Dreams for Harry Hood, who had missed the only match between the clubs in Lancashire during his spell at Sunderland, however, the United side did feature three men who had faced Harry at Roker Park on Wednesday, 24 February 1965, when he had scored the goal which beat the English champions-elect in front of over 50,000 cheering Wearsiders. These would be the original Englishman, Scotsman and Irishman, as referred to in the various jokes of the day, in this case the great Charlton himself, Denis Law and Tony Dunne. 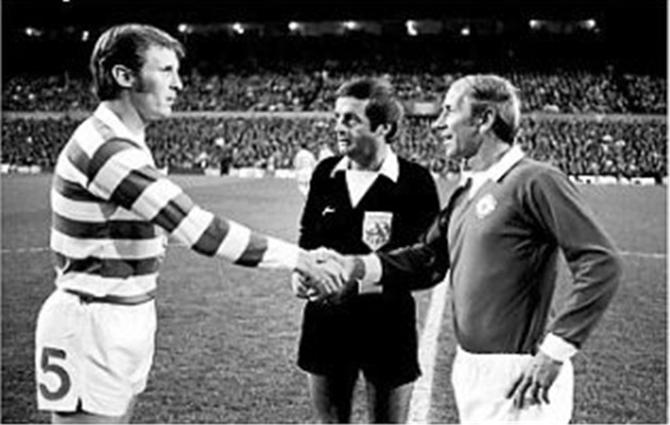 The attendance at Old Trafford for Celtic’s visit on Monday, 18 September 1972, was actually a record for a testimonial match on these islands, almost 61,000 cramming in to watch the first two European champions from outwith the continental mass fight out a goalless draw. Hood would replace Jimmy Johnstone for the entire second half, as Jock Stein went with an unchanged starting line-up from that which had enjoyed the stroll over Rangers at Hampden.

And the change of setting could hardly be more pronounced as Celts travelled north from Manchester to pay a maiden visit to Stair Park, Stranraer, two nights later, Harry back in the team as goals from Vic Davidson and Bobby Lennox gave the Hoops a 2-1 advantage in the first leg of their League Cup quarter-final tie. 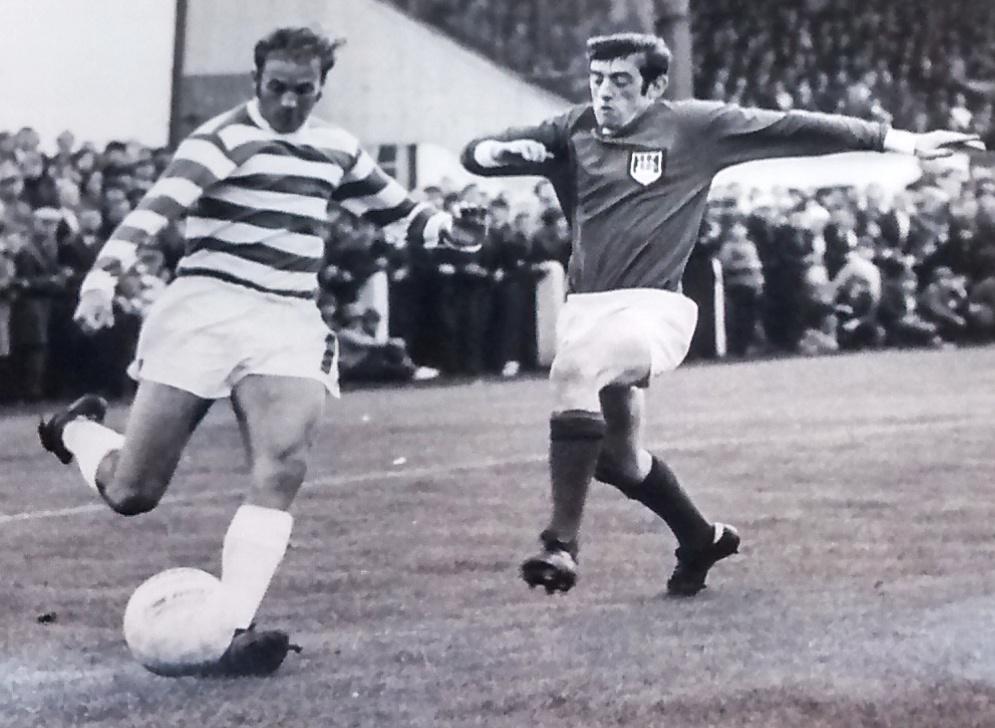 The following midweek saw another first as Jock Stein’s men looked to complete the task of qualifying for the second round of the European Cup in Celtic’s debut competitive match in Norway. There were shades of the defeat in Copenhagen 12 months earlier as Rosenborg took the lead before the interval in the Lerkendal, however, last season’s European hero Lou Macari had tied things on the night by the hour, before late goals from Harry Hood and Kenny Dalglish saw Celts through on a comfortable if not entirely convincing 5-2 aggregate. 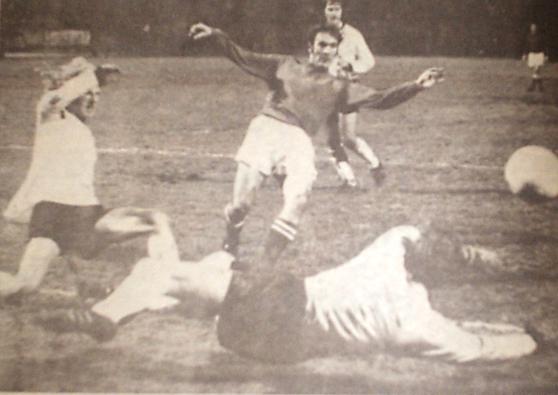 The last day of September saw the Celts finally return to Paradise, the home match with Ayr United preceded by the unfurling of the 1971/72 League flag by Desmond White’s sister. All the flag poles above the Jungle were proudly displaying the corresponding banner from each of the seven glorious seasons in the run, with the one nearest the Celtic End of the ground flying a special ‘7-in-a-row’ commemorative flag. As often happens on such occasions, the game itself was fairly low key, an early Dixie Deans header separating the teams at the end of 90 minutes.