You are at:Home»Latest»“Oh Harry, Harry…Oh Harry Hood”: A full gauntlet of emotions for Harry

With the Italian Job successfully completed after a narrow defeat in Florence – Celtic thus becoming the first British side to win a two-legged tie against Italian opposition – Harry Hood celebrated the first anniversary of his signing at Parkhead by winning a second successive League title. Having failed to beat Aberdeen at home in midweek, the point required was secured by a Celtic side minus a number of first-team players at Tynecastle on Saturday, 28 March 1970. 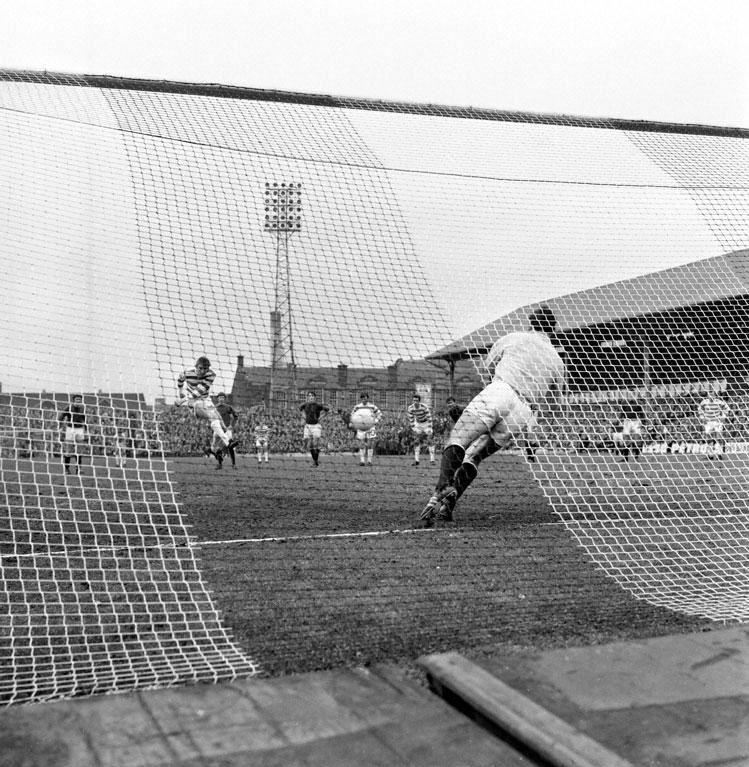 How my dad managed to secure a day pass on what was my sister’s seventh birthday is another matter entirely, however, the charm offensive obviously worked, he and I travelling through that morning for what would be my first visit to Edinburgh and the first time I would see us win a trophy. A wonderful Celtic ‘rite of passage’ day. It would have been absolutely perfect had Jim Cruickshank not saved Tommy Gemmell’s penalty early in the second half denying Celts the win, Harry Hood then replacing Jimmy Quinn as the Hoops effort ended in a 0-0 draw. Still, it was five-in-a-row for Stein’s men and Harry maintained his own record of having won all five competitions Celtic had entered since he joined in March 1969. 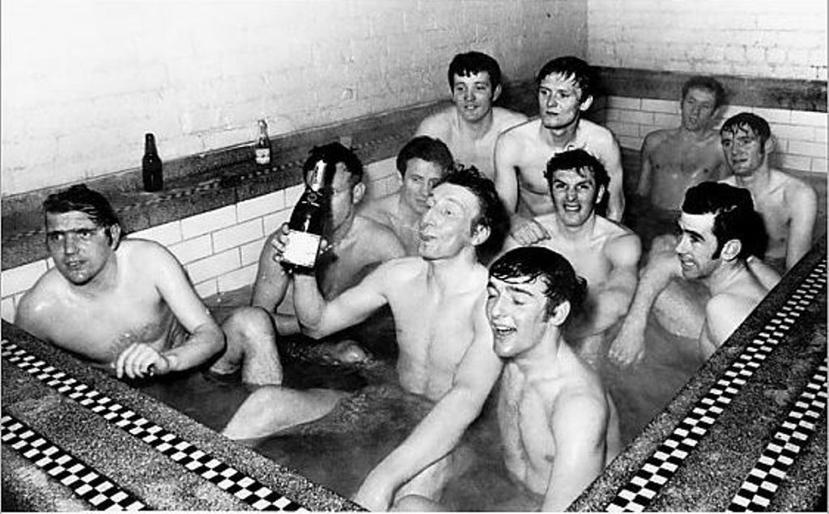 The first day of April saw Celts in Yorkshire for a much-awaited ‘Battle of Britain’ at Elland Road in the first leg of the European Cup semi-final. Stein’s preference had been Feyenoord, however, for once the draw didn’t listen and, instead, he got “the final before the final,” just as with AC Milan the previous season. The Celtic manager once again played a master stroke, young George Connelly wearing the number eight shorts to match his bright orange socks, with Harry Hood on the bench. 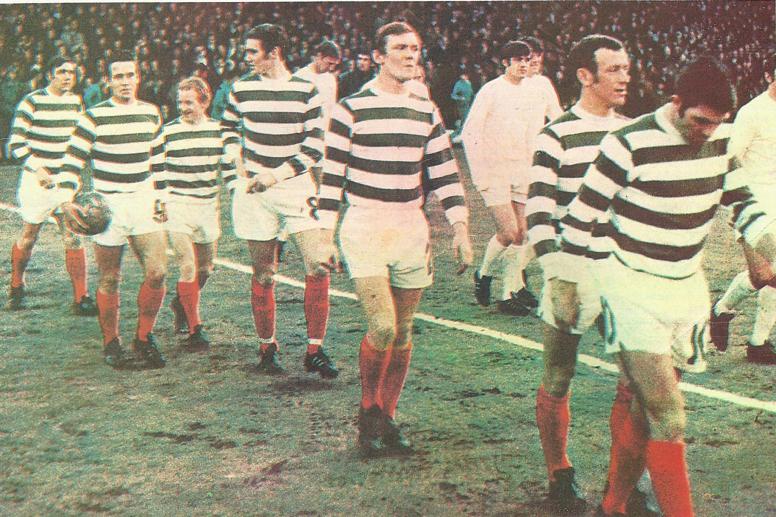 Connelly would score the only goal of the game within the first minute and Celtic would not look back. It was the first goal Leeds had conceded at home and the first the Hoops had managed on the road in that season’s European Cup. Both of those records should have read ‘first two goals,’ Connelly repeating the feat in the opening minute of the second half and becoming the latest Celt to have a goal mysteriously disallowed. Still the win was a win and a big one at that.

Harry would again remain on the bench two weeks later, as the biggest crowd in the history of European competition, 136,505, crammed into Hampden Park to watch Celts complete a home and away double over the pride of English football, John Hughes and Bobby Murdoch scoring early in the second half after a rocket from Celtic-daft Leeds skipper Billy Bremner had flown past Evan Williams to level the tie.

Four days earlier, Harry had not been part of the team at the same venue as Bobby Davidson and Derek MacKay won the Scottish Cup for Aberdeen, my first Hampden final and a game I still find it difficult to write about 50 years down the line. Suffice to say it was Bobby Lennox’s name which came out of the hat that day to have a vital Celtic goal disallowed, the Airdrie official then denying a blatant penalty for a foul on the same player having earlier awarded Aberdeen a spot kick when the ball was driven against Bobby Murdoch at close range. He would enjoy his Saturday night after his very own three-card trick.

Seven days later, the League campaign ended with a 3-2 victory at Love Street, my first visit there and a debut for Vic Davidson. Harry Hood would equalise an early Blair strike from a corner five minutes before the interval, young Davidson grabbing his first goal two minutes later. Tommy Callaghan would seal the points for Celtic early in the second half, Blair adding his second just before the final whistle as the curtain came down on another domestic season. 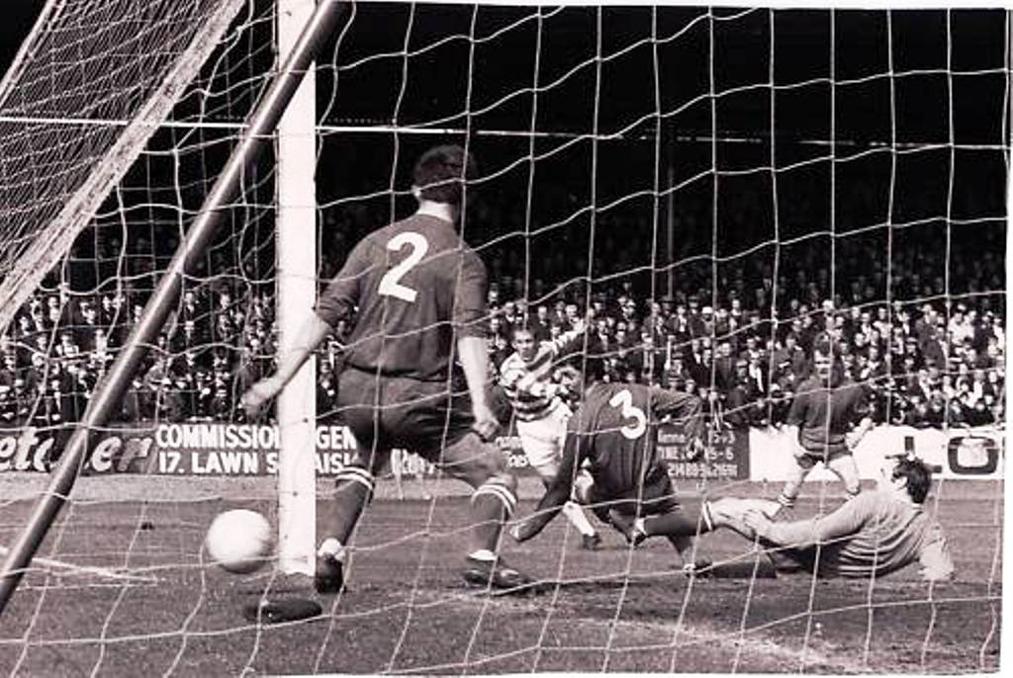 Celtic would then have an 18-day gap to plug before the European Cup final with Feyenoord in Milan on Wednesday, 6 May 1970. Harry would no doubt be extremely disappointed at not being named amongst the 12 players chosen to win a second crown for Celtic against the Dutch underdogs. That pain would be mirrored within a couple of hours by all of those with Celtic in their hearts across the world, after the dream died in what was best summed up by the newspaper headline “Lisbon in reverse.” The biggest “if only” in our history, for me.

Hood and Celtic would bounce back in spectacular fashion the following season, 1970/71. This would prove to be his personal triumph as the Bhoys retained their title – a sixth consecutive win equalling the record set by Willie Maley’s Bould Bhoys 60 years earlier – whilst regaining the Scottish Cup on a wonderful May evening at Hampden.

Earlier in the season, Harry Hood had been a virtual ever-present as Celtic reached a seventh successive League Cup final, the only surprise being the lack of goals from the prolific hitman as he started all six section games before making way for the final 25 minutes at Tannadice to allow young Danny McGrain a Hoops debut. I wonder whatever happened to Danny Bhoy? 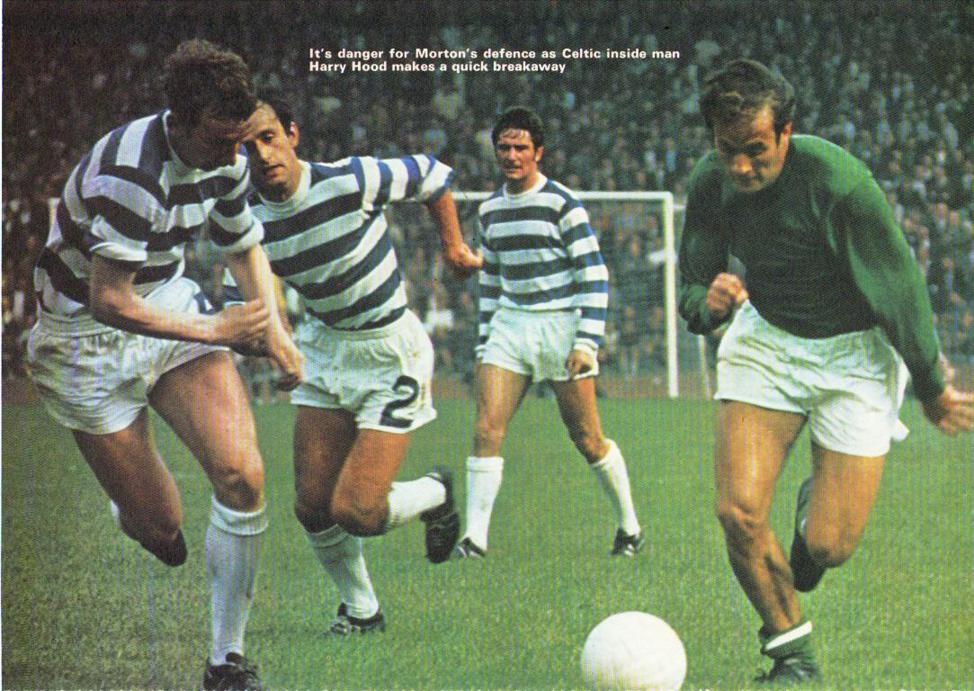 Harry’s form saw him selected for the Scottish League side which faced the League of Ireland at Celtic Park on Wednesday, 2 September 1970, one of four Hoops men playing on home soil that evening. David Hay and George Connelly were also making their debuts at this level whilst there was a fifth appearance for Jimmy Johnstone. Connelly scored the only goal of the game just after the hour, before a disappointing crowd of 8,000. 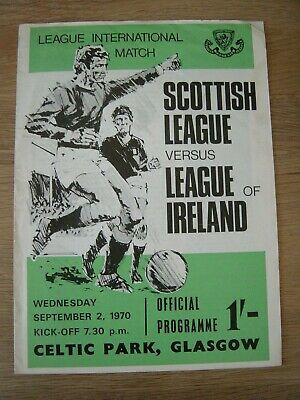 Hood did get off the mark domestically, and in some style, on Wednesday, 23 September 1970, his bullet header giving Celts a two-goal cushion in the second leg of their League Cup quarter-final tie against Dundee at Parkhead, a 5-1 win on the night seeing Jock Stein’s men through on a 7-3 aggregate. 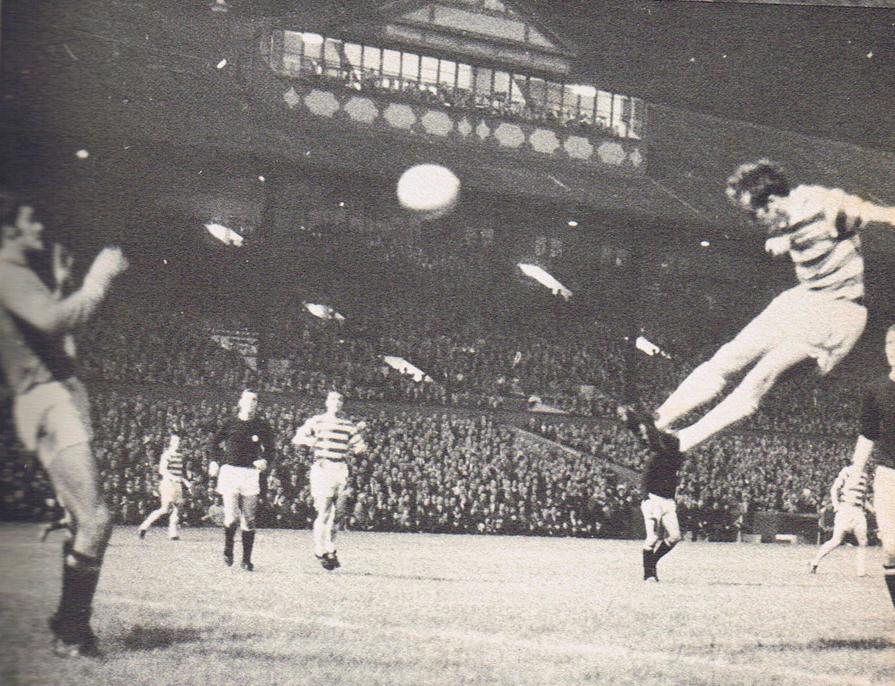 The previous Wednesday had been a landmark occasion for both Harry and myself, together with the late and much-missed Paul Wilson. Finnish champions KPV Kokkola were the opposition for my first European Cup match, the Celtic striker marking the occasion with his first hat-trick for the club in the opening 35 minutes.

With a 6-0 lead at the interval, Jock Stein withdrew Harry Hood and Davie Hay and introduced youngsters Vic Davidson and Paul Wilson to the fray, a debut for the latter. Paul would score twice either side of a Davidson goal as the yellow-clad Celts set a European goals record for the club which stands to this day.

October saw Celts paired with Second Division Dumbarton in the semi-final of the League Cup at Hampden. There would be no goals on a night when recently-freed Charlie Gallagher was the man-of-the-match and the Hoops played for around 40 minutes with 10 men after an injury to Bobby Murdoch, during which time Sons keeper Laurie Williams saved a Willie Wallace penalty.

Gallagher would score from the spot in the Hampden replay, five days later, to start the Dumbarton fightback from 0-2 and it would take extra-time before Celts edged a seven-goal thriller. Harry had missed the game after struggling with a severe nosebleed before kick-off, the first League Cup-tie he had not started that season. He would be back in the side which faced Rangers in the final at Hampden on Saturday, 24 October 1970, a first-half header from 16-year-old striker Derek Johnstone making it three final defeats in different competitions in succession for Celtic and ending the grip on this particular trophy they had enjoyed for five years. 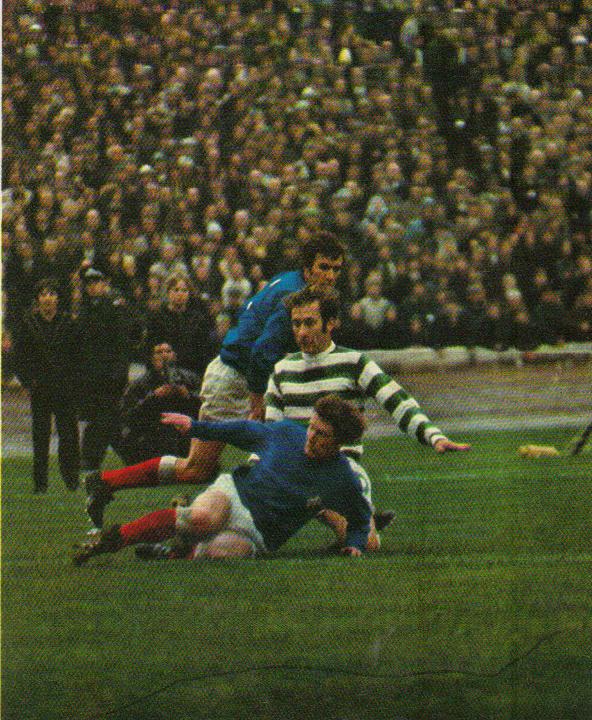 Meanwhile, Celtic were making progress on another two fronts as Harry enjoyed the best form of his career, prompting suggestions of a full international call-up. Hood scored twice – a header followed by a sublime shot from distance – and set up the other for Bobby Lennox as the Hoops beat Airdrieonians at Broomfield, his direct opponent that afternoon being Pat Delaney, the son of 1930’s Celtic great Jimmy.

And he was on target again with the winner on Wednesday, 28 October 1970, as Celtic immediately bounced back from that Hampden defeat by recovering from two goals down against Hearts at Parkhead with just 25 minutes remaining to win 3-2, Jock Stein’s men showing the courage of champions. But Harry saved his best for the last day of the month, at Fir Park, Motherwell. On a pitch covered in muddy puddles which would have had Peppa Pig declaring a huff, Hood ran riot, scoring a hat-trick as Celts won 5-0 to end October two points clear of Scottish Cup-holders Aberdeen at the top of the table. 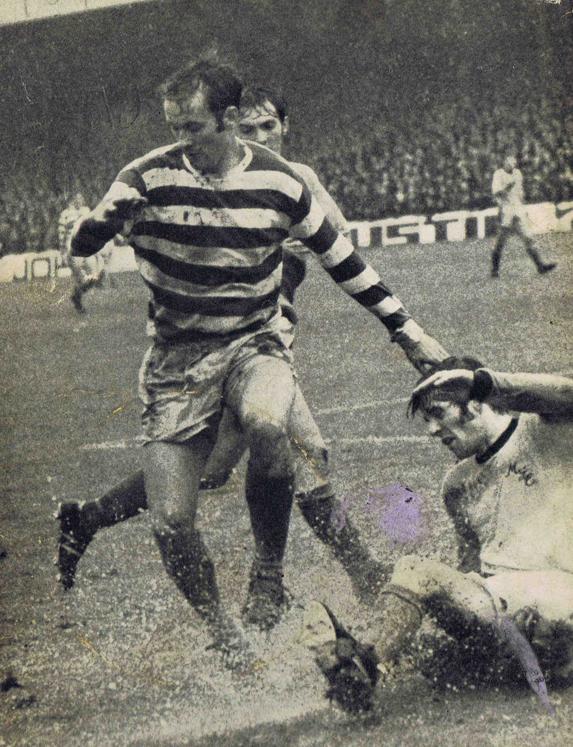 There was another monsoon as November commenced with the return leg of the European Cup second-round tie against Waterford United at Celtic Park, a first pairing in continental competition of the Hoops and the country which had brought about its existence some 80 years earlier. The first leg had been moved to Dublin to accommodate the 50,000 who rolled up, Celts wasting no time in scoring the first of their seven goals on the night without reply directly from kick-off. The Glasgow match would play out very differently, Celts 2-0 down at the break before the introduction of Harry provided the platform for a second successive Parkhead recovery from that position to win 3-2. There was a brief blip as Hood missed a penalty in the 3-0 win over promoted Cowdenbeath at the same venue the following week.

There would be personal heartbreak for Harry as he took his first steps into business by opening a hotel in Uddingston, losing both parents within a three-week spell as November became December. He would miss out on the Hoops visit to London to play West Ham United in Bobby Moore’s testimonial after the passing of his father, then bravely turn out against St Mirren at Parkhead on Saturday, 28 November 1970, setting up Tommy Gemmell’s early opener before being replaced by George Connelly in Celtic’s 3-0 victory, which kept them one point ahead of Aberdeen at the summit.

Harry would then suffer the tragic loss of his mother, returning on the bench for the top-of-the-table clash with the Dons at Celtic Park on Saturday, 12 December 1970, a match which drew an enormous crowd of over 63,000 to the east end. Trailing to a Joe Harper header on the hour, Jock Stein introduced Harry for George Connelly in a last throw of the dice. Whilst Hood would improve Celtic’s performance, he would be unable to conjure up a goal as Eddie Turnbull’s men moved clear at the top. Game on. 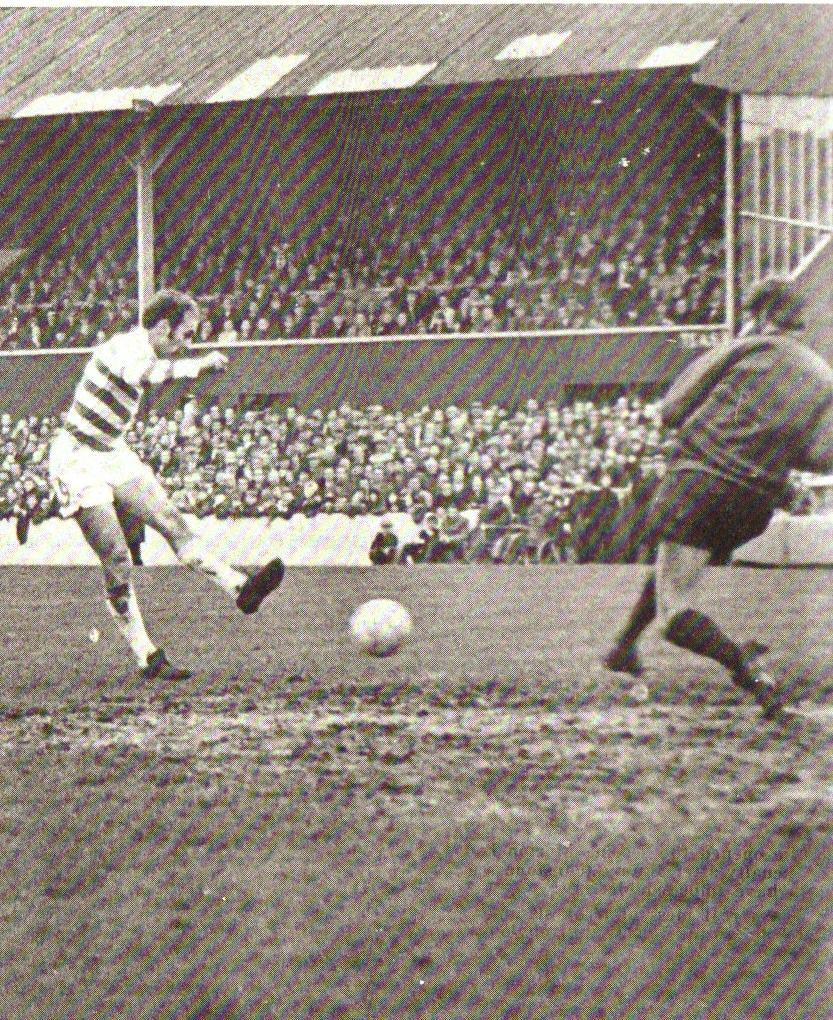 Celtic would finish 1970 with two victories. Seven days after the defeat by Aberdeen, Harry Hood would score what proved to be the winner in a 2-1 win over Ally MacLeod’s Ayr United at Somerset, John Hughes memorably scoring directly from a corner that day.  And 24 hours after what must have been the saddest of Christmas Days for the Hood family, Harry was in action for Celtic at Cappielow, as Stevie Chalmers marked his first domestic appearance of the campaign with the opener in a 3-0 win over Morton, Bobby Lennox and Willie Wallace then securing the points before the interval.

It had been a roller-coaster of a year for Harry Hood, professional highs and disappointments mixed in with the most personal anguish.

He would no doubt be hoping that 1971 would be kinder in both areas.

Thanks, as always, to the wonderful Celtic Wiki. More to follow on The Celtic Star and please read back to catch up with the earlier instalments in the Harry Hood story.

Previous ArticleVideo: Incredible roar from Celtic end as Forster denies Morelos
Next Article “This must not be allowed to happen with Celtic,” David Potter