You are at:Home»Latest»“Oh Harry, Harry…Oh Harry Hood”: Advantage Celtic in the quest for Nine, following victory at Ibrox

If Harry Hood had been disappointed to remain on the bench as Celtic clinched an eighth successive League Championship at Easter Road, then he would undoubtedly have been heartbroken to miss out on the Scottish Cup final against Rangers, seven days later, Jock Stein going with the same line-up but selecting Bobby Lennox as his substitute on this occasion.

With a Treble Double up for grabs, Saturday, 5 May 1973 would sadly not be Celtic’s day, a miskick from the late Tom Forsyth on the hour trundling barely over the line for Rangers’ winner, his first-ever goal for the club. Earlier, the match had swung one way then the other. Kenny Dalglish had scored a terrific opener for the Bhoys midway through the first half, his third cup final goal, following great work from Dixie Deans. Goals either side of the interval from Derek Parlane and Alfie Conn then saw the Ibrox club lead briefly before John Greig dived full-length to deny Deans the cup final goal he deserved, the Ibrox skipper punching the ball clear on the line. 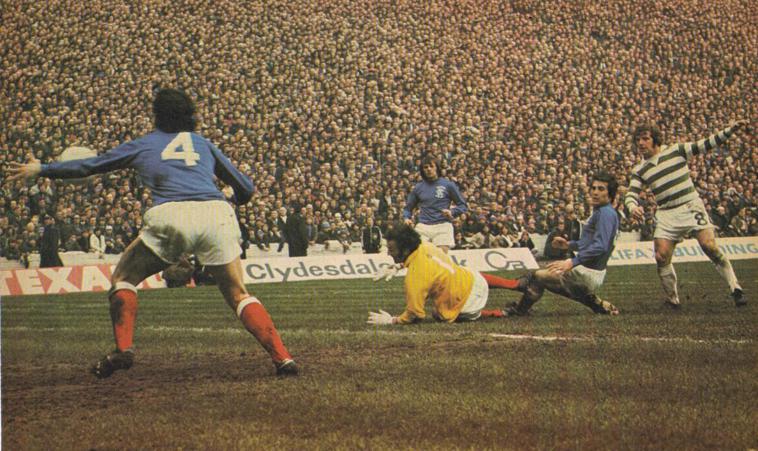 The bizarre rules in place at that time meant that the only punishment for such a blatant act of cheating by Greig was the award of a penalty to Celtic, a penalty which could quite easily be missed! Thankfully, Scotland’s Player of the Year, George Connelly, stepped up to take the most exquisite spot kick, sending Peter McCloy for chips as the ball nestled sweetly in the net for his second Scottish Cup final goal in four seasons against the same opposition. Within 10 minutes, however, Forsyth would have his moment in the sun as the scoring ended at 3-2. 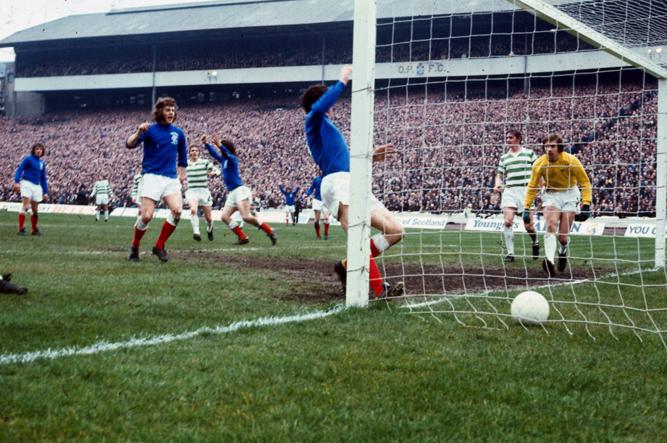 The two Glasgow rivals were paired once again as the 1973/74 season kicked off with the League Cup sections, Arbroath and Falkirk the unfortunate makeweights in the group. Harry would be in midfield with new £50,000 signing Steve Murray from Aberdeen as an unfamiliar looking Celtic attack with Brian McLaughlin and Andy Lynch on the flanks beat the Red Lichties 2-1 on Saturday, 11 August 1973. Hood was replaced by Dixie Deans in the second half after injuring his hand, the new rules now introduced seeing two substitutes available to clubs. The roles would be reversed in midweek as Harry came off the bench following a sickening clash at Brockville which left Dixie with a fractured jaw. Danny McGrain had suffered a fractured skull at the same venue just the previous year. Second half strikes from Davie Hay and Bobby Lennox, the latter from the spot, secured a 2-0 win for Celtic. 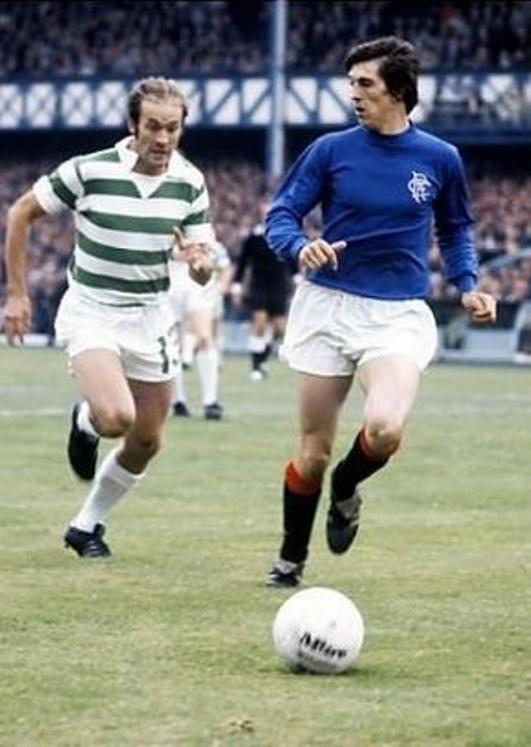 Saturday, 18 August 1973 saw the first meeting of Celtic and Rangers since the cup final three months earlier. The Ibrox club were going for an unprecedented third consecutive victory over a Jock Stein Celtic team as they welcomed them to Govan, and they would create the better chances in a goalless first half. The match changed with the introduction of Harry Hood and Tom Callaghan for Kenny Dalglish and Brian McLaughlin either side of the hour mark, Harry’s number 13 shorts proving unlucky for the hosts, as his interventions won the game. 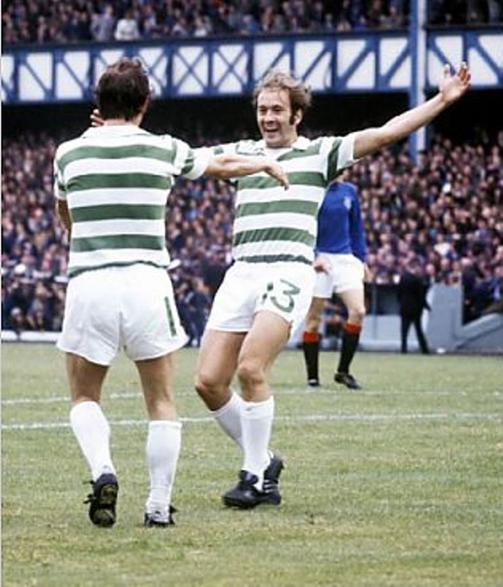 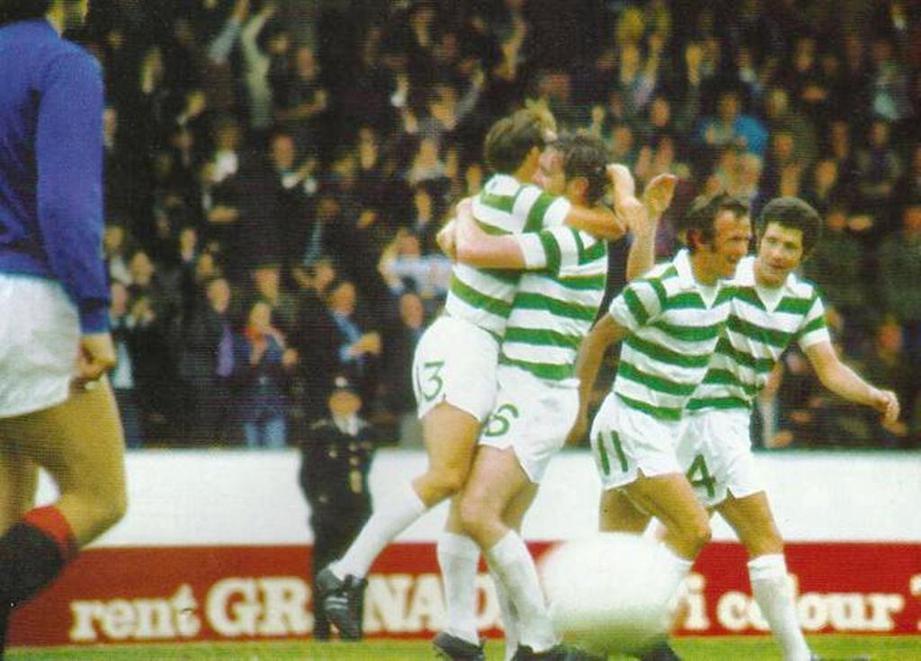 With eight minutes remaining, Hood turned Willie Mathieson and Dave Smith inside out before setting Bobby Lennox up for his customary goal against Rangers, then, within five minutes, it was 2-0, Lennox this time returning the favour to leave Harry with a clear shot at goal for his first strike of the season after a lightning counter-attack. A last-minute own goal from Billy McNeill then ended the scoring at 2-1 as Celts took the initiative in the group, albeit unlike previous seasons, the two top clubs from each section would qualify in a dreadfully unexciting format. This would be significant for both Harry and Celtic later that year. 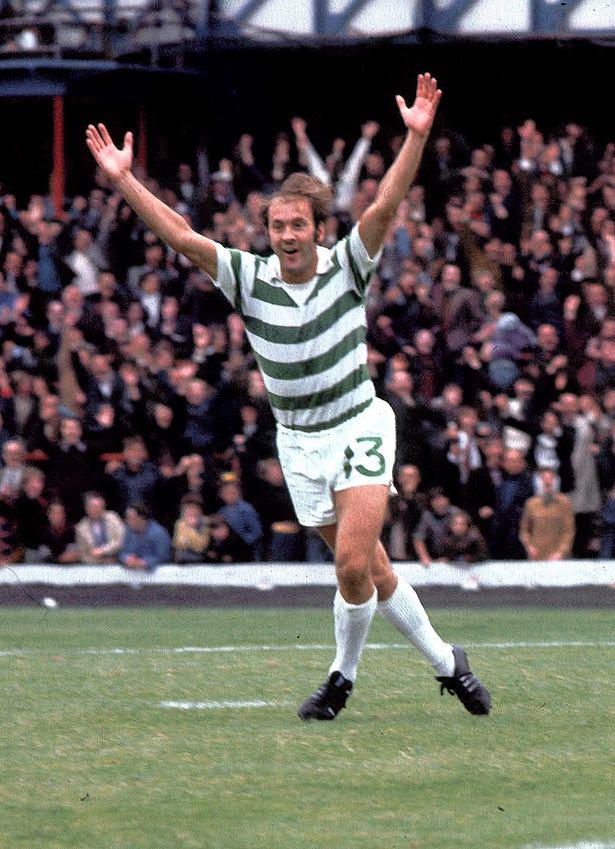 Harry would revert to the traditional number 9 shorts in midweek as an early Bobby Lennox double in the home tie with Falkirk secured qualification with two matches remaining. The return match with Rangers, though, on Saturday, 25 August 1973 would be a different matter. Hood would return to the bench as Kenny Dalglish regained his starting slot, Celts totally dominating the first half but heading down the Parkhead tunnel with only a Lennox goal to show for that, the Ayrshire Lion having another goal disallowed in controversial circumstances, whilst Dalglish struck the post.

With a Celtic victory looking inevitable, the game would turn on its head in a five-minute spell early in the second half, a volley from Alex MacDonald and a dubious Derek Parlane strike, which brought Jock Stein to the touchline to calm his players down, giving the visitors an unlikely lead. Moments later, Jimmy Johnstone reacted to MacDonald’s crude challenge, the winger immediately dismissed by referee J R P Gordon as Celts were left to play the remaining 30 minutes with 10 men. Stein would introduce Harry Hood for young Brian McLaughlin in a final attempt to save the match, however, a late solo effort from Alfie Conn would seal the visitors first win at Celtic Park since September 1968. 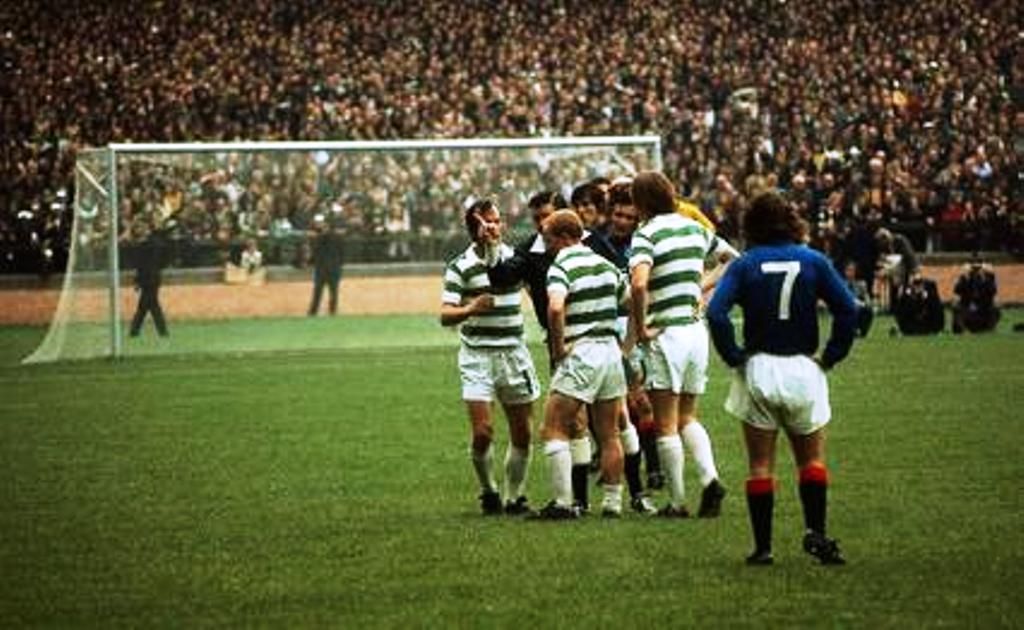 The section was rounded off with a 3-1 victory over Arbroath at Gayfield on Wednesday, 29 August 1973, young Highlander Roddie MacDonald making his Celtic debut as goals from Kenny Dalglish, Bobby Lennox and Paul Wilson secured the points. As one new Celt joined the ranks, those present would be witnessing another stage in the break-up of the Lisbon Lions. We would not know it that day, however, this would turn out to be the last appearance in his beloved Hoops for the incomparable Bobby Murdoch, put forward by many observers as the finest player in Celtic’s greatest-ever team. Praise really does not come any higher than that.

Steve Murray had been the preferred right-half since arriving from Aberdeen in May, and that would continue. Bobby had played as The Eight was secured at Easter Road in April then in the Scottish Cup final the following Saturday, and earlier in the season, he had scored Celtic’s 6,000th League goal against Partick Thistle at Parkhead. That would now prove to be his 110th and final strike for the club. After 507 appearances for his Bhoyhood team, stretching back 11 years to his debut against Hearts in August 1962, two days before he turned 18, the much-revered Lisbon Lion would sadly find himself surplus to requirements at Celtic Park. 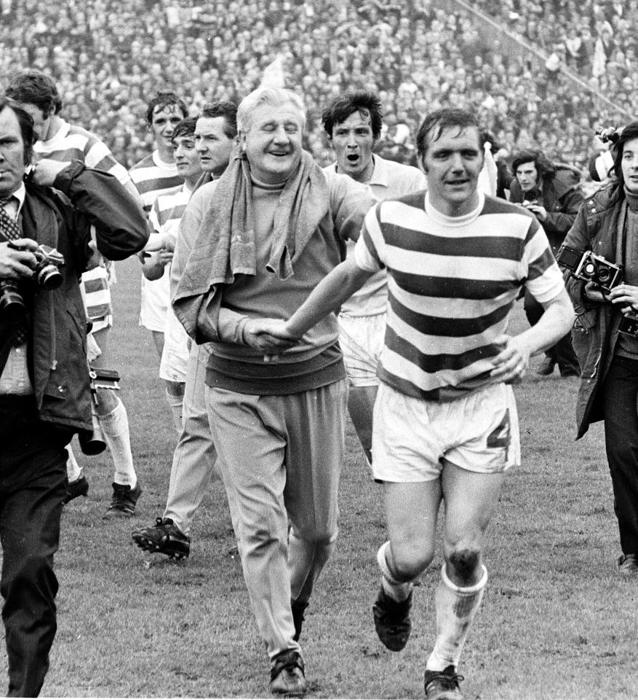 The campaign to win an unprecedented nine League titles in a row kicked off in Dunfermline three days later, the first day of September 1973, Jock Stein selecting the following team against the newly-promoted Pars.

The main talking point was the inclusion of dynamic midfielder Davie Hay, who had just been placed on the transfer list at his own request, the late Tommy Docherty amongst his alleged list of suitors, eight short months after he had lured Lou Macari to Manchester United.

I’m not sure why we weren’t in Fife that day, a venue I had yet to attend despite ticking off most of the others in the top Division, however, I do clearly recall watching the highlights that night on our new colour television. Harry Hood opened the scoring for Celts after 20 minutes, the game heading towards that narrow Hoops victory before an unexpected goalfest in the final 10 minutes. Alex Kinninmonth briefly brought the hosts level, only for substitute Paul Wilson, barely 60 seconds after replacing Brian McLaughlin, to give Celts the lead again with his first kick of the ball, getting on the end of Hood’s cross to beat John Arrol.

In the final moments, there was further drama. Under pressure from Steve Murray, future Dunfermline Athletic manager Jim Leishman conceded an own goal to make it 3-1, before Jackie Sinclair beat Ally Hunter to pull another one back for the hosts with literally the last kick of the ball. 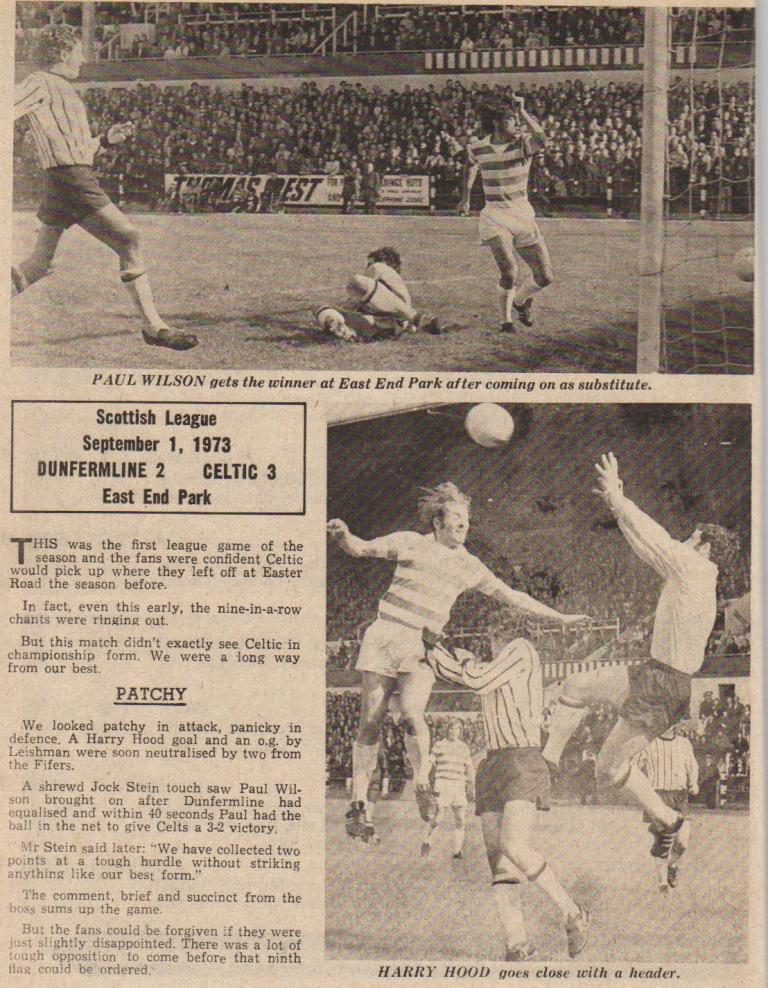 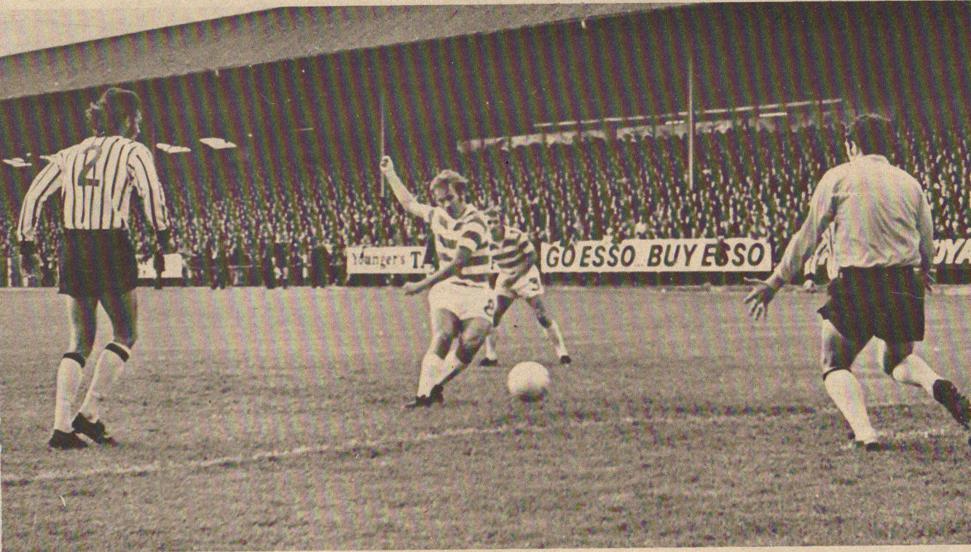 The following Saturday is another I remember well, albeit for the saddest of reasons. Clyde were the visitors to Celtic Park as the champions unfurled their eighth successive League flag, the Jungle flagpoles all displaying those distinctive white-and-green flags – a quite wonderful sight to behold – and all of the players wearing the number eight on their shorts to mark the occasion. 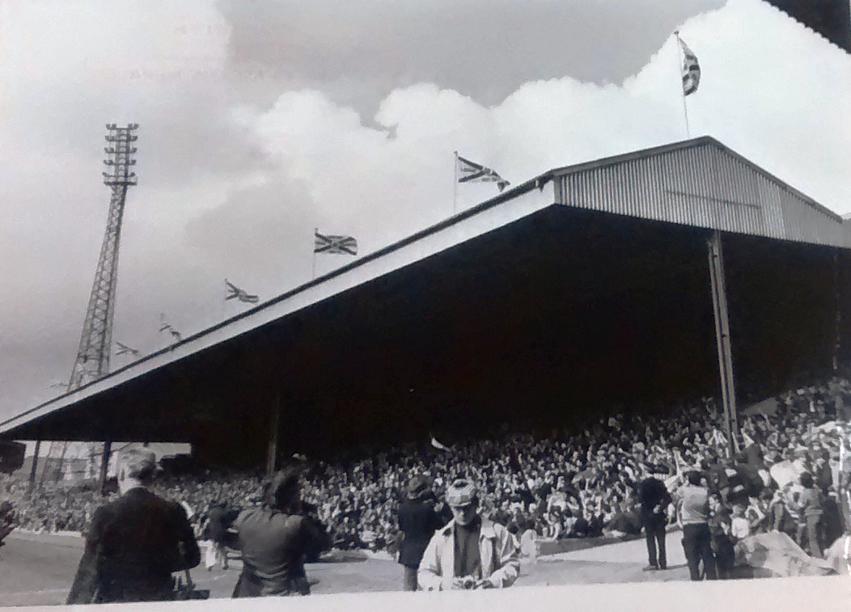 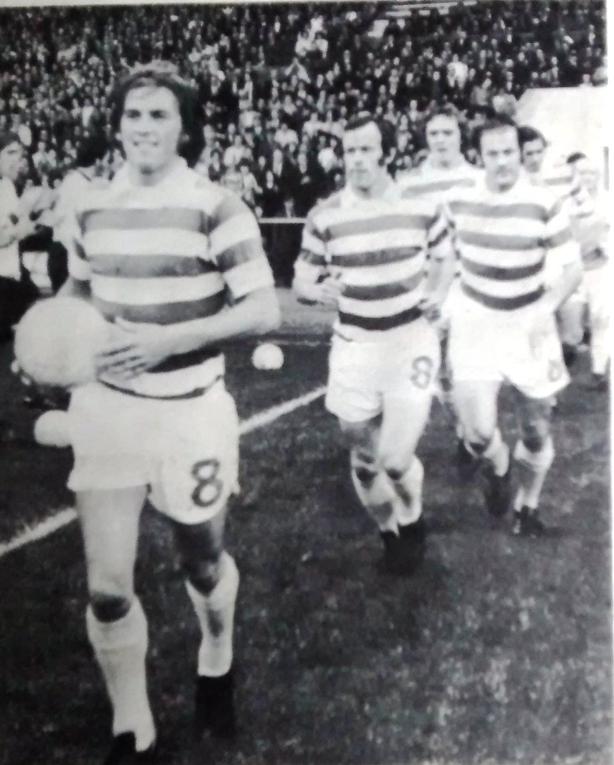 Jock Stein went again with the team who had started at Dunfermline, the only change being Jimmy Johnstone for Tom Callaghan on the bench beside Paul Wilson. Eight was indeed the magic number, as by that time Celts were already two goals ahead through a Bobby Lennox penalty and a superb Kenny Dalglish header. Tragically, the party atmosphere was crushed along with the ligaments in poor Brian McLaughlin’s knee, as a quite disgraceful challenge from Clyde defender Willie McVie ended his afternoon and effectively his career on the half hour.

Jimmy Johnstone entered the fray in time to see his old pal Lennox complete a hat-trick, whilst Danny McGrain would score the first of his impressive (Sorry, Danny!) catalogue of goals on the day he lined up against his namesake and cousin.

Jinky would replace Brian McLaughlin in the only change to the Celtic team for the midweek trip to Motherwell in the first leg of the League Cup second round. He would set up Harry Hood for the opening goal with a beautiful back-heeled pass midway through the first half, Steve Murray opening his Celtic account with a second just before the interval. John Goldthorpe would be involved in the main talking points after the break, the Motherwell striker fortunate to remain on the pitch after a late challenge on Hoops keeper Ally Hunter within seconds of the restart, the irony not lost on those present as he then kept the Steelmen in the tie with a goal a few minutes later. Still, it would be advantage Celtic for the second leg. 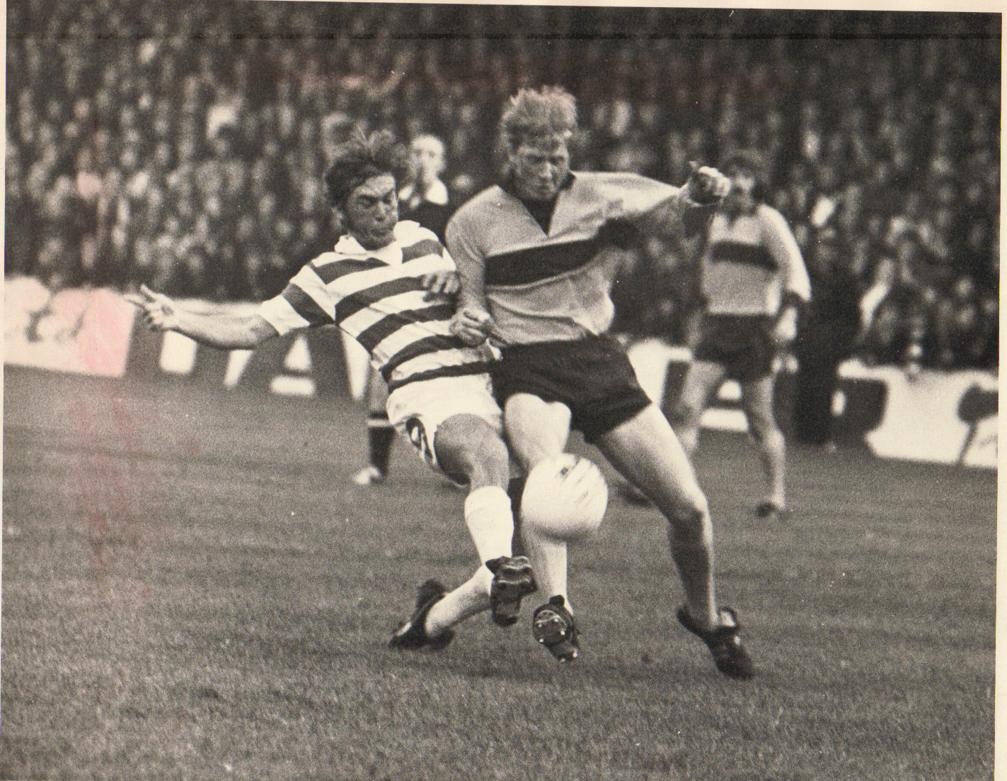 Bobby Lennox had limped off Fir Park in the first half and he would miss out as Celtic made a second visit of the season to Ibrox on Saturday, 15 September 1973, this time on League duty. Paul Wilson would replace the Celtic talisman in the only change to the starting line-up, with Pat McCluskey coming in from the cold to take a seat on the bench. Jimmy Johnstone had been cast as the villain in some quarters following his ordering off in the previous clash of the clubs three weeks earlier, however, once again he would prove the matchwinner, his header from Davie Hay’s cross with 20 minutes remaining being the only goal of the game. Incredibly, it was the fifth goal the little winger had scored at Ibrox, the third with his head. 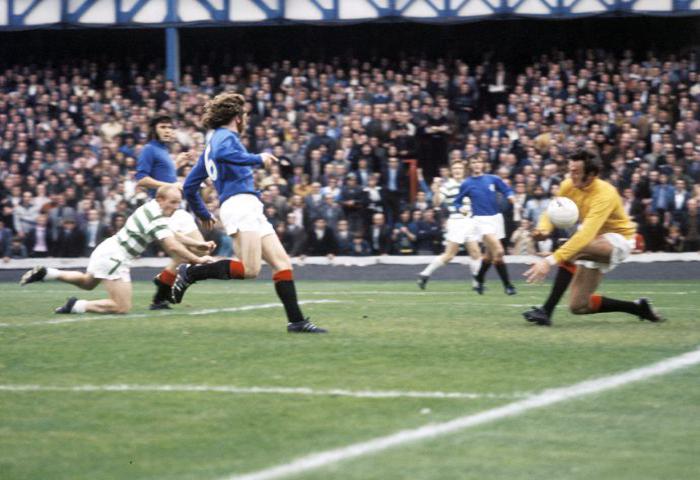 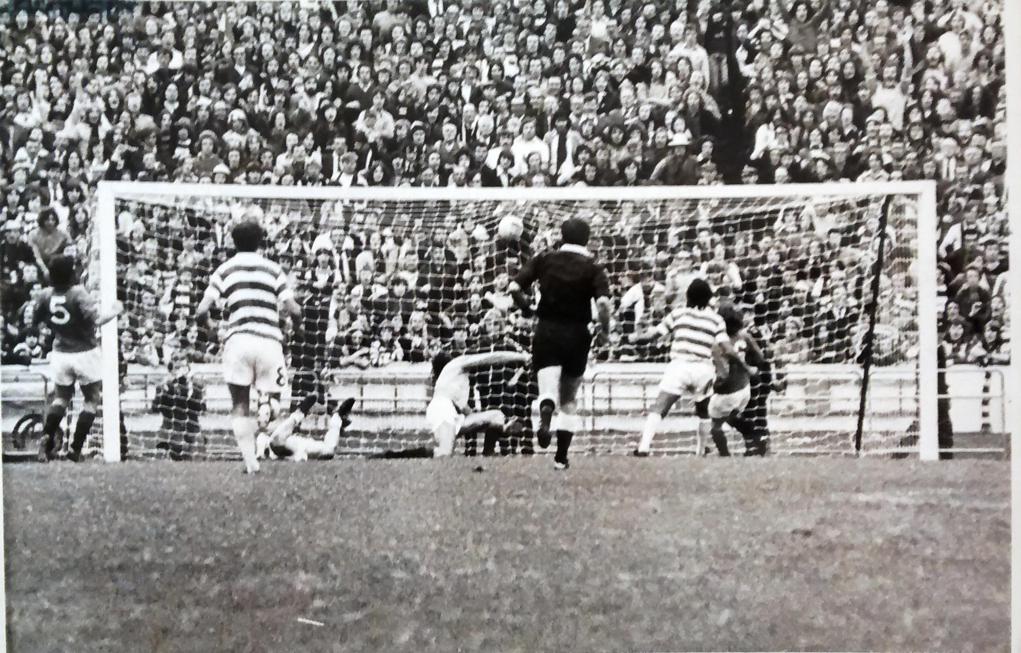 On a day when regular forwards Brian McLaughlin, Bobby Lennox and fractured jaw victim Dixie Deans were sitting in the stand, forcing a clearly unfit Kenny Dalglish to play his part on the pitch, it would no doubt be a happy Jock Stein who contemplated that 1-0 victory later that evening.