You are at:Home»Latest»“Oh Harry, Harry…Oh Harry Hood”: Celts struck by the curse of the full-backs

The big games kept on coming for Celtic, Jock Stein’s men following up their superb victory in Budapest with a trip to face nearest title challengers Aberdeen at Pittodrie three days later, Saturday, 11 March 1972. The Hoops boss went with the starting line-up which had played so well against Ujpest Dosza in midweek.

Harry Hood once again excelled in his midfield role, as did George Connelly in central defence, as Celts went for the victory which would effectively seal a seventh consecutive League title. It was Connelly who would be instrumental in the Bhoys taking the lead, just 17 minutes from time, a clever overlap allowing him to take Bobby Murdoch’s quick free-kick in his stride before passing across the goal for Bobby Lennox to stride in and beat Gordon Marshall, until recently his teammate at Parkhead. 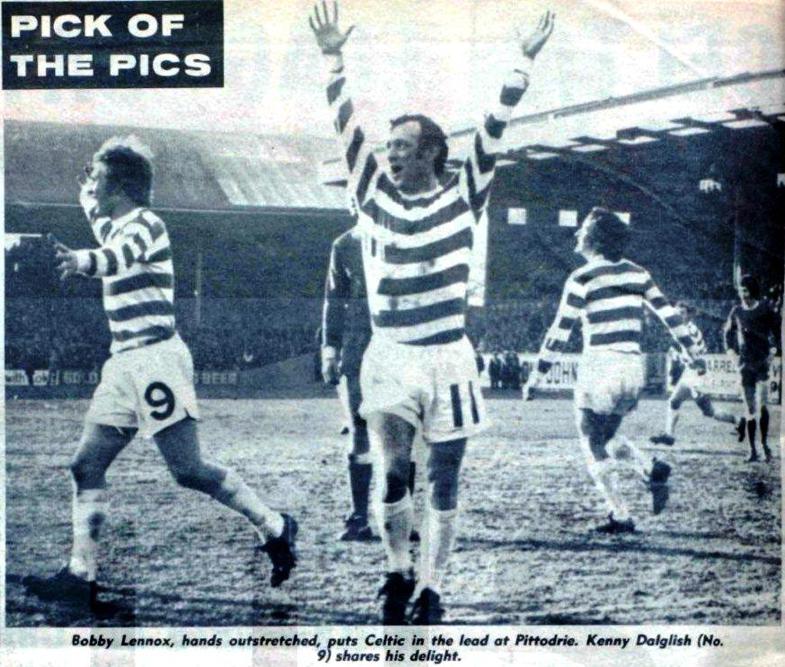 It was almost 2-0 five minutes later, Hood showing wonderful control to set up Kenny Dalglish, only for Dons centre-half Willie Young to pluck the ball from the foot of the Scotland striker in the nick of time. Celts would regret that missed opportunity within moments, as Joe Harper flashed a shot past Evan Williams to equalise. There would be no further scoring as a League match between the country’s top two sides ended 1-1 for the third successive time, a result which undoubtedly suited Celtic much more than the hosts on this occasion. 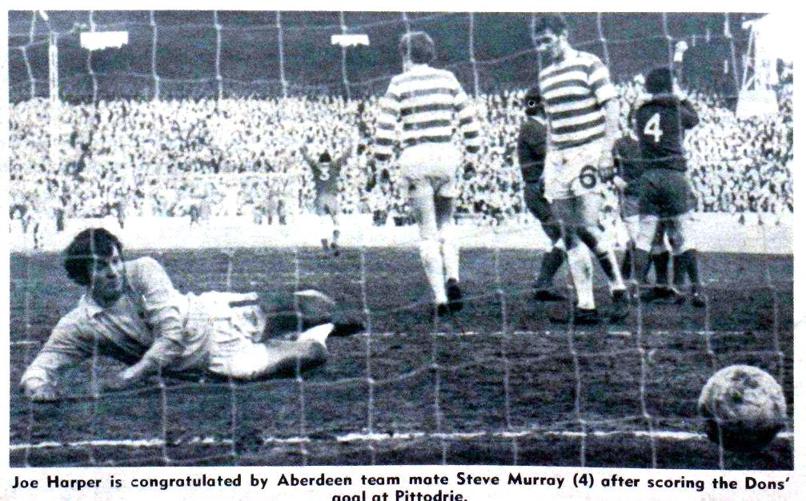 The following Saturday was Scottish Cup quarter-final day, with Hearts the visitors to Celtic Park, a crowd approaching 48,000 rolling up to see if the Hoops could take another giant step towards a possible Treble. Fit-again Dixie Deans returned at the expense of the fatigued Kenny Dalglish, the youngster dropping to the bench with Tommy Callaghan coming in for George Connelly, the defender having sustained an injury on international duty in midweek. Hearts featured future Celt Andy Lynch on the left-wing, ahead of 21-year-old full-back Jim Jeffries. 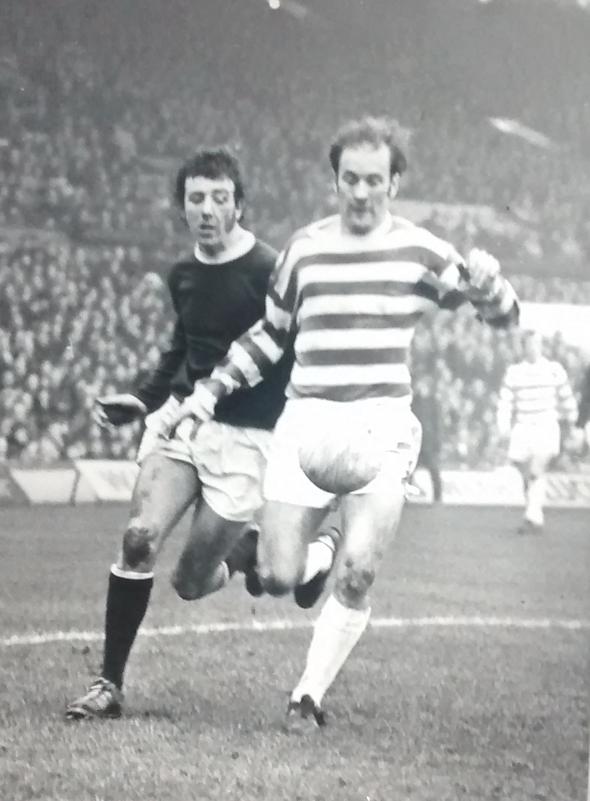 Things looked good at the interval, the hosts ahead through a Deans strike on the half-hour, however, as the match progressed Celtic seemed to be pushed further and further back, perhaps the efforts of the previous fortnight taking their toll. I recall a sense of dread and disappointment as the equaliser which had been coming finally arrived from Derek Renton in the last minute up at the far end of the ground. Now we would have to win at Tynecastle, another difficult away match.

At least Stein’s men were still in the running, Aberdeen’s 2-0 defeat at the hands of their former manager Eddie Turnbull at Easter Road meant that their hopes of a domestic double had effectively been killed off in just eight days. Kilmarnock plus either Motherwell or Rangers would complete the last four line-up in the Scottish Cup.

Four days later, Wednesday, 22 March 1972, a special gift was discovered in my 11th birthday card, a stand ticket for that night’s European Cup quarter-final second-leg match against the Hungarian champions, Ujpest Dosza. Those of you of a certain vintage will remember the old stand briefs, a huge yellow paper ticket, which unfolded like an Evening Citizen. There was no better sight to behold as a kid. This would be a real treat. My first big European match.

Somehow, I managed to get through the school day and took my seat to witness the magical spectacle of a packed Celtic Park under the floodlights. I will never, ever forget that moment.

Back into the side came George Connelly and Kenny Dalglish, with Tommy Callaghan and Dixie Deans moving onto the bench beside Jimmy Johnstone, the talismanic winger having been on the sidelines since the defeat of Hibernian on the last Saturday in January. This would be vital.

The significance of that fantastic result in Budapest was emphasised for the 75,000 supporters as the wonderful Ferenc Bene gave the Celtic defence a torrid time, the vastly experienced Hungarian international striker setting up a tie-equalising goal for his partner Antal Dunai in the opening five minutes. My young heart sank into the Upper Stand seat, as a purple tide threatened to sweep the Hoops out of the tournament.

But then there was Jinky, hero of so many European nights in the east end arena. Parkhead erupted as he came off the bench to replace the injured Jim Brogan on the hour mark, as yet again Jock flexed his tactical muscles, moving Davie Hay to full-back to accommodate the little maestro. Within a few minutes, Lou Macari had scored against Ujpest once again, lobbing the goalkeeper gloriously at the packed Celtic End to kick off wild celebrations which would continue until full-time.

Celts would march through to a fifth European semi-final, four of them under Jock, to face old foes Inter Milan in a repeat of the 1967 finale. We would happily settle for a repeat of that outcome.

Three days later it was back to the business of setting a new landmark, a seventh successive Scottish title, a visit to Brockville the latest challenge. The hosts included their recent signing from Celtic David Cattenach in defence, whilst Jock Stein rested a number of top stars ahead of the vital Scottish Cup quarter-final replay with Hearts in midweek.

Bobby Murdoch, Jimmy Johnstone, Harry Hood and Bobby Lennox all joined the injured Jim Brogan in sitting this one out, whilst European Cup hero Lou Macari dropped to the bench. Macari would be introduced after the interval, albeit in the most distressing of circumstances, Danny McGrain sustaining a fractured skull in a collision with Falkirk striker Doug Somner just six minutes in, yet bravely playing on until half-time. They broke the mould when they made Daniel Fergus McGrain. 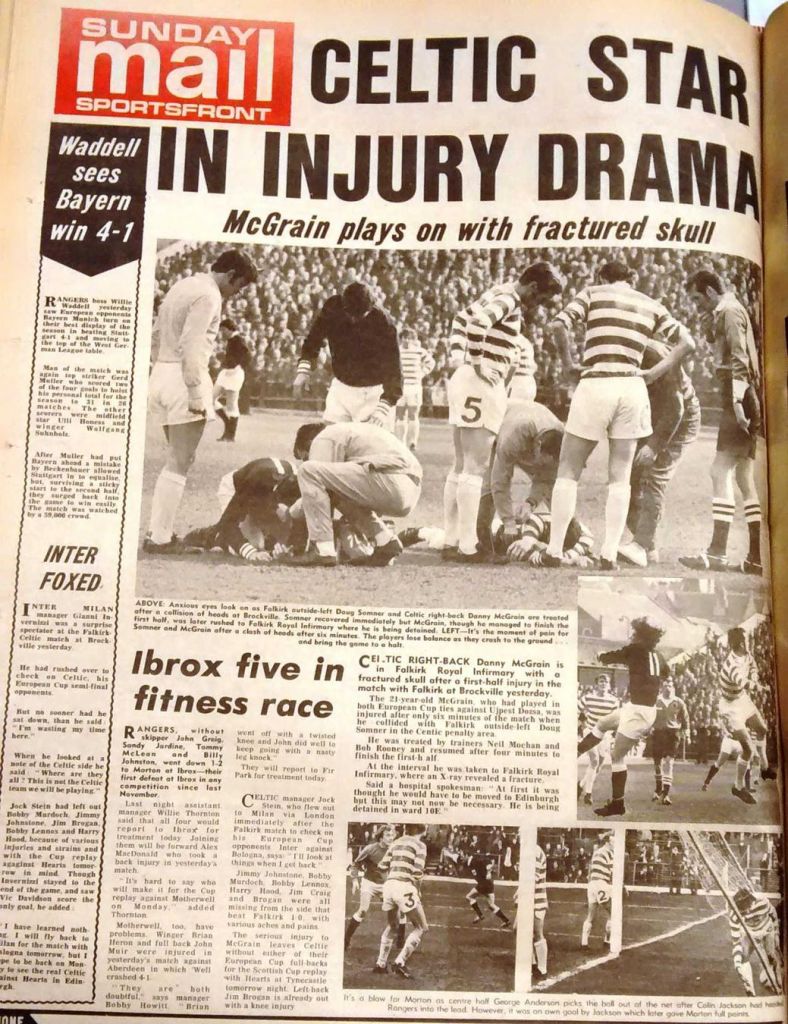 Somner and partner Alex Ferguson would enjoy then miss the best of the chances in this game before Celts hit them with a sucker punch in the final five minutes, with a goal made in Quality Street. The move was started by George Connelly, with Macari then Paul Wilson involved before Vic Davidson secured another two crucial points with a low shot past Ally Donaldson.

Two nights later, Monday, 27 March 1972, the Celtic army travelled in huge numbers through to Edinburgh, swelling the Tynecastle gate to over 40,000 for the replayed Scottish Cup-tie. It was another ‘backs to the wall’ performance from Stein’s men, the only goal of the tie coming 10 minutes before the break as Lou Macari, the smallest man on the pitch, somehow got on the end of Harry Hood’s corner to head home. 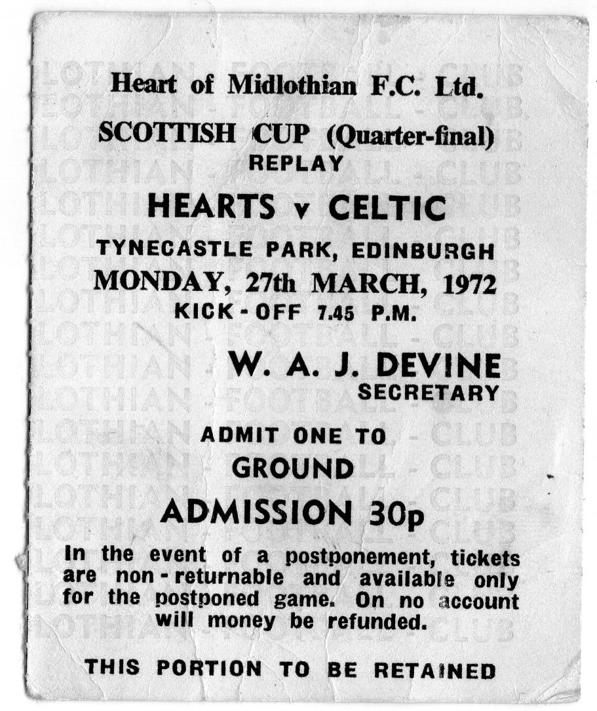 Harry would spend most of the second half as a virtual passenger on the wing after suffering a heavy challenge, Celts having already used their substitute Jimmy Quinn as the curse of the full-backs struck again, this time Davie Hay the man hobbling off, joining Jim Brogan and Danny McGrain on the treatment table. All three defenders plus the experienced Hood were unlikely to recover in time for the trip to Milan, leaving Jock Stein with a massive problem to solve.

The match would end amidst ugly scenes, play stopped for several minutes as trouble erupted in the covered enclosure opposite the stand. Police would eventually restore order and clear the field, allowing the closing stages of the game to be completed, however, the spectre of segregation inside Scottish football grounds had taken another massive step forward.

The first day of April saw the return League fixture with Partick Thistle at Celtic Park, Jim Craig and Jimmy Quinn the latest to be named in the dreaded full-back slots for the final match before the visit to the San Siro. The match as a contest was finished within 12 minutes, by which time Vic Davidson had scored his second of the afternoon, 11 minutes and 44 seconds after his first! Jimmy Johnstone would add another headed goal to his collection when he beat Alan Rough before the half-hour, the Jags managing one in response through Frank Coulston as the interval beckoned.

That would be it in terms of scoring, as Celtic ran out comfortable 3-1 winners on a miserable afternoon for the 30,000 spectators, however, fate would intervene yet again, as young Jimmy Quinn, the emergency full-back, was hurt early in the game and would now join the list of probable casualties ahead of the midweek Italian Job.

Previous ArticleScottish Cup Final: Go with Momentum, Tomorrow’s World For Celtic
Next Article “Someone rang the club and said that I had five grand on Rangers to beat us,” Celtic Star