You are at:Home»Latest»“Oh Harry, Harry…Oh Harry Hood”: Harry joins a select club as early revenge is taken on Thistle

Jock Stein reacted to the League Cup final defeat by Partick Thistle by going into the market for a new goalkeeper and striker. In came Denis Connaghan from St Mirren, having starred in the recent semi-final against the Hoops at Hampden, and John ‘Dixie’ Deans from Motherwell, despite the fact he was serving a six-week suspension for his most recent ordering off. 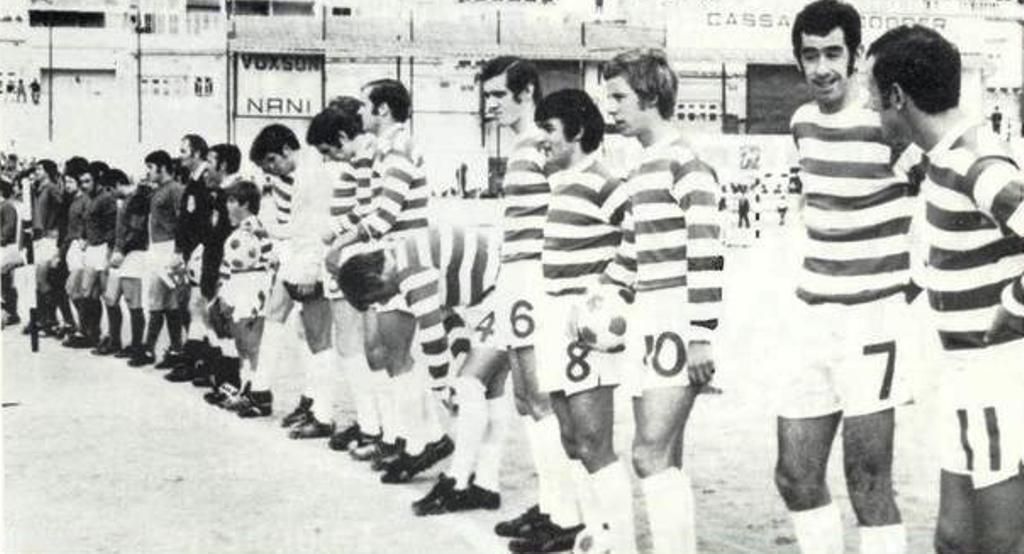 Before Deans could pull on that jersey, there was European Cup business to conclude, Harry Hood becoming the first Celt to score on the George Cross island of Malta when he equalised just before the interval in the return leg with Sliema Wanderers, on a surface which must have brought back memories of childhood games on the red ash of the old Broomfield Pitches in Balornock. 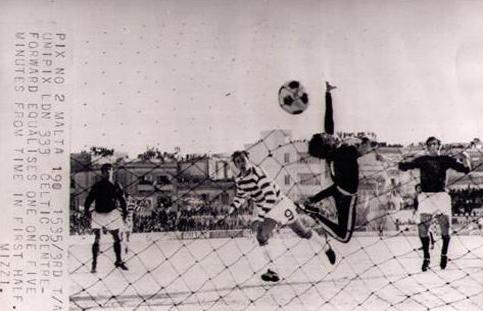 Hood then set up Bobby Lennox for the second-half winner on an afternoon which saw former Juniors star Steve Hancock make his only appearance for Celtic, the highly-rated centre-forward replacing Vic Davidson as the Bhoys cruised through on a 7-1 aggregate.

The victory in Malta would also be the final match for another Lisbon hero, Tommy Gemmell. He would be dropped as Celtic and Aberdeen once again met in a top-of-the-table clash, this time at Parkhead on Saturday, 6 November 1971. Each side had so far only dropped points in their matches with St Johnstone, both co-incidentally played on successive Saturdays the previous month, the Dons draw at Muirton Park giving them the edge over Celtic, who had lost to the Perth outfit at home the week before. Aberdeen had also hammered new League Cup holders Partick Thistle 7-2 at Pittodrie, ahead of their trip to Glasgow, so they would travel full of confidence. Their visit attracted 64,000 supporters to Celtic Park, 1,000 more than had watched their victory on the same ground 11 months earlier. Jock Stein handed a home debut to keeper Denis Connaghan, as he went with the following team.

This is another one of those ‘rite of passage’ matches I remember so well from my childhood. I had been deemed too young to go to that corresponding match, when Joe Harper’s header had continued Aberdeen’s excellent record against Celtic at that time, however, this would now be the largest attendance I had ever witnessed at Celtic Park. 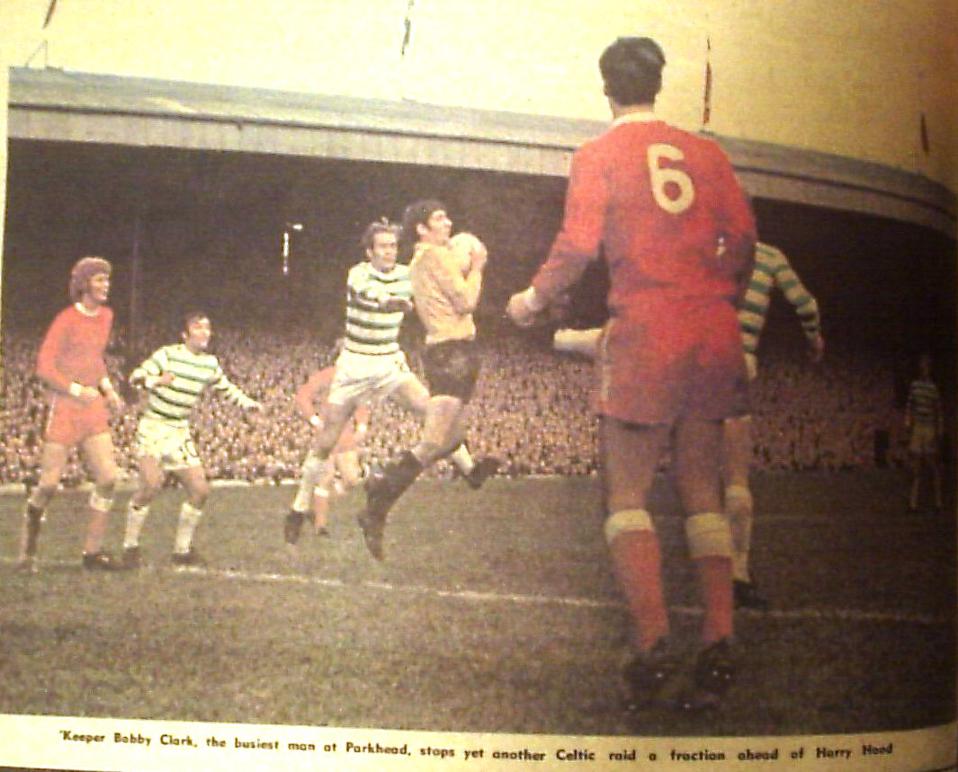 The Bhoys were shooting into the ‘wrong end’ in the first half and despite dominating the play, it would take until the hour mark before Harry Hood squeezed a low shot past Bobby Clark at the far end to give the Hoops the lead, and set us up for going top of the table. With 13 minutes remaining, however, that script was re-written, as Billy McNeill headed Harper’s cross past Connaghan to nestle in those green nets before hiding his face in his hands, an image I can still recall so clearly almost 50 years later. 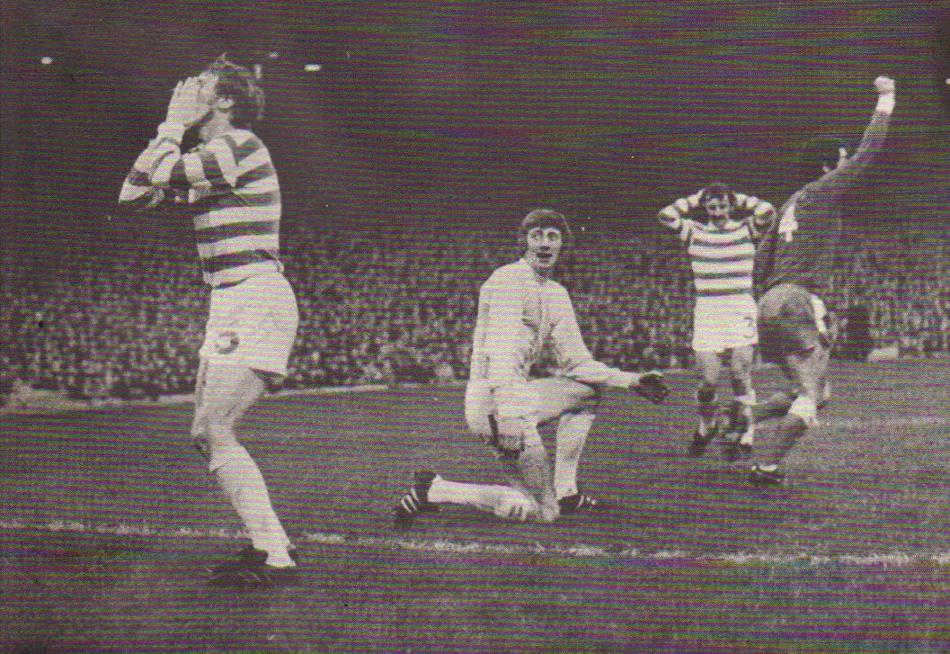 Aberdeen would hold out for the point which kept them clear at the top, thus extending their unbeaten record against Celtic to six games, stretching back to October 1969.

Three Celts did enjoy a victory at Pittodrie in midweek, albeit they were wearing the navy blue of Scotland as an early goal from John O’Hare – Harry Hood’s old striking partner at Sunderland – was enough to beat Belgium in a qualifier for the European Championship finals to be held in the same country the following summer. Both David Hay and Jimmy Johnstone started the match, whilst it was a landmark evening for Kenny Dalglish, his rapid rise to fame continuing as Tommy Docherty awarded him the first of what would be a record number of international caps, the youngster replacing Hibernian’s Alex Cropley early in the second half.

All three men were in an unchanged Celtic team which trailed at half-time to an Alan Gordon goal at Tannadice, three days later, before Jock Stein’s revamped attacking formation for the second half changed the match completely. Harry Hood would be pulled down for a penalty within three minutes of the restart, confidently converting his spot kick before firing Celts in front 60 seconds later. Further goals from Lou Macari, Dalglish and substitute Bobby Lennox, with his first touch, sealed an eventually emphatic 5-1 win over Dundee United. 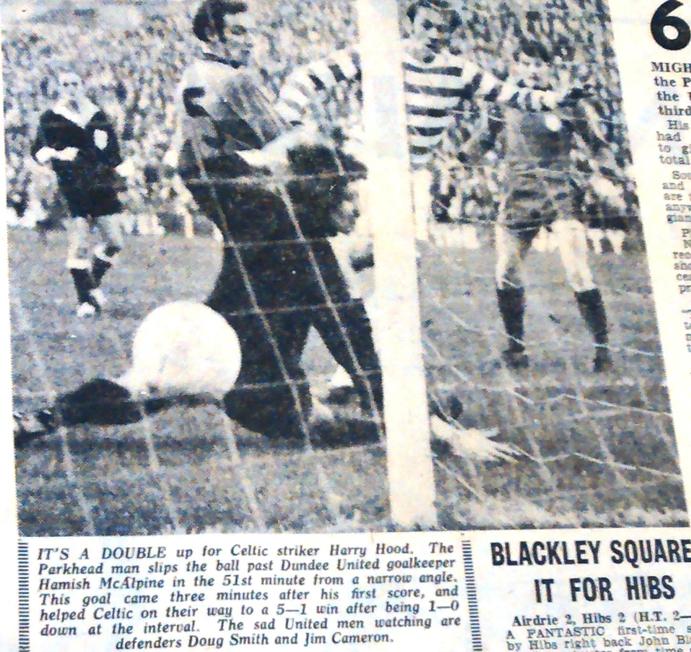 The following Saturday, 27 November 1971, was another significant one for the title race, and for a couple of the Celts who lined up at Firhill with revenge very much on their minds. The re-run of the previous month’s League Cup final was a 33,000 sell-out, meaning I was confined to barracks. It’s a tough gig being a 10-year-old Celtic supporter sometimes. Dixie Deans was finally free of suspension and made his Hoops debut, whilst young striker Jimmy Quinn retained the left-back slot he had filled so well during the previous week’s home win over Falkirk. That would probably send out the clearest of signals to a fit Tommy Gemmell.

Within 15 minutes, Harry Hood had successfully achieved that most unique feat – well, unique unless you’re Charles Patrick Tully – by scoring directly from a corner kick to give Celtic the lead. And by the half-hour it was 3-0, Jimmy Johnstone and Kenny Dalglish piling on the agony. Jimmy Bone would grab a consolation for the Jags before the interval, however, an own goal from Hugh Strachan and a debut header from Deans in the final 10 minutes would serve the revenge dish up cold at 5-1. Knowing me, I probably claimed that as an aggregate victory. 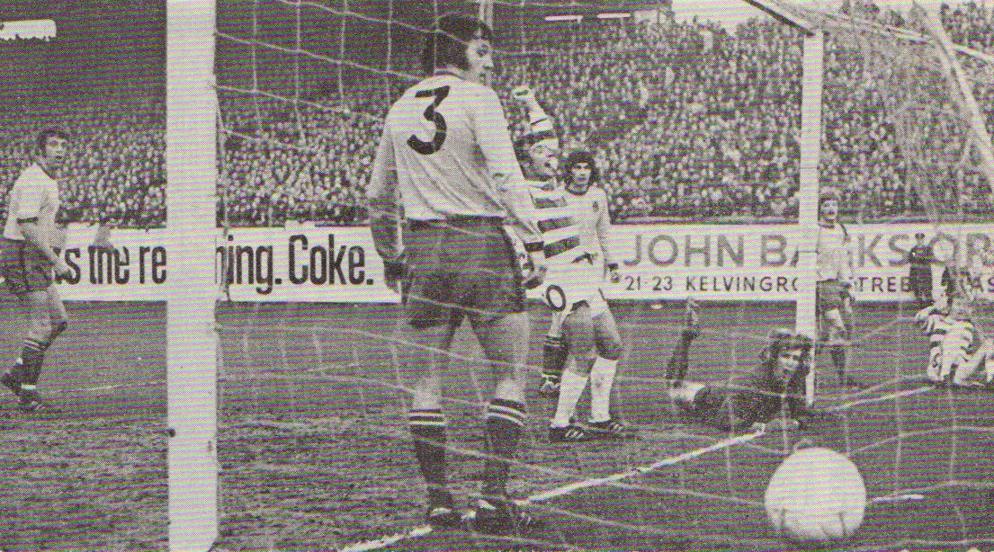 The good news kept on coming at full-time, as word filtered through that third placed Hearts had beaten leaders Aberdeen 3-2 at Pittodrie, the loss of their unbeaten record also costing the Dons top spot, as the five-star Celts leap-frogged them by a point.

Jock Stein’s December began in Berlin, on a night which would later have great significance to his Celtic side’s European aspirations. He was attending the replayed first leg of the match between Borussia Munchengladbach and Inter Milan. The initial game, played as Celts were hitting Sliema Wanderers for five goals, had finished in an incredible 7-1 victory to the West Germans, the Italians then successfully appealing to UEFA for the result to be annulled, claiming that their goalscorer, Roberta Boninsegna, had been struck by a can of Coca-Cola thrown from the crowd in Munchengladbach. A 4-2 win for Inter in the San Siro two weeks later had, in effect, became the first leg. Stein and 85,000 supporters would then witness a goalless draw in the Olympiastadion which saw Borussia eliminated. The sour taste felt by most football supporters on hearing this result would be particularly bitter in Glasgow’s east end in the spring.

In the meantime, the new League leaders in Scotland would keep winning. Kilmarnock were on the receiving end of a second consecutive 5-1 Hoops win on Saturday, 4 December 1971, doubles from Jimmy Johnstone and Kenny Dalglish plus a first home goal for Dixie Deans, and the new striker scored both goals the following Saturday in the 2-1 home win over East Fife.

A quirk of the fixture calendar then sent Dixie Deans back to Motherwell, as Celts faced the Steelmen at Fir Park on Saturday, 18 December 1971. He would show his old mates no mercy by opening the scoring within 10 minutes, thus continuing his goal-a-game start to his Celtic career. Kenny Dalglish added a double before Jackie McInally – Rambo’s dad – pulled one back for the hosts. With this season’s new Bhoys having done their bit for the cause in the first half, it was the turn of the old brigade after the break, Bobby Lennox and Jimmy Johnstone both on target as Celts won 5-1 for the third Saturday in four. 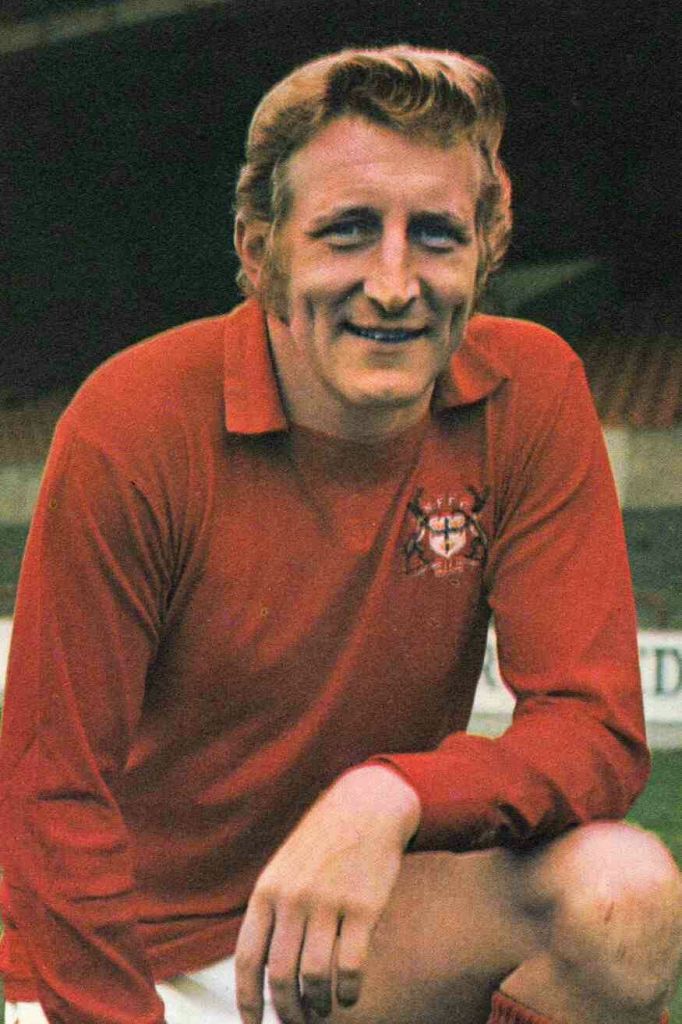 The day before that victory, another of the Lions had finally left the colony, Dixie Deans’ fee recouped immediately as out-of-favour Tommy Gemmell headed south to join Nottingham Forest. He would follow Bertie Auld, John Clark, Stevie Chalmers, Willie Wallace and John Hughes in leaving Parkhead in the last six months, a massive transition by any standards.

The final game of 1971 was also the last time Celts were in action on Christmas Day, my dad and I unusually heading for the east terracing, where we met up with my mum’s two Celtic-mad brothers for, I think, the only time that happened in all my years following the club. 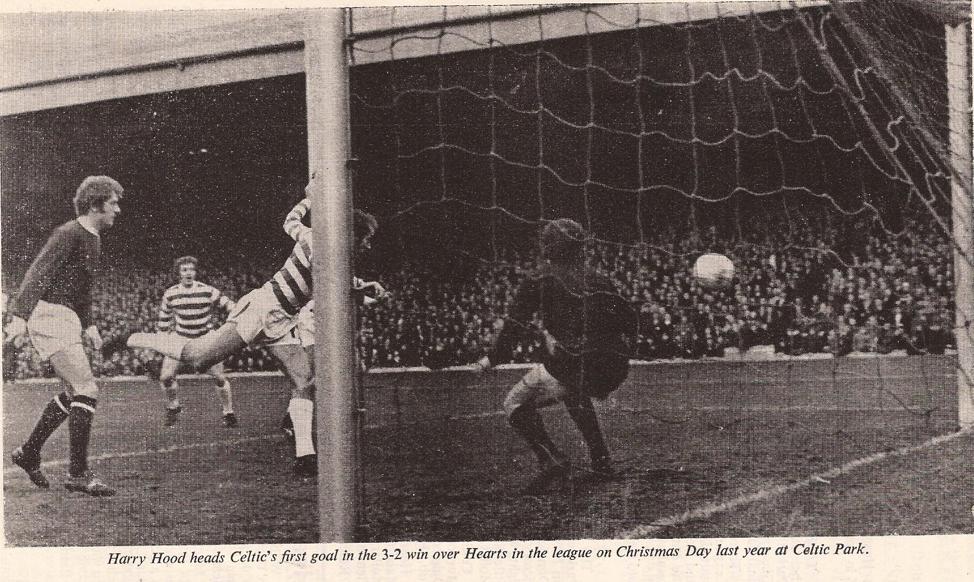 Hearts were the team with the unwanted gift of facing Stein’s men in such formidable form, 34,000 supporters somehow escaping from festive duties to pile into Parkhead. Harry Hood was the first to unwrap the Tynecastle defence, scoring the opening goal within 60 seconds to get the party started. A masterclass in wing-play from Jimmy Johnstone was rewarded with a second, 10 minutes before the interval, just after the Gorgie men had equalised somewhat against the run of play, then with 20 minutes remaining, Hood set up Dixie Deans for his by-now customary goal. Hearts defender Jim Brown would scramble a shot past Denis Connaghan to make the last 12 minutes or so more anxious than should have been the case, however, Celts would end the afternoon and the year at the top of the table, after a 3-2 Christmas cracker. 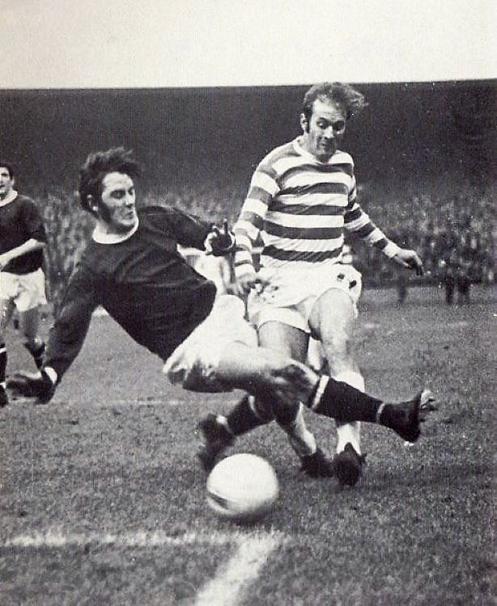 The battle for an unprecedented seven-in-a-row League Championships was very much on. 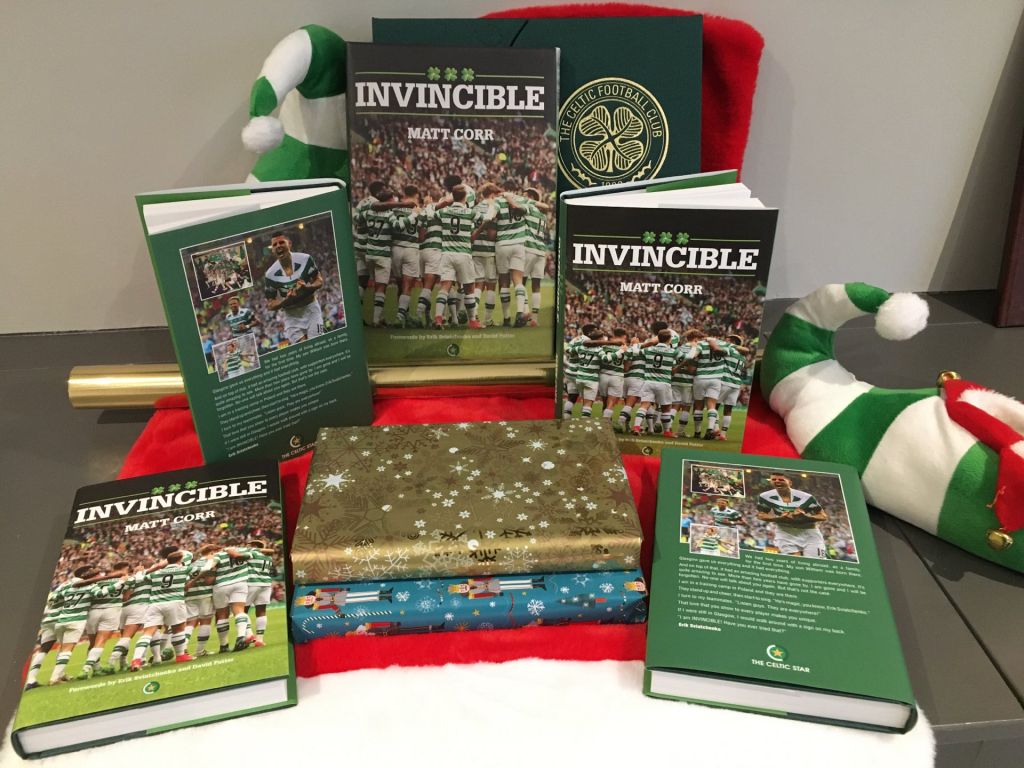 Order a signed with a personal deduction added for Christmas direct from the author. Just click on image…