You are at:Home»Latest»“Oh Harry, Harry…Oh Harry Hood”: No happy returns to Hungary for Celtic

October 1972 saw the inconsistent performances and mixed bag of results continue for Celtic. Dundee followed up their recent 2-0 League victory over the champions at Dens Park with another home win in the first leg of the League Cup quarter-final, this time a single goal from Gordon Wallace doing the damage. We would be using that phrase again in the near future.

Four days earlier, Saturday, 7 October 1972, Harry Hood had been given an infrequent starting slot as Airdrieonians left Parkhead with a point, following a frustrating 1-1 draw, but he was back on the bench the following Saturday as Celts made the short trip to Firhill. He would join the fray with the Bhoys 2-0 up and 25 minutes remaining, Jim Brogan finally succumbing to an injury sustained in the opening stages. Goals from Bobby Lennox and Kenny Dalglish would then add to earlier strikes from Davie Hay and Dixie Deans as Celts ran out 4-0 winners. 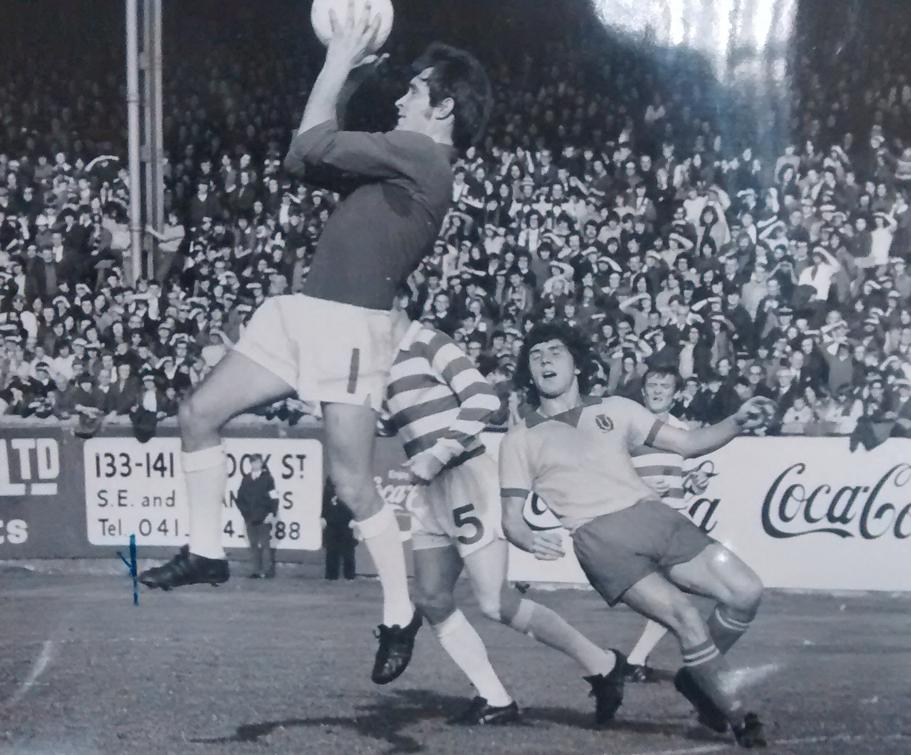 Harry would play a key role in Celtic’s next game, a home League fixture with East Fife, once again coming on as a substitute, this time for Bobby Murdoch with just half an hour played. Seconds before the interval, Hood fired home from close range as defiant Methil goalkeeper Dave Gorman was finally beaten. Late goals from Dixie Deans and Bobby Lennox then put a bit more gloss on the scoreline at 3-0. 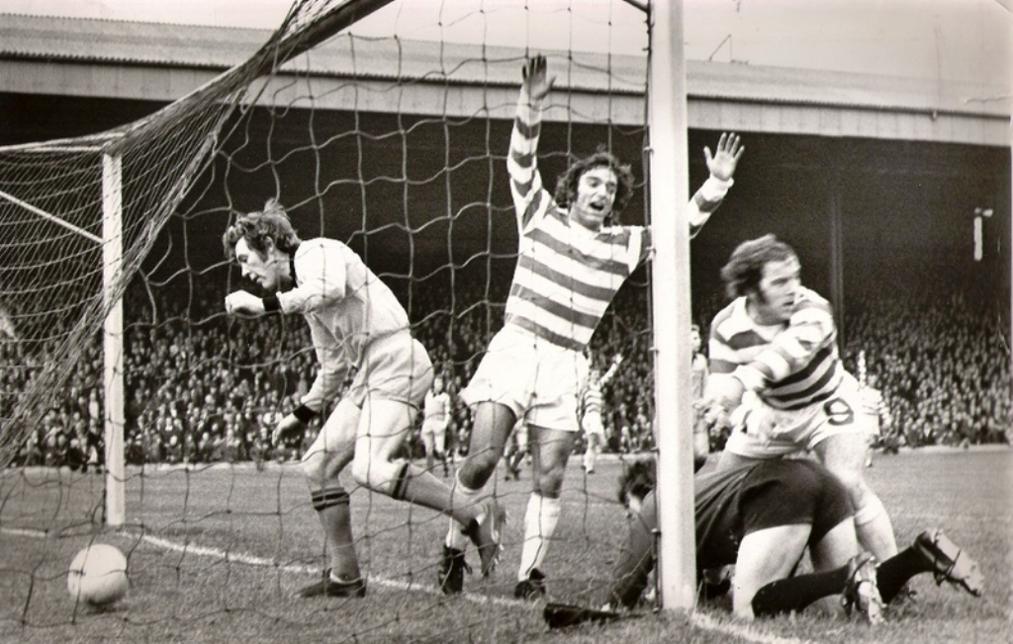 Midweek saw the return of the European Cup, Jock Stein asking for and receiving a tough tie, a re-match with Ujpest Dosza, just six months after the Bhoys had defeated the Hungarian champions to set up the ultimately heartbreaking semi-final with Inter Milan. This time the first leg would be at home and the outcome would be very different. In the absence of the injured Bobby Murdoch and Jim Brogan, the Celtic manager went with the following team on Wednesday, 25 October 1972, in front of 52,000 at Parkhead. 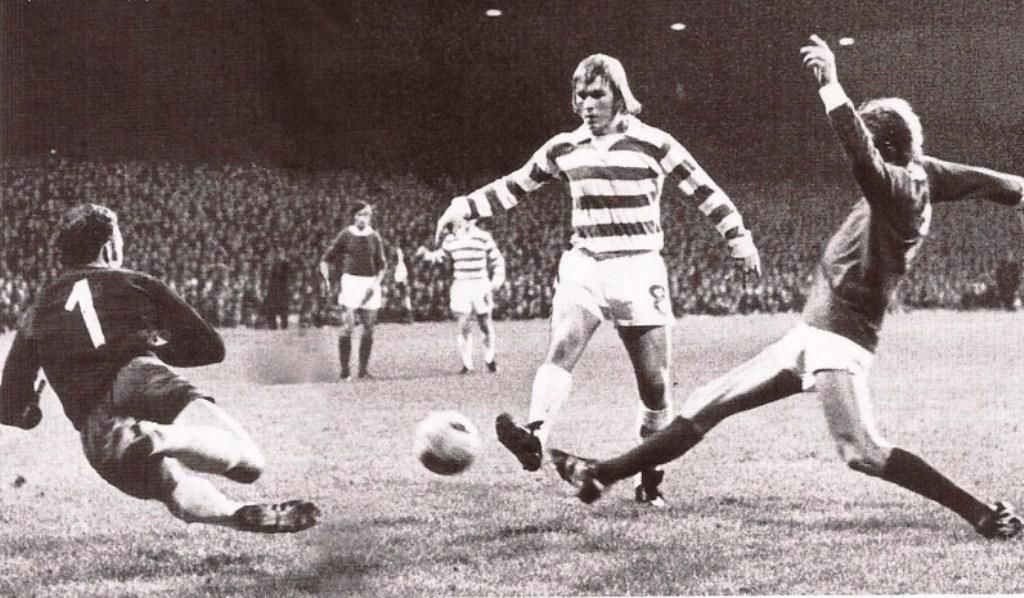 Ujpest veteran Ferenc Bene had been a thorn in Celtic’s side back in March, and he would be so again, striking to give the Hungarians the lead on 20 minutes. The closing stages of the first half saw Harry Hood inches away from equalising, before he became the first victim of Jock Stein’s tactical reshuffle, making way for Pat McCluskey at the interval as George Connelly was pushed into midfield.

Within five minutes of the restart, the Hoops boss would be vindicated, Connelly crossing for the immaculate Kenny Dalglish to sidefoot the ball home. With 15 minutes remaining and the game locked at 1-1, Stein made his second move, Jimmy Johnstone withdrawn and his great friend Bobby Lennox introduced, much to the displeasure of large sections of the crowd. His impact would be immediate, a far post cross picking out Dalglish to nod home for 2-1. Despite incessant pressure, there would be no further scoring, the tie now beautifully balanced ahead of the second leg.

There would be a Hungarian influence in Celtic’s next match, the trip north to face closest challengers Aberdeen at Pittodrie three days later. The Dons would field their new Magyar signing Zoltan Varga, christened ‘Salt’n’Vinegar’ by the home fans in those days when any player not from Scotland or Scandanavia was still very much a novelty. 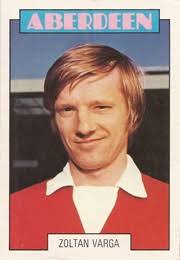 Varga had enjoyed an interesting career, to say the least. A gold medal winner with Hungary at the Tokyo Olympics of 1964, he had played in that great Ferencvaros team which beat Juventus in their own Stadio Comunale to win the Inter-Cities Fairs Cup the following spring, partnering the wonderful Florian Albert. Albert would pip Bobby Charlton and Jimmy Johnstone to the European Footballer of the Year award in 1967 then both men would lead Ferencvaros all the way to the final of the Fairs Cup again the next season, this time losing a two-leg tie with Leeds United by a single goal.

That summer, Varga would travel with the Hungarian national team to defend their Olympic title in Mexico City, following which he chose to defect to the west as the Prague Spring saw huge conflict and unrest in many of the Warsaw Pact countries.

He would land in Berlin via Standard Liege, playing for three seasons with Hertha before being cited in the Bundesliga bribes scandal in 1971 and subsequently banned from playing in Germany for two years. Hertha then sold him to Aberdeen, allegedly against the player’s wishes. If that were true, it did not appear to impact his form, as I recall him being a real star player at the time. He certainly played his part against Celtic on Saturday, 28 October 1972, scoring both home goals as the Bhoys edged a five-goal thriller at a packed Pittodrie, thanks to strikes from Dixie Deans, Lou Macari and Kenny Dalglish. Incredibly, outwith an extra-time 3-2 Drybrough Cup win at Parkhead back in August, this would be Celtic’s first victory over Aberdeen since October 1969. 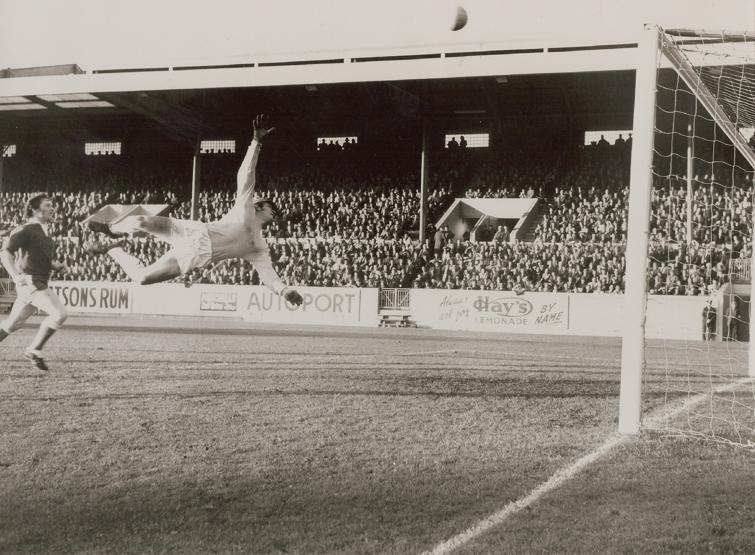 Stein’s men would record a second successive 3-2 win in midweek, to square off the League Cup quarter-final tie with Dundee, following the first-leg defeat at Dens Park. It was a terrific game, one I recall so well, despite the best efforts of controversial referee R H Davidson of Airdrie, officiating at his first Celtic match since winning the Scottish Cup with Aberdeen back in 1970.

His performance was no better on this evening, somehow managing to upset both teams, a 40,000 crowd and Jock Stein, who marched across the Parkhead pitch to remonstrate with him as the teams summoned up the energy for extra-time. Harry Hood replaced Kenny Dalglish for the additional 30 minutes but there would be no further scoring, a play-off now required to decide who would join Aberdeen, Hibernian and Rangers in the last four. 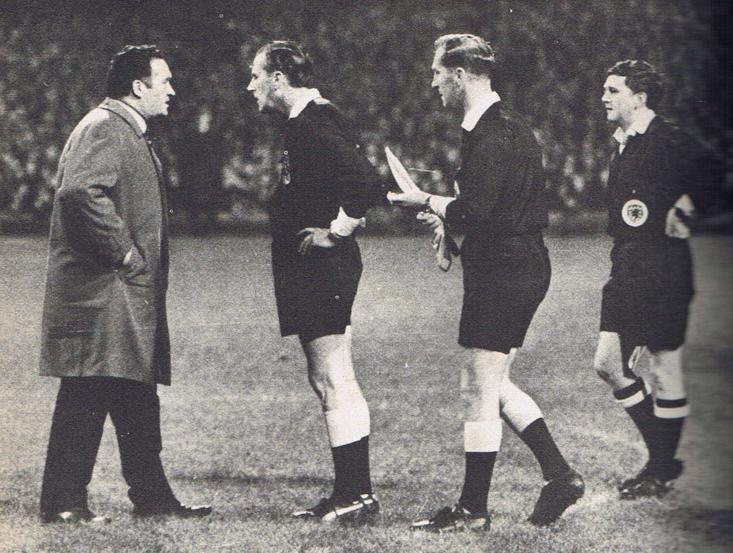 It was the turn of Dundee’s Tannadice Street neighbours to visit Celtic Park three days later, Saturday, 4 November 1972. Harry Hood was again on the bench, getting the nod to replace Dixie Deans after an hour with the Hoops 2-1 ahead against Jim McLean’s Dundee United. He would be heavily involved in Celtic’s third and clinching goal, his exquisite lob beating Hamish McAlpine but crashing back off the crossbar, Lou Macari applying the finishing touch for 3-1. 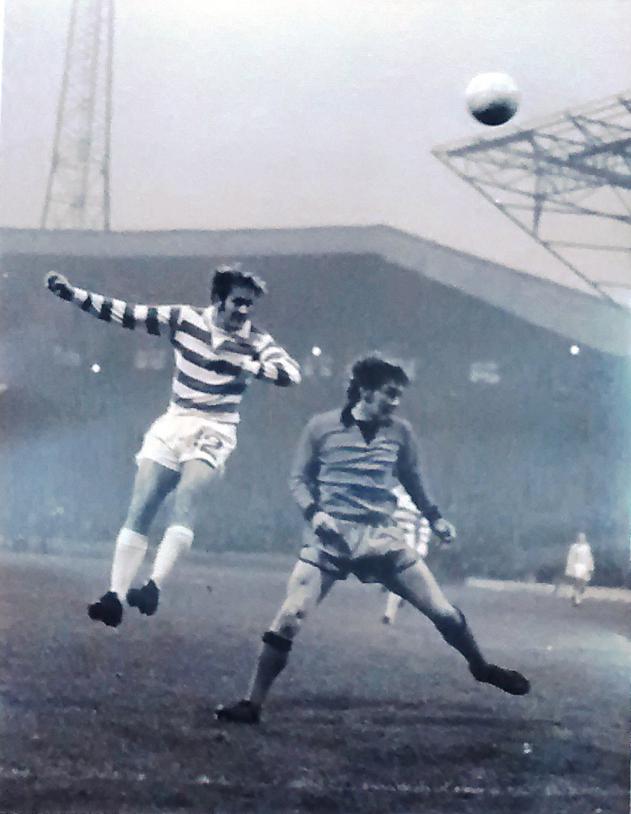 The recent domestic recovery would be quickly forgotten after a dreadful night in Budapest in midweek. Wednesday, 8 November 1972 would be one of the low points of the wonderful Jock Stein tenure, as his former European champions were put to the sword by a lightning quick Ujpest Dosza attack, spearheaded by Ferenc Bene and Antal Dunai.

In three previous meetings between the clubs, they had threatened to convert that pace and skill into goals and tonight they would make good on that threat. I suppose the writing was on the wall when after rushing home from school Groundhog Day-style as I had exactly eight months previously, we tuned in to the sad face of Arthur Montford advising that the satellite link had failed. That would not be the only failing as Celts found themselves three goals down within 20 minutes, news of each goal relayed by the bold Arthur with an expression which would have done the Reverend I M Jolly proud. Perhaps the only surprise was that the Hungarians did not add to their tally, however, their job was done long before Stein introduced Harry Hood and Dixie Deans for Bobby Lennox and Danny McGrain after the hour mark. 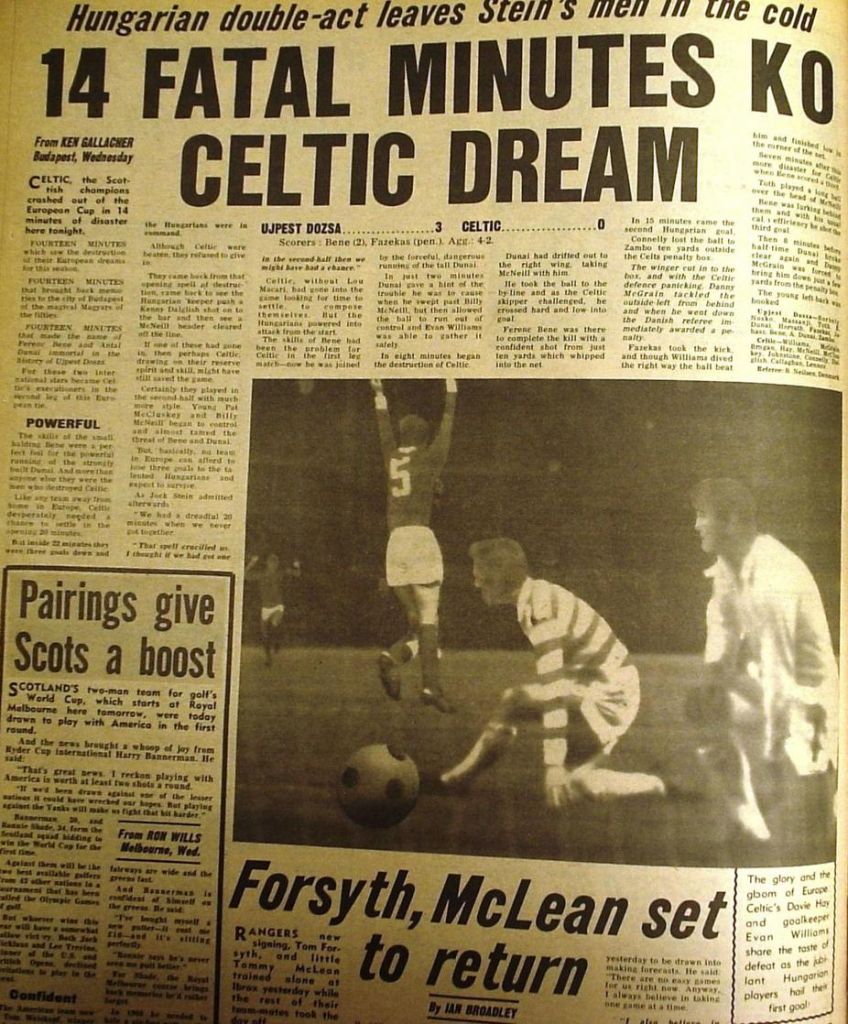 The Hungarian champions would face their Italian equivalents Juventus in the quarter-final, recording an excellent goalless draw in the Stadio Comunale then producing the same lightning start to the return leg that had destroyed Celtic, 2-0 up after 13 minutes with one foot in the last four. On this occasion though, the Old Lady would use her vast experience to claw her way back into the tie before going through on away goals. Ujpest would make the semi-final the following season, holding eventual winners Bayern Munich to a 1-1 draw in Budapest before finally succumbing to two late German goals in the Olympiastadion. Proof, if any were needed, that they were a more than useful side over that three-year period. 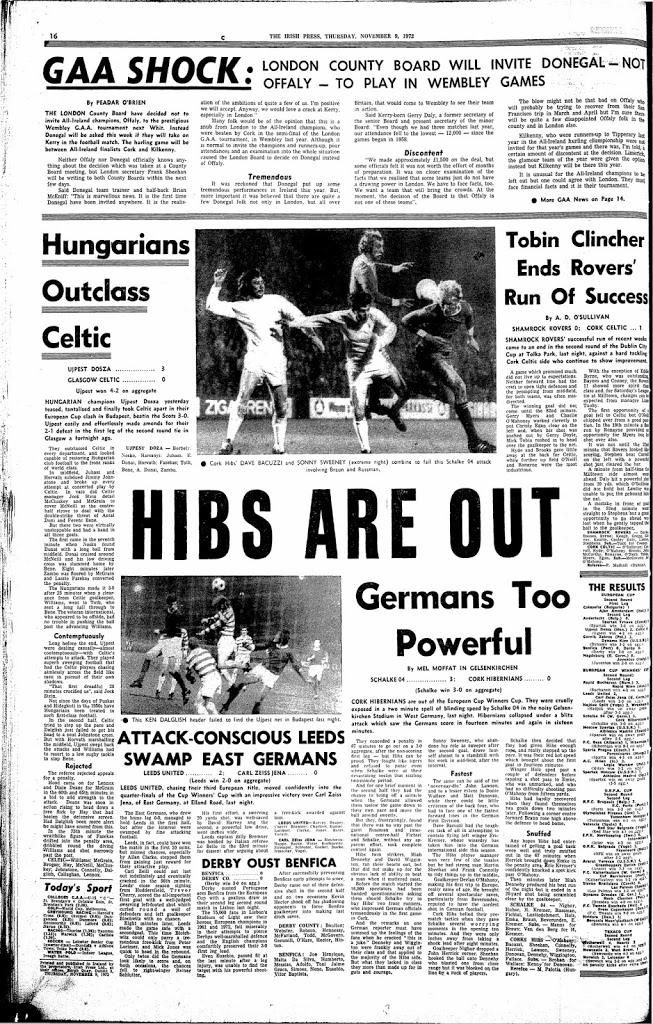 Back in Glasgow, Jock would have much to reflect on as for only the second time since his appointment as Celtic manager, his side had failed to reach the quarter-final of a European tournament. The contrast in those two matches in Budapest in the spring and autumn of 1972 could hardly have been greater, the euphoria of what he had called the “best performance since Lisbon” replaced by headlines such as “Celts outclassed” and “14 minutes of disaster.” There would be no heroic last-gasp winners or after-match parties with Hollywood royalty.

Focus could now turn on the quest to secure a third domestic Treble.

Previous Article‘So be it’, Lennon would accept decision to suspend season
Next Article Team’s Up – Soro back in, Griffiths and Edouard start up top