Harry Hood recovered from an ankle knock to take his place in the Celtic team for the biggest game of his life, the European Cup second-round tie with Benfica at Parkhead on Wednesday, 12 November 1969. Almost 75,000 supporters crammed into the east end cauldron to see the two heavyweights battle it out for the right to progress to the quarter-final, in the days before seeding protocols rendered such fixtures impossible.

The Lisbon Eagles had been vying with the Milan duo of Inter and AC for the right to succeed Real Madrid as the new continental masters, all three clubs having managed two successes in the decade to date. Benfica had also reached the three finals of 1963, 1965 and 1968, whilst the Celts had broken the Latin monopoly in the heat of their home city in May 1967 and were now considered amongst the greatest sides on the planet. This was a clash of serious European royalty. Football Hollywood.

Jock Stein named the following line-up for the vital match.

The opening blockbuster came from the right boot of Tommy Gemmell, restored to the side from the naughty step and blasting a goal which if anything was even better than his strike in Lisbon, within two minutes from a free-kick. By the 15-minute mark Celtic’s lead had doubled, Willie Wallace rifling home from an impossible angle, and it should have been 3-0 before half-time, Italian referee Concetto Lo Bello disallowing John Hughes’ headed finish for reasons known only to himself. That would prove a very important call. With 20 minutes remaining, Jock Stein’s men did get the third goal their play deserved on the night, Harry Hood drifting in to nod home Bobby Murdoch’s cross past Henrique to give Celts one foot in the last eight.

Three days later, I made my first visit to Fir Park to watch an unchanged Celtic take on a home team which included Peter McCloy, Tom Forsyth and Dixie Deans in their ranks. Harry Hood would take advantage of hesitation between the future Ibrox defenders to give the Hoops an early lead, Deans equalising just before the interval. With 15 minutes to play, man-of-the-match Bertie Auld sent over a corner kick which John Hughes reached first to glance the ball past McCloy and win the match for Celtic. 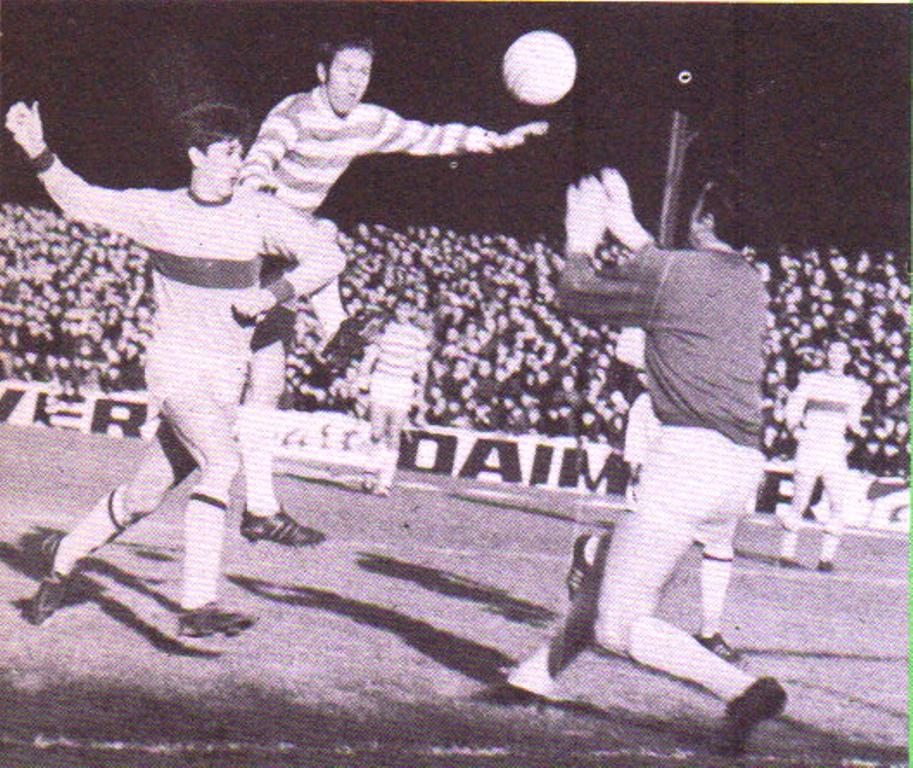 Jock Stein led his men back to Lisbon for the first time since that unforgettable evening two years earlier, the players staying in the same Estoril hotel and training at the Estadio Nacional ahead of the return leg. Seven of the men who had started that match would again be in the team, the injured Simpson, Clark, Chalmers and Lennox missing out, as did Harry Hood, who started on the bench as Stein went with the more defensively-minded Tommy Callaghan. 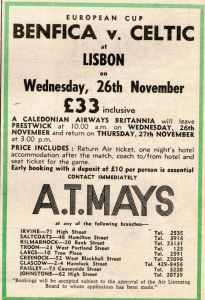 It would be a very different Lisbon, a monsoon prevailing for most of the night and a storm brewing on the pitch, as goals from Eusebio and 1968 final scorer Graca had reduced Celtic’s aggregate lead to one before the interval. With no further score and the clock ticking past the 92-minute mark, the Dutch referee awarded Benfica a final corner-kick. You could write the script as the ball was knocked all the way to the far post before being headed back across the Celtic goalmouth, John Fallon stranded as Diamantino levelled the tie in the most dramatic circumstances.

With a full pitch invasion in progress, the teams had to leave the Estadio da Luz field before extra-time could commence. When it did, with Hood and George Connelly on for Callaghan and Bertie Auld, perhaps the only surprise was that the shellshocked Celts did not concede a fourth goal to blow a 3-0 lead, as their predecessors had done five years earlier against MTK in Budapest, thus avoiding a most unwanted record. Instead, by now in the early hours of Thursday morning, legendary captains Billy McNeill and the great Mario Coluna of Benfica would squeeze into the referee’s dressing-room where Cesar would correctly guess ‘Heads’ twice to send the Hoops into the quarter-final via the most unsatisfactory of methods. I seem to remember only finding out the result of the match the following day, such were the problems with communications that night.

As a footnote to this outcome, Celtic chairman Bob Kelly would successfully lobby UEFA to have this scenario abolished. We would soon see the introduction of a penalty shootout as a means of deciding drawn ties, Celtic, ironically, one of the earliest clubs to lose out by this new method which they had fought to introduce. Perhaps, Bob should have just kept quiet! 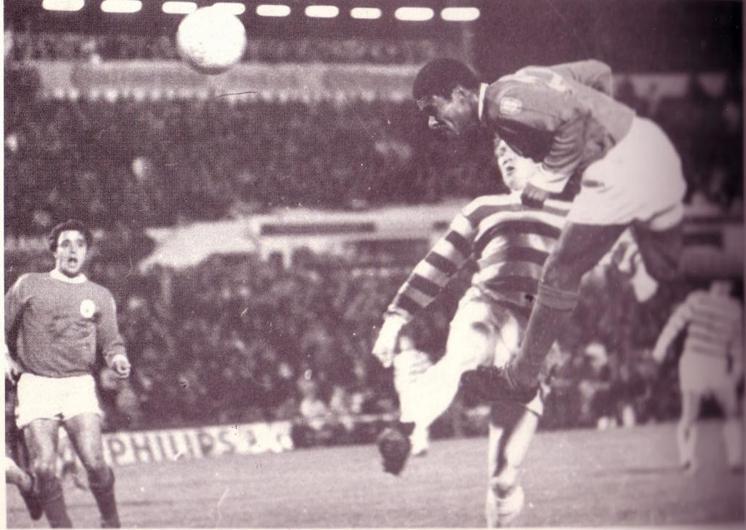 On the same night, there were dramatic events taking place in the runners-up part of Glasgow as Rangers manager Davie White, Harry’s old colleague and boss, was sacked following back-to-back 3-1 defeats in the Cup Winners’ Cup at the hands of Poland’s Gornik Zabrze. The Ibrox club were top of the League at the time! The Poles were no mugs. Led by the great Lubanski, they would go on to eliminate Roma on a coin toss in the semi-final before losing in the Vienna final to Manchester City, still the only European trophy won to this day by the English club.

Back in Scotland, three days later, a much-changed Celts would go to an icy Cappielow for a tricky League fixture with Morton, who had drawn 2-2 at Ibrox the previous week. Lou Macari opened the scoring after 8 minutes with ‘Harry, Harry’ adding a second 12 minutes from time. Sadly, when a third Celtic goal went in, it wasn’t Kevin Barry on target, or we would have had the very popular song/chant of the day. “…and Willie Wallace” just isn’t as catchy for me. 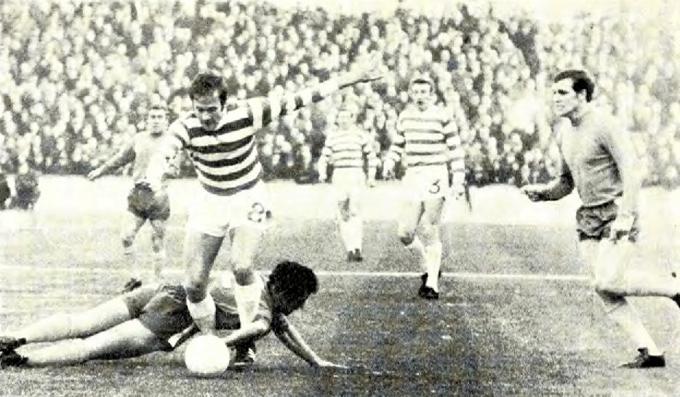 The decade would end with Stein’s champions sending out the most powerful of messages, with eight straight League wins. The victories at Motherwell and Greenock were followed by home successes over St Mirren and Dundee, then a 4-1 win over St Johnstone where Harry Hood completing the scoring. However, the best was saved for the following midweek. 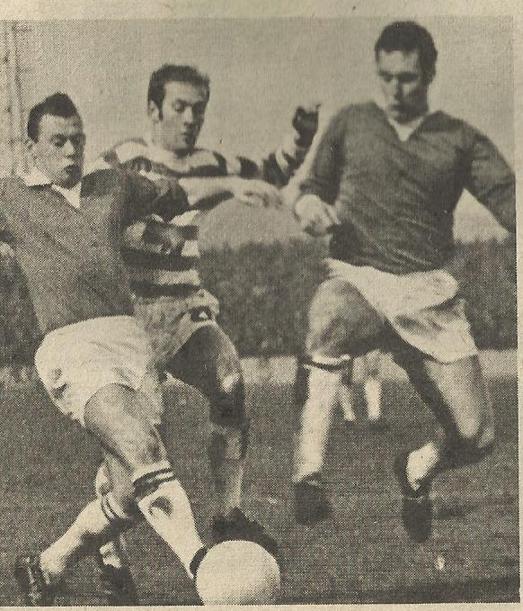 On Wednesday, 17 December 1969, Jerry Kerr brought his newly-Tangerined Dundee United side to Parkhead, watched by 26,000 and the new League leaders, Hibernian, in the stand. In all my years of following Celtic, I have rarely seen a performance of such power, and I never saw Jimmy Johnstone play better. The wee man was simply incredible, perhaps at his peak that night as he destroyed and toyed with the visitors. Bertie Auld had given Celts a second-minute lead before Harry Hood doubled that on the 15-minute mark. 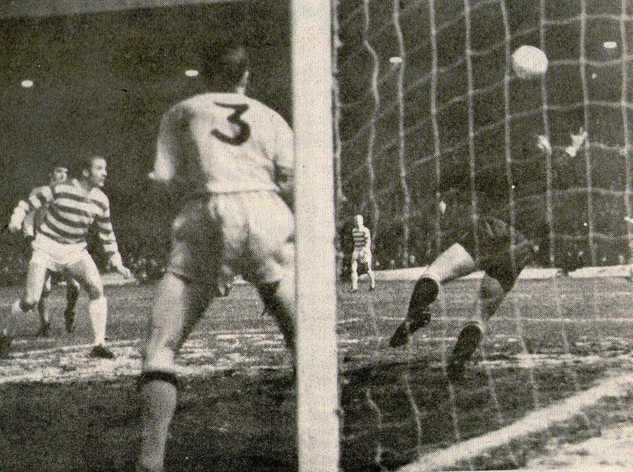 By half-time it was 4-1, John Hughes obliging after Ian Mitchell and Tommy Gemmell had traded penalty conversions, and within seven minutes of the restart it was 6-1, Kevin Barry/Willie Wallace with a quickfire double, most of Celtic’s attacking prowess stemming from the genius of Johnstone. Jinky would do everything but get on the scoresheet, at one stage hitting the post with a shot that gets further out each time I tell this story. Alan Gordon and Bobby Murdoch would manage to get on target before the Hoops declared at a magnificent 7-2. I was 8 years old at the time and recall standing towards the back of the Celtic End watching this magic unfold as if it were yesterday. It remains one of my all-time favourite memories of watching our beloved club.

The greatest decade in Celtic’s fabulous, unbroken history would then end with another two home wins, 3-1 over Kilmarnock then an 8-1 hammering of bottom dogs Partick Thistle. The only surprise that afternoon was that Harry Hood was not amongst the goalscorers, the former Sunderland and Clyde man replaced by Bobby Lennox, as his striking partners John Hughes and Willie Wallace claimed the headlines, Yogi with a hat-trick in the type of conditions he traditionally revelled in whilst Wispy grabbed a brace, the second marking his 100th goal for Celtic.

As 1970 beckoned, this had all the makings of another wonderful season for the fairytale club.

Thanks, as always, to the wonderful Celtic Wiki. More to follow on Harry Hood on The Celtic Star.