Having finally signed for his Bhoyhood club, more than four years after rejecting Celtic’s initial approach, Harry Hood would find his dream debut delayed still further. He should have played in the League game at Dens Park on Wednesday, 19 March 1969, two days after joining Celtic, however, unseasonal weather in the city of Jute, Jam and Jim Spence put paid to that. 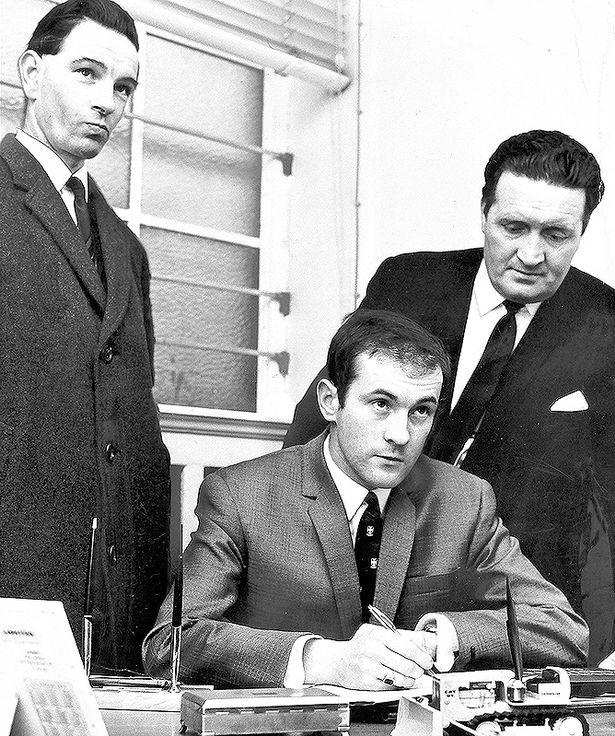 And he was ineligible for the Scottish Cup semi-final against Morton the following Saturday – my first visit to the national stadium, an eighth birthday gift from my dad – having played against the Hoops for Clyde in an earlier round. Like myself, Harry would have to watch from the stand as Jock Stein’s men recovered from the loss of a first-minute goal to clinch a place in the final with a 4-1 win over a Greenock outfit managed by former Celtic wing-half, Eric Smith. 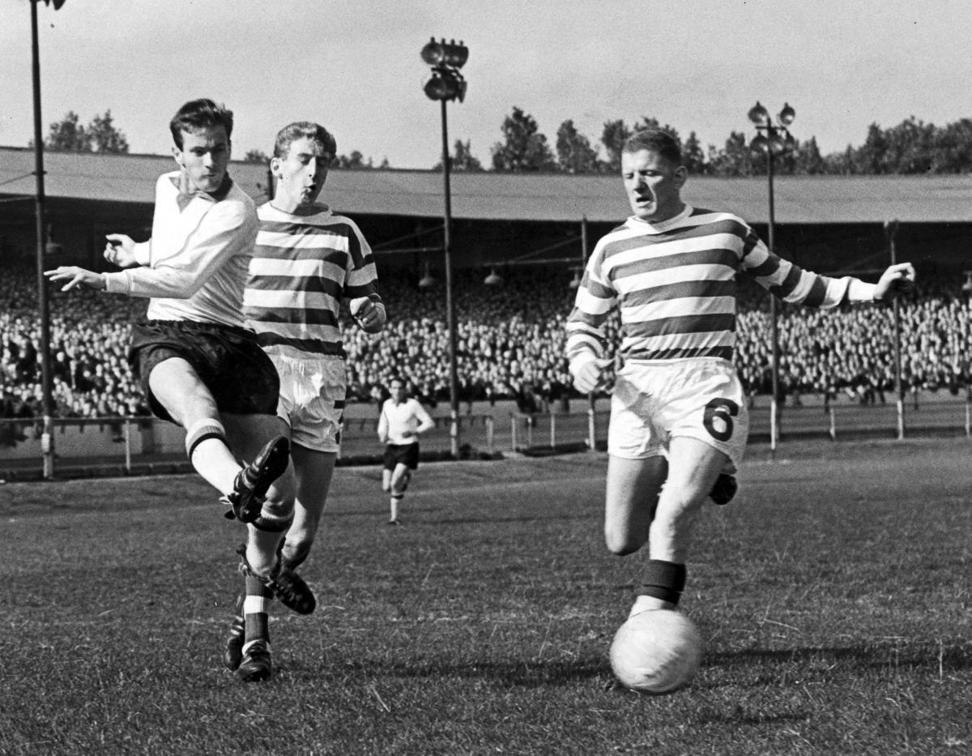 It was a bittersweet time for Celtic, the Bhoys still very much on for a second domestic Treble in three seasons having lost out agonisingly by a single goal to AC Milan in the quarter-final of the European Cup, “the Final before the Final” as the Italian media had described it. Many took the view that the Celtic squad of 1969 was even better than their famous predecessors of two years earlier. There was no doubt that having done the hard work in the San Siro, Celtic’s failure to beat I Rossoneri in Glasgow had been a huge opportunity scorned. There would soon be others, with the city of Milan again involved. 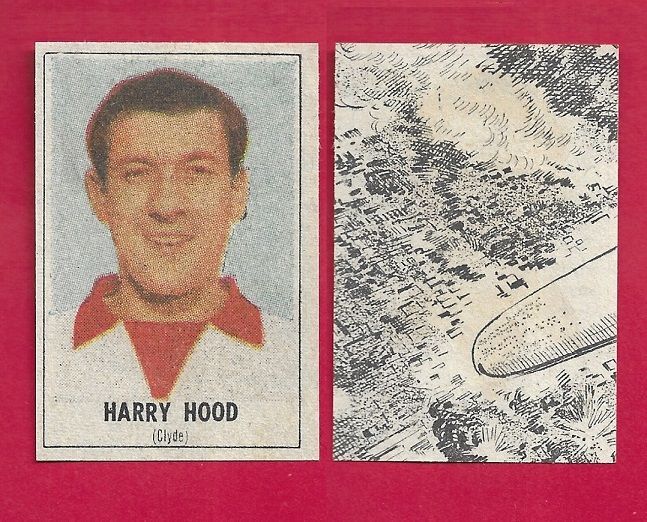 Harry would finally get to wear the Hoops on Monday, 24 March 1969, albeit he remained on the bench as Hibernian left Celtic Park with a well-earned 1-1 draw. Jock Stein named the following line-up as Joe McBride and Chris Shevlane returned to face their former club.

Willie Wallace headed Celts in front within 15 minutes, however, the visitors would withstand the Celtic barrage which followed before gaining the upper hand in the second half. It was no surprise when Joe McBride came back to bite the hand which once fed him by equalising near the end. It was the Hoops turn then to be under pressure as the Leith men looked for a winner. Disappointment at the ‘dropped point’ in a tight title race soon turned to joy as news came through that rivals Rangers had been beaten by Airdrieonians at Broomfield, Celts thus pulling three points clear at the top with seven matches to play in the quest for four-in-a-row. 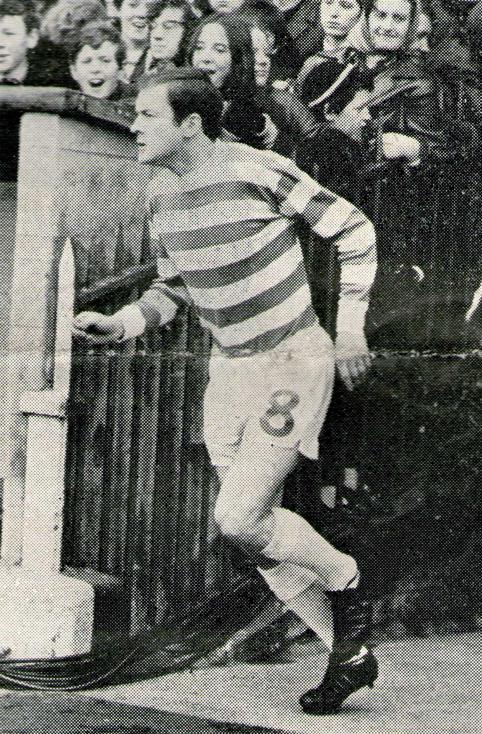 Five days later, Harry Hood would make his debut as a Celtic player, as the Bhoys travelled to Paisley to face St Mirren. He would replace Bertie Auld in a rejigged forward line, whilst Tommy Gemmell returned in place of Willie O’Neill. Tommy Callaghan was on the bench. It was Gemmell’s full-back partner Jim Craig who opened the scoring just before the break, the outstanding John Hughes doubling that lead 10 minutes into the second half. With 20 minutes remaining, Harry marked his debut with a Celtic goal, the stuff of dreams, firing the ball past Saints keeper Thorburn and defender Connell on the line, to complete the scoring at 3-0. 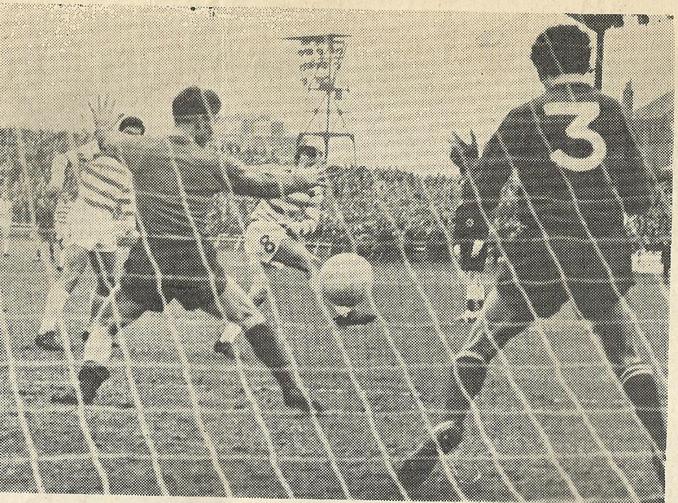 Harry got his first live experience of the fairytale club on his second appearance, two nights later, as an unchanged Celtic side took on St Johnstone at Muirton Park, the Monday before the delayed League Cup final with Hibernian. At half-time, the defending champions looked down and out against a side who continually caused Celtic problems in those days, two goals down and the in-form John Hughes stretchered off following one bad challenge too many.

They would then show the spirit for which they were renowned, first Willie Wallace then Tommy Gemmell finding the net to set up a frantic finish. With just seconds left on the clock, it would be the new Bhoy, Harry Hood, who would follow up to force home a dramatic winner. 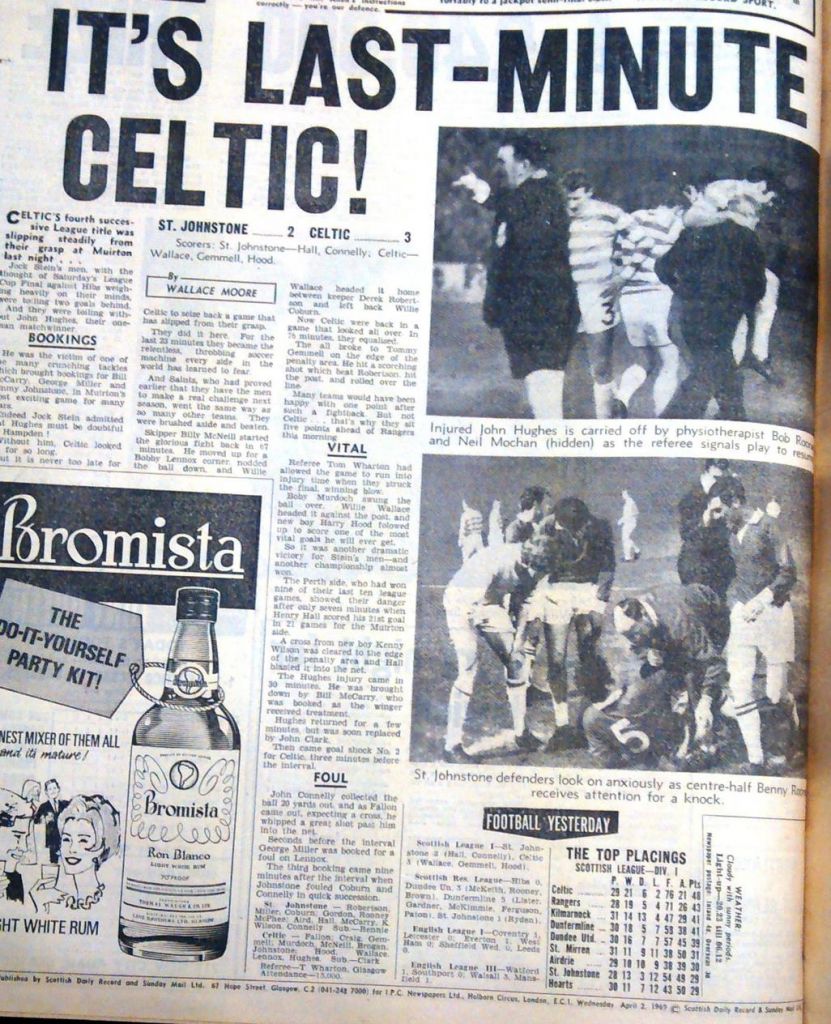 Hood would again be ineligible as Celtic won the first leg of the Treble at Hampden by claiming the League Cup, hammering a Hibernian side who had recently held their own at Parkhead by 6-2. Indeed, it could and should have been worse, the Hoops six goals clear with 15 minutes to play before two late consolation strikes gave the Leith supporters something to cheer about on the day. The Celtic Wiki talks about the Bhoys effectively winning two trophies on the same day, as a 2-1 win for Dundee United over Rangers at Tannadice all but secured four-titles-in-a-row.

Harry would be restored to the Celtic side for the midweek clash with Falkirk at Parkhead, Stevie Chalmers the player making way. The new Bhoy marked his home debut with his third goal in three starts after half an hour. He had been set up by Willie Wallace, who had earlier opened the scoring from the penalty spot, and Wispy would conclude the scoring at 5-2 in the final moments, following a Bobby Lennox double, the Buzz Bomb adding to his Hampden hat-trick to give him five goals in four days.

With six of the Celtic side away on international duty for Scotland, it was a shadow Hoops line-up which faced Rangers in the semi-final of the Glasgow Cup on Friday, 11 April 1969 at Parkhead. Nevertheless, Harry Hood continued his goal-a-game start by opening the scoring in the 13th minute of his first appearance in the derby fixture. It would prove to be unlucky for Celts as Alex Ferguson equalised within three minutes before a Willie Johnston hat-trick – his third coming in the dying seconds, won the match 4-3 for the Ibrox club. 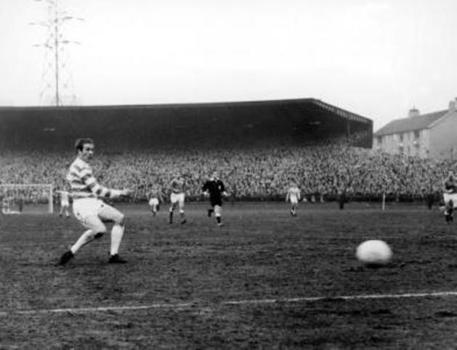 League business was resumed on Saturday, 19 April 1969, Celtic sharing four goals at home with Airdrieonians, with a Billy McNeill ‘winner’ controversially disallowed in the last minute, the Hoops skipper furiously remonstrating with referee Currie all the way to the tunnel. This was the first match Harry played for Celtic where he did not score, the champions now five points clear with three to play. 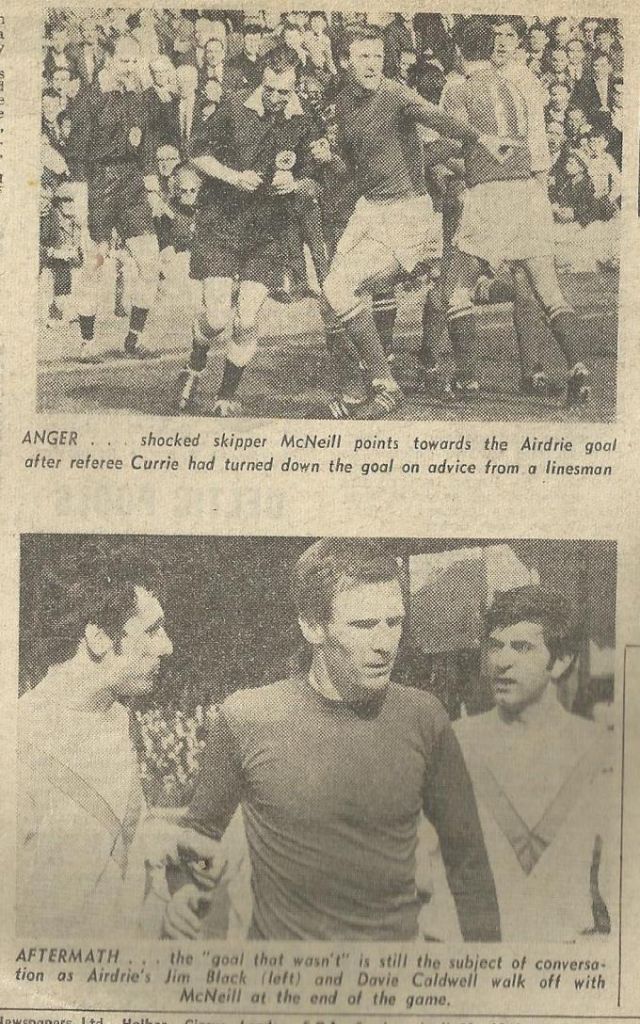 That scoreline would be repeated two nights later, at Rugby Park, Kilmarnock, Celts two goals down within half an hour on an evening where a win would secure the title. However, just as at Muirton Park at the beginning of the month, the champions would storm back. Kilmarnock captain Frank Beattie would make a hash of a Bobby Murdoch cross just after the hour to beat his own keeper, Sandy McLaughlan. McLaughlan had been a teammate of Harry at Roker Park before following Hood’s career path by returning to his former club, in his case to Killie in 1967. 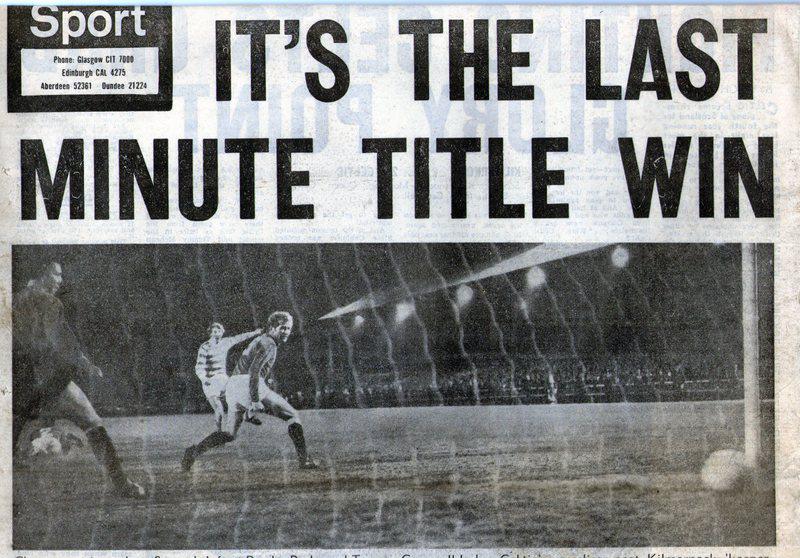 He would concede a second goal in stoppage time, as Tommy Gemmell’s shot pretty much secured the title, the last-gasp point sending Hoops six clear, Rangers with three games remaining and requiring a miracle. Still, as Kilmarnock themselves would know from their own final-day triumph at Tynecastle four years earlier, it ain’t over until it’s over. Any mathematical uncertainty was removed 24 hours later, as Rangers suffered another defeat in Dundee, this time by 3-2 at Dens Park.

After more than six years in senior football, and now playing for his third different club, Harry Hood had won his first major honour.

Celtic would pile on the misery for the Ibrox club the following Saturday, a quite sensational Hoops performance blowing Rangers away to win the Scottish Cup by 4-0, in front of 133,000 spectators, many thousands of whom had fled from the Mount Florida terracing long before Stevie Chalmers cheekily beat Norrie Martin for Celtic’s fourth.

Cup-tied Harry Hood, for now, could enjoy the party as an observer. He would not have to wait too much longer to taste that feeling for himself.

Hail Hail! Part 4 to follow on The Celtic Star.