Harry Hood would start his first full season as a Celt by scoring five goals in the six League Cup sectional fixtures as the Bhoys continued their love affair with the trophy they had won for the previous four seasons. The only blemish was a defeat at Ibrox, on Wednesday, 13 August 1969, a match where Harry would be up against some familiar faces. 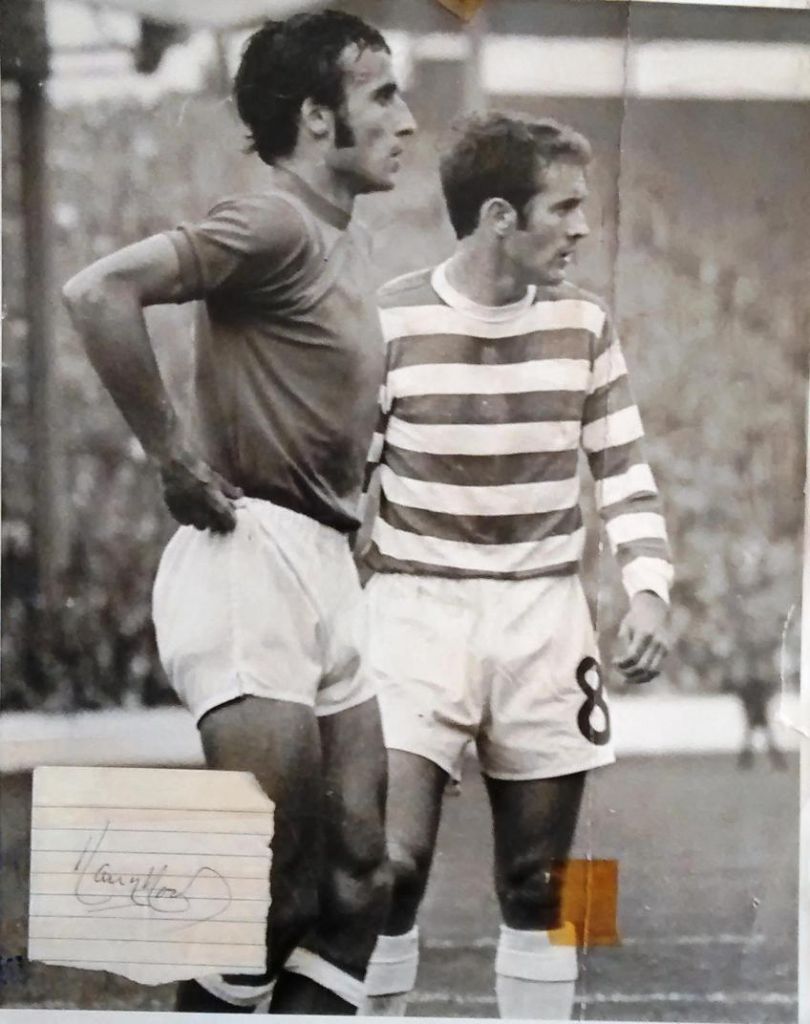 Jim Baxter had returned to Govan from Sunderland via Nottingham Forest, a free transfer signing by Rangers manager Davie White, Hood’s old Clyde teammate and the man who brought him back to Shawfield from Roker Park in 1966. There would be no old pals act, Harry opening the scoring within eight minutes with a superb solo goal, a lead Celts held until the interval. However, two goals in two minutes early in the second half from Orjan Persson and Willie Johnston would secure the points for Rangers in front of 72,000 spectators. 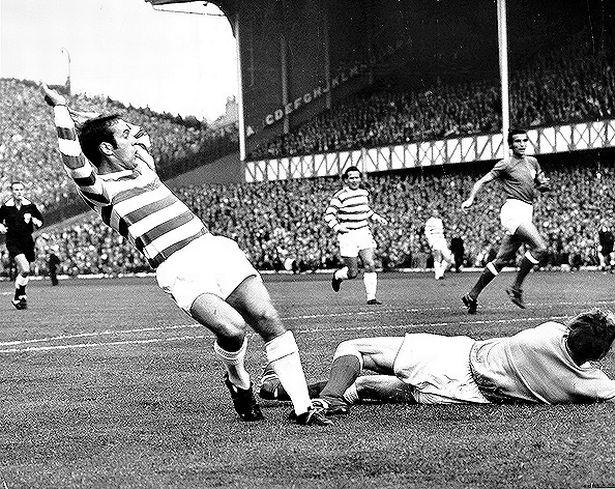 A Tommy Gemmell header redressed the balance at Celtic Park the following midweek, Rangers then appealing to the SFA regarding referee Jim Callaghan’s failure to send John Hughes off for a challenge on Willie Johnston, a move which would incredibly bring about an unprecedented 8-week suspension for the official. There would be some justice, happily, as Rangers then drew at Raith Rovers to lose out yet again to the Bhoys in this competition, the fifth successive season they had done so. 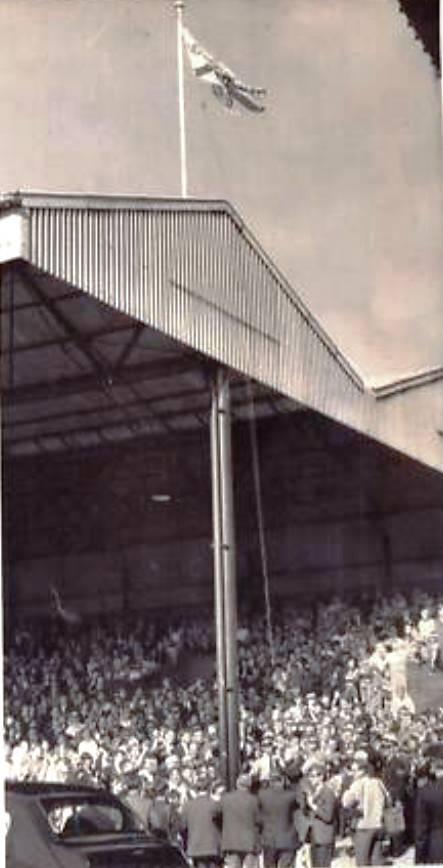 The first League game of the campaign was one I remember very well, St Johnstone the visitors to Celtic Park on Saturday, 30 August 1969, as the Championship flag was raised once again above the Jungle. The thing that sticks out for me, though, was the remarkable crowd inside the old ground, officially recorded as 60,000. That level of attendance was remarkably rare in those days, outwith the visits of Rangers and top European opposition.

The Celtic team who began the assault on a fifth successive League title was as follows.

Yet again, Celtic trailed with half an hour remaining, Saints scoring twice either side of a Stevie Chalmers strike. The last word would go to Harry Hood, his fine header from Chalmers left-wing cross buried past keeper Jim Donaldson for 2-2. 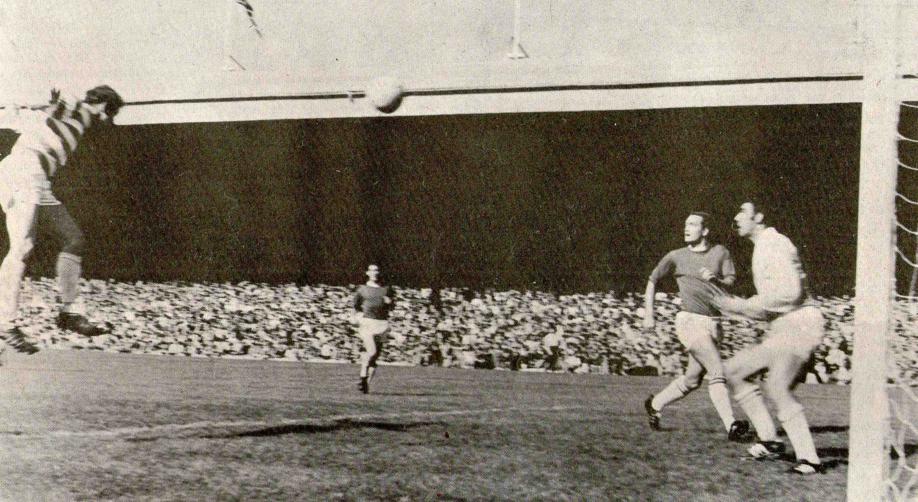 September brought another new adventure for Harry, Swiss champions Basel the opposition for his first European match. Hood would start on the bench before replacing Stevie Chalmers during the interval of the goalless draw in Switzerland. 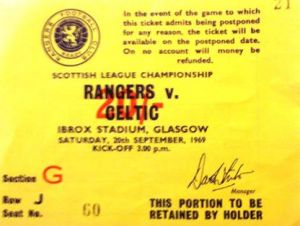 His continental debut was followed by a 1-0 victory at Ibrox three days later, Harry scoring for the third time against Rangers, this time his strike early in the second half enough to secure two valuable points for Celtic and hand them a first League victory in Govan in 12 years.

Chasing a Billy McNeill through ball, he sold Ronnie McKinnon a beautiful dummy before clinically striking the ball inside Gerry Neef’s near post in front of an ecstatic Broomloan Road end.

The month ended with Harry up against his old Clyde teammates for the first time, as Celts warmed up for the return leg with Basel with an unconvincing victory. With the match tied at 1-1 on the hour mark, Hood was bundled over for a penalty kick, which unusually Tommy Gemmell blasted wide. Bobby Lennox would secure the points by scoring his second goal of the afternoon just five minutes later, with Harry replaced before the end by Jim Craig. 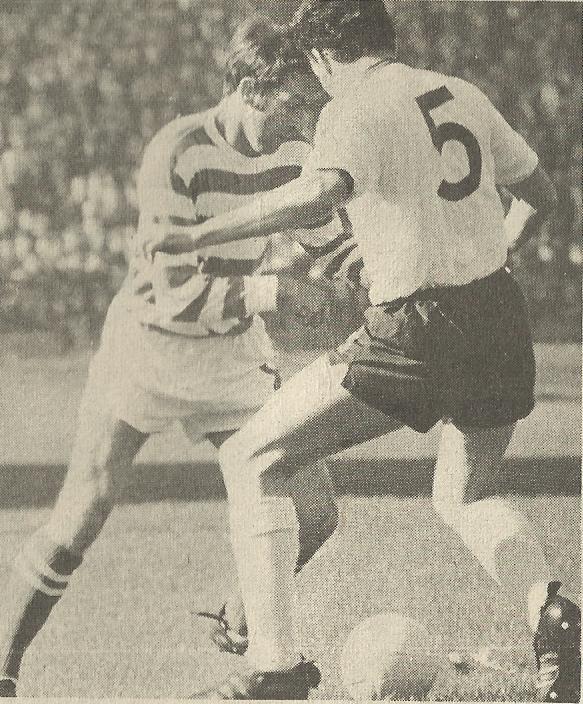 On his first home European appearance for Celtic, played on the first evening in October, Harry scored his first goal in continental competition inside the first minute, following up to net before many of the 50,000 crowd had taken their places after great work from Jimmy Johnstone. With an hour played and Celts 1-0 to the good, just an away goal between the Bhoys and a potential early exit, there was anxiety in the stadium until that European expert Tommy Gemmell blasted a shot from fully 25 yards into the roof of the net to finish the tie. 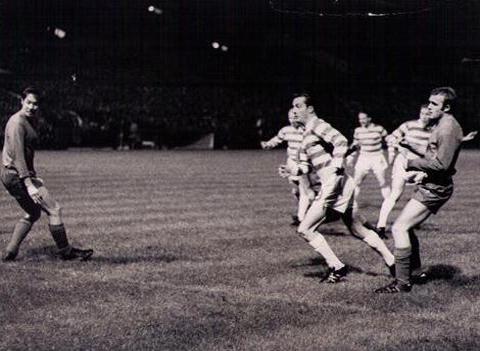 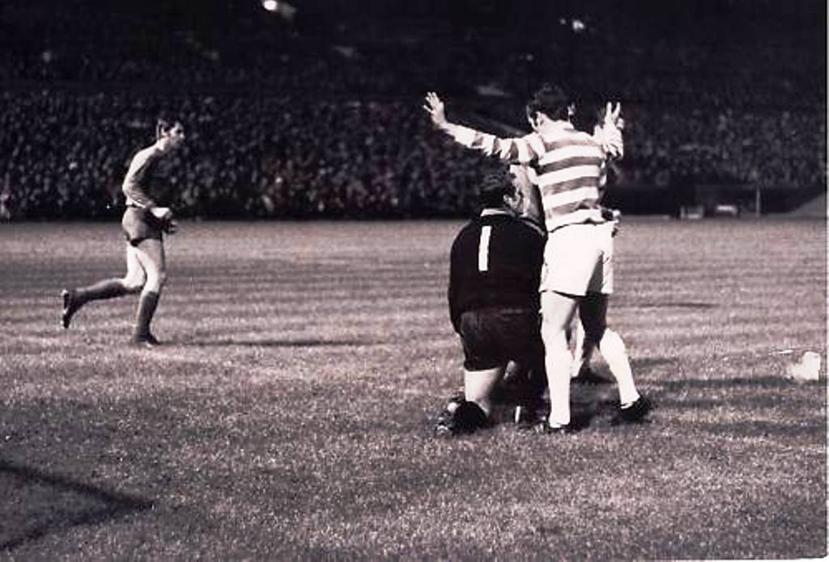 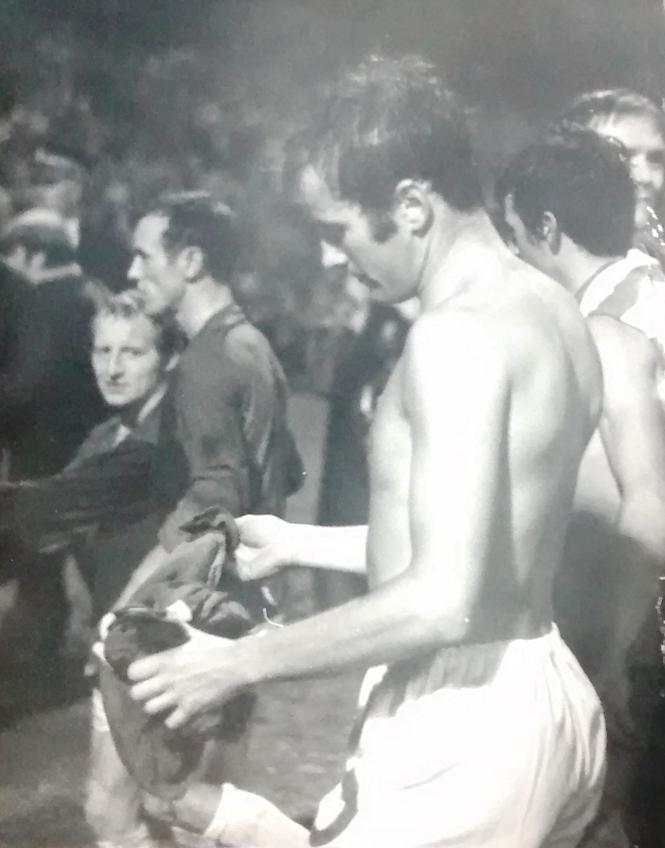 Whilst I was still “too wee” to attend the midweek European match, three days later, I was lucky enough to witness the home debut of a future Celtic superstar. Young Kenny Dalglish ran out for his first Celtic start against Raith Rovers, wearing the number four green jersey in the absence of Bobby Murdoch, whilst at the other end of the age spectrum Ronnie Simpson made his first appearance since the injury sustained at Shawfield back in February. On the day after his 25th birthday, Harry Hood would have to settle for a place on the bench, eventually coming on for two-goal Jimmy Johnstone with 15 minutes remaining and the Bhoys already 7-1 ahead.

There would be no further scoring in that match, however, Harry was back amongst the goals again in the League Cup semi-final replay against Ayr United at Hampden, played on Monday, 13 October 1969. Harry’s headed equaliser from Tommy Gemmell’s cross midway through the first half was followed by a Stevie Chalmers winner from Kenny Dalglish’s through ball. Whilst Celts would hold on to reach a sixth successive League Cup final, it would be at a cost, Ronnie Simpson stretchered off late on after dislocating the same shoulder as before. The legendary Celtic keeper would not play senior football again. It was the end of an incredible near 25-year career which had begun for him as a 14-year-old schoolboy in the same stadium all the way back in 1945. There will never be another ‘Faither,’ that’s for sure.

To make up for not taking me to Hampden on the Monday night, presumably, my Dad took me to Parkhead on the Wednesday, as former Third Lanark and Wolverhampton Wanderers goalkeeper Evan Williams made his Celtic debut, 24 hours after signing for his boyhood club. The opposition was Clyde in a Glasgow Cup semi-final, Harry one of several first-team players rested as Jock Stein watched youngsters Vic Davidson and Lou Macari grab the goals and most of the honours in a 4-1 win.

Saturday, 25 October 1969 was the date of Harry Hood’s first cup final as a Celtic player. The opposition at Hampden was Willie Ormond’s St Johnstone, a first-ever major showpiece for the Perth outfit. Jock Stein made two surprising omissions from his team, Jimmy Johnstone moved to the bench despite scoring for Scotland on World Cup duty in midweek whilst Tommy Gemmell was dropped completely following his episode of ‘one-man-hunt’ with West Germany’s Helmut Haller in Hamburg. Gemmell would subsequently put in a transfer request and this would mark the beginning of the end of his wonderful career at Celtic Park.

Stein went with the following selection at Hampden, in front of 73,000 spectators. 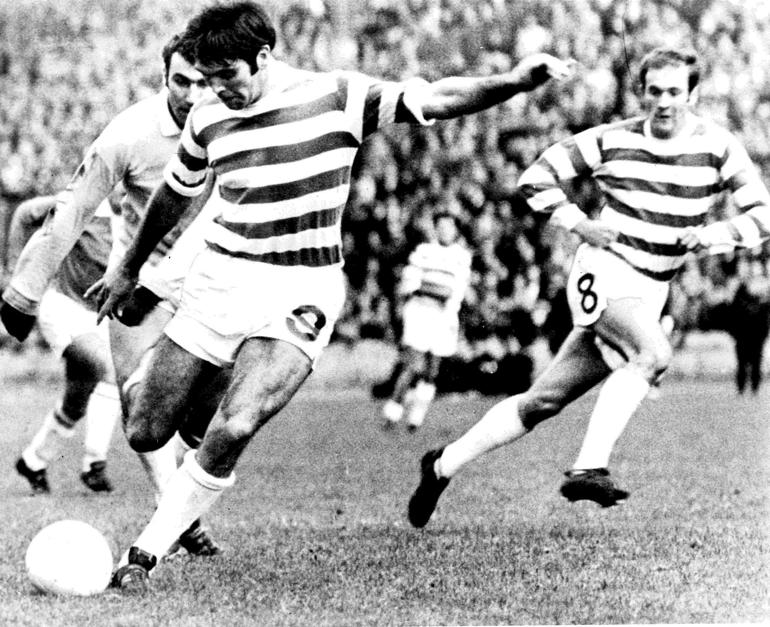 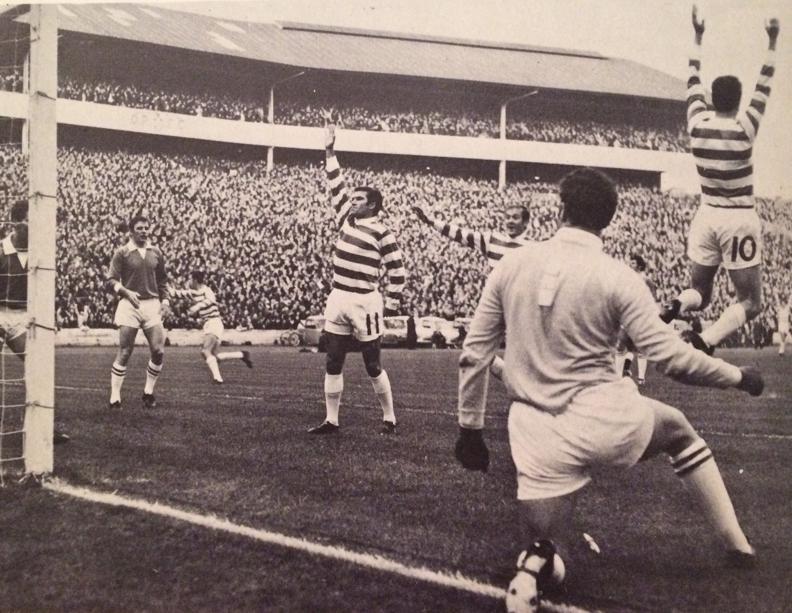 The final was settled by a goal after two minutes, Harry nodding a John Hughes cross against the crossbar with Bertie Auld the first to react to knock the ball home, just as he had at the other end of Hampden in the 1965 Scottish Cup final. Yogi would have a goal controversially disallowed, however, the main negative on the day was the broken leg suffered by Stevie Chalmers, which would put him out of action for a calendar year, the second Lisbon Lion to be struck down with serious injury that month. 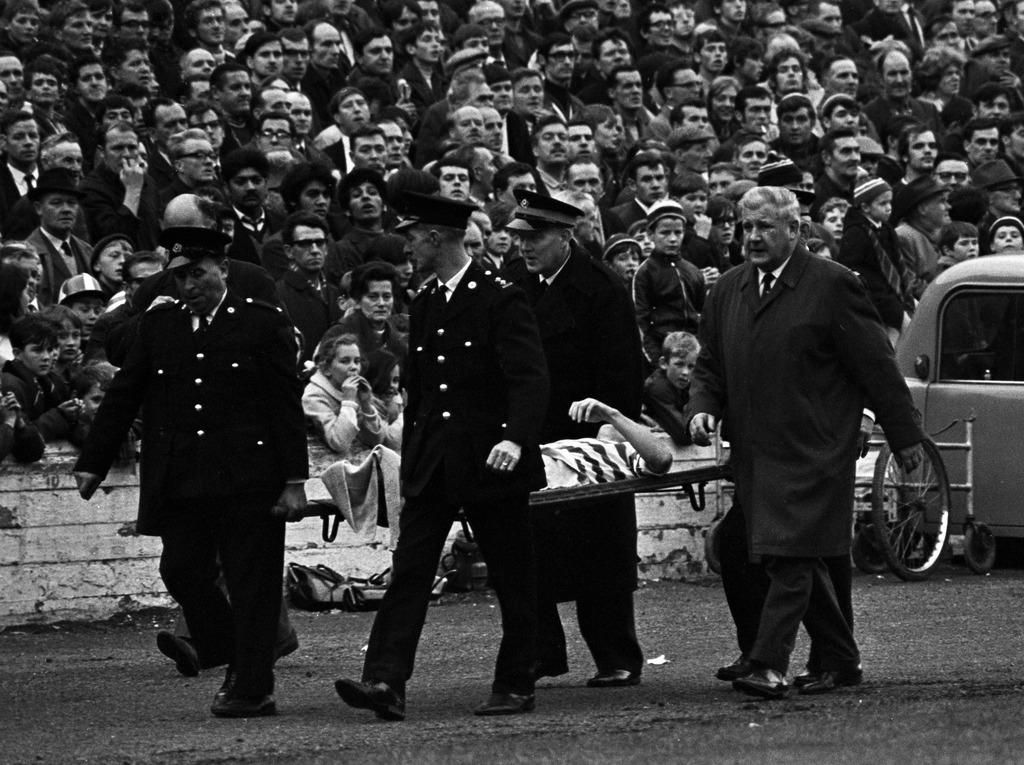 As Billy McNeill raised the League Cup aloft for the fifth successive season, Harry Hood waited patiently on the rostrum behind goalkeeper John Fallon for his first taste of cup-winning glory, and as a Celtic player at that. A fairytale moment for anyone with Hoops and hope in their heart. 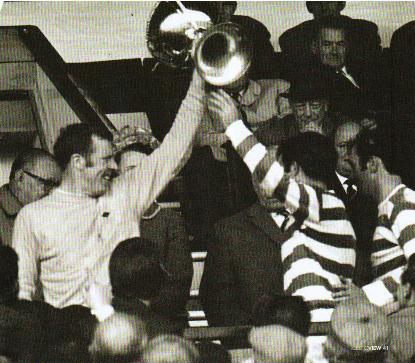 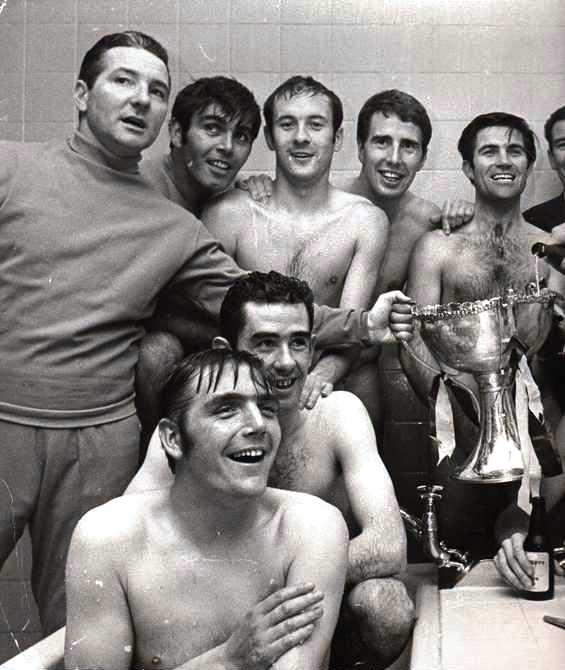 Part 5 to follow on The Celtic Star. Thanks, as always, to the wonderful Celtic Wiki.