Jock Stein used some of the Lou Macari transfer money to finally buy a goalkeeper of the quality to match his outfield squad, Scotland international Ally Hunter signed from Kilmarnock on Wednesday, 24 January 1973, for a fee thought to be in the region of £40,000. 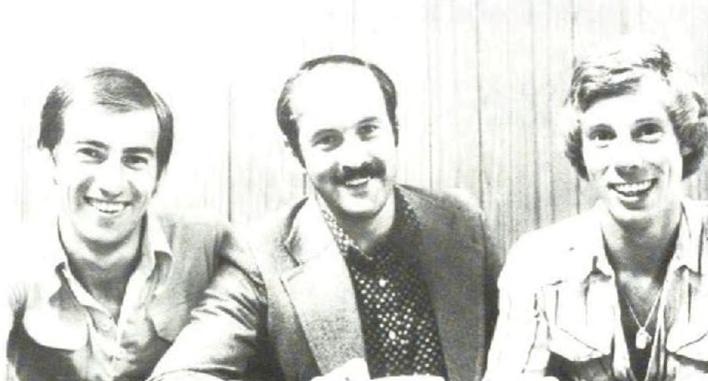 Hunter would make his debut three days later at Broomfield, a last-minute goal from Airdrieonians winger Kevin McCann ruining the occasion and putting another dent in Celtic’s hopes of eight-in-a-row. Dixie Deans had given the Hoops the lead early in the second half before winning a penalty kick just one minute after the hosts had equalised through Billy Hulston. For once, Bobby Murdoch’s aim was just a fraction out, his shot crashing off the post to safety. Celts would pay the price for that miss in the dying seconds, McCann’s strike after a goalmouth scramble enabling the bottom-dog Diamonds to put one over on the champions. 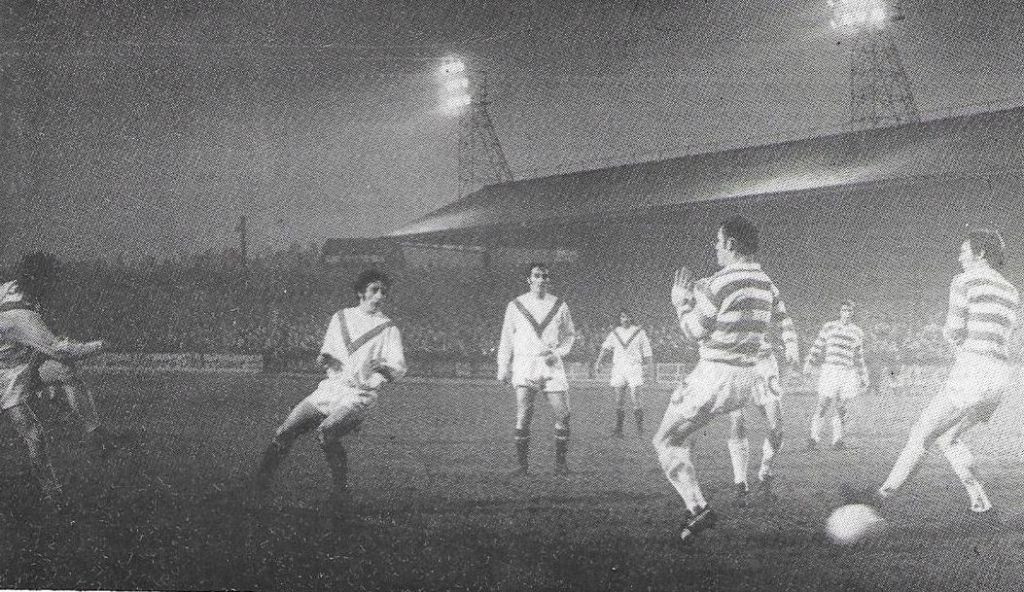 The final whistle triggered a series of unsavoury personal feuds kicking off as the teams left the field. A second January League defeat for Celtic saw Rangers lead at the top stretch to three points.

February brought the welcome return to the dugout of Jock Stein, following his recent health scare, together with another signing from the Macari war chest. Another £35,000 cheque saw left-winger Andy Lynch fulfil a Bhoyhood dream by joining from Hearts on Wednesday, 7 February 1973. 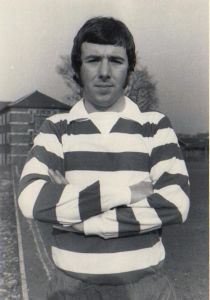 He watched from the Rugby Park stand that very evening as Celtic managed to play one of their three games in hand on Rangers. This is another one of those nights which I can remember so well despite the near five decades which have passed since.

The main reason for that is that I was one of thousands of Celtic supporters who travelled to Ayrshire on a horrific night in the hope that we would witness Celtic’s 6,000th League goal. It was by no means guaranteed, given that Stein’s men required to score five against a team battling for survival, however, they would get within touching distance before the woodwork, yet again, played a part in denying a Hoops goal.

From my vantage point on the back wall of the old covered enclosure opposite the stand, I had a birds-eye view as Ally Hunter marked his early return to Kilmarnock by producing a series of tremendous saves. He would provide the platform for a rather flattering victory on the night as goals from Kenny Dalglish and Jimmy Johnstone saw the Bhoys head down that narrow Rugby Park tunnel two goals to the good at the interval. 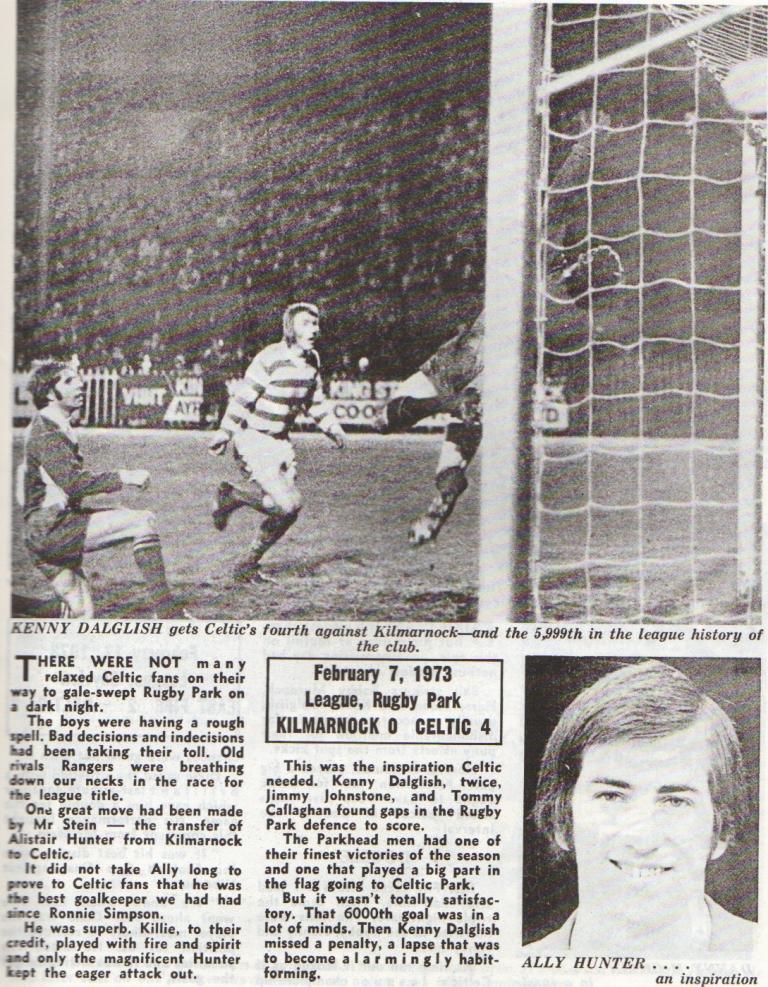 The hosts had seen a valid-looking claim for offside dismissed as Celts took the lead, and they would be up in arms again within five minutes of the restart as Tommy Callaghan stroked home a third goal with the Killie defence having stopped on seeing a linesman’s flag raised. Referee John Paterson again ignored the assistant’s advice to award the goal, Kilmarnock’s night going from bad to worse as Harry Hood, a second-half replacement for Dixie Deans, set up Dalglish for his second of the match with seven minutes remaining.

With only one goal now required to hit the 6,000 mark, the atmosphere inside the enclosure where the majority of the spectators were seeking refuge from the rain was lifted by several decibels. With two minutes to play, history was there for the taking, Celts awarded a late penalty kick after Johnstone was impeded in the box. Up stepped King Kenny to face Hunter’s replacement, Jim Stewart, a hat-trick and a place in the record books then denied as his shot clattered off the crossbar and into the night air.

Andy Lynch would replace Harry Hood on the bench as the 6,000-goal circus rolled back to Celtic Park that weekend for the visit of Partick Thistle, the prospect of seeing the historic goal swelling the attendance to 32,000. The Jags fielded Lisbon Lion Stevie Chalmers plus three men who would later wear the Hoops, Alan Rough, Ronnie Glavin and Joe Craig.

They would take the lead through Bobby Lawrie 10 minutes before the break on an afternoon where Ian Foote appeared to be making his own attempt at creating history, perhaps some kind of Reverse Dallas Award by denying Celtic no fewer than five penalties, albeit given our recent record from the spot those were no guarantee of goals. Lynch would replace Bobby Lennox on the hour for his Celtic debut and so was in pole position to witness the 6,000th goal, 11 minutes later, Bobby Murdoch firing home after Rough had blocked a Kenny Dalglish header. 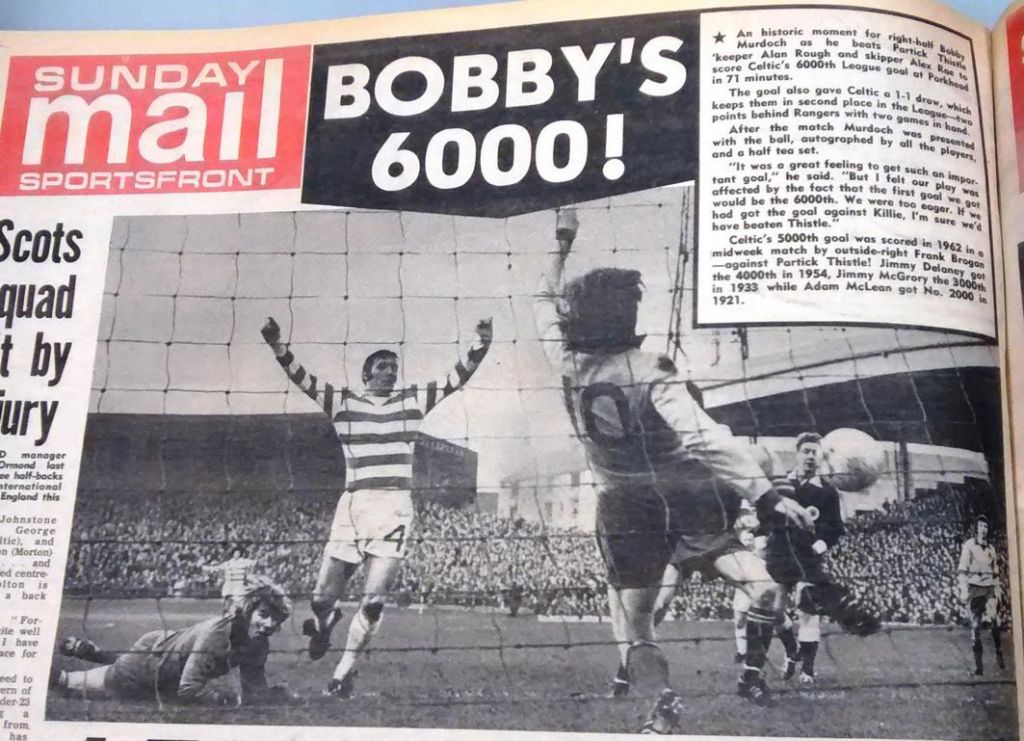 With the record now secured, the anxiety of the supporters then switched to winning the game and the vital two points. In the dying seconds, Tom Callaghan looked to have done that as his shot beat the Thistle goalkeeper, 30,000 groans filling the Parkhead air as yet again the crossbar rather than the net stopped his effort, and another point slipped agonisingly away.

In midweek, there was another historic occasion which did not quite go to plan. A Scotland team featuring Kenny Dalglish and the recently departed Lou Macari took on England at Hampden in a match to celebrate the centenary of the SFA. It was a first match in charge of the national team for new boss, Willie Ormond, and a first live taste of a fixture I had followed for years on television and print for Yours Truly. It was also the night English skipper Bobby Moore made it a century of caps, and he can rarely have enjoyed such an easy 90 minutes in the 99 which preceded this St Valentine’s Massacre.

A few months earlier, I had stood in the schoolboy enclosure in front of the main stand at Hampden and watched Celtic tear a terrific Dundee team apart in a League Cup quarter-final play-off. Tonight, ankle-deep in snow, the coldest I have ever felt at a football match, I had a worms-eye view from the same spot as the English attack of Mick Channon, Martin Chivers and Allan Clarke – all appearing about 7’ tall – helped themselves to goals in a 5-0 rout, something I thought I would never see at Hampden. It was 3-0 within 15 minutes as the nightmare unfolded before my eyes. Scotland goalkeeper Bobby Clark had not looked clever at several of the goals and would never play for his country again, leaving the door open for the new Celtic stopper, Ally Hunter, to receive his chance.

Three days later, Saturday, 17 February, it was back to Celtic business as we headed for Methil and a League fixture with East Fife. We took up position immediately behind the goal, just as we had done 10 months earlier as Jock Stein’s Class of ‘72 created a new Scottish record of seven successive titles. That would be the only comparison on an afternoon when the quest for an eighth flag could have been seriously derailed. The romp in the April sunshine would be replaced by a dark slog on a muddy Bayview, for a match that will live long in the memory.

The Celtic team lined up as follows. 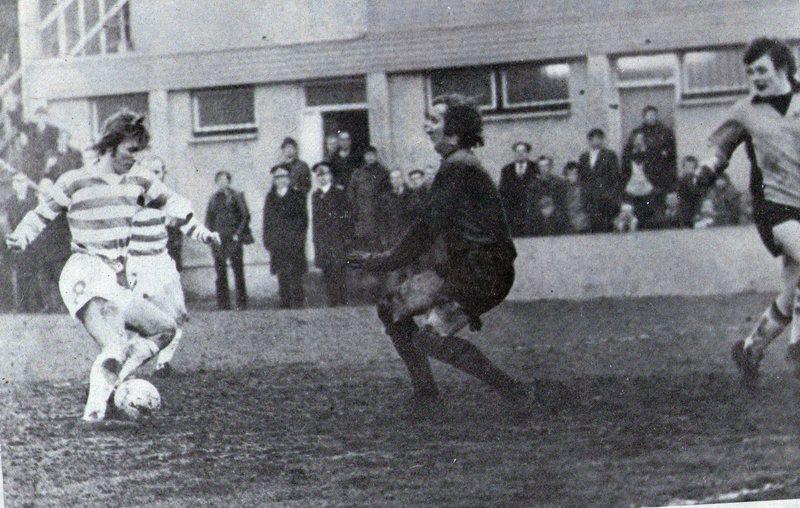 The frozen weather during the week had taken its toll on many of the other fixtures scheduled for that afternoon, amongst those Rangers home clash with struggling Arbroath. This meant that a Celtic victory would see them replace the Ibrox club at the top of the table, whilst still having a game in hand. All was going according to script at the interval, Celts ahead through a Dixie Deans strike midway through the first half, however, the second period would produce incredible drama from the kick-off.

Within six minutes, the Fifers had turned the game around, a rather soft penalty award converted by Billy McPhee before Walter Borthwick gave the hosts the lead. Cue the fightback, as the champions battled back from the ropes. With 13 minutes remaining, their efforts looked to have paid off, as referee George Smith pointed to the spot for the second time. One of the pleasures I really miss from those days is being so close to the action behind the goals on such grounds as Bayview.

We could almost see the whites of Bobby Murdoch’s eyes as he placed the ball in the mud, his shot beating Ernie McGarr but yet again striking woodwork, just as he had done against Airdrieonians and Kenny Dalglish at Kilmarnock with Celtic’s two previous penalties. There was an instant reprieve and sharp intake of breath as Smith indicated a retake for intrusion by one or two East Fife defenders. With Murdoch having recorded two successive misses, up stepped Harry Hood to equalise for Celts…only for the bold McGarr to stick out a foot and keep it at 1-2. 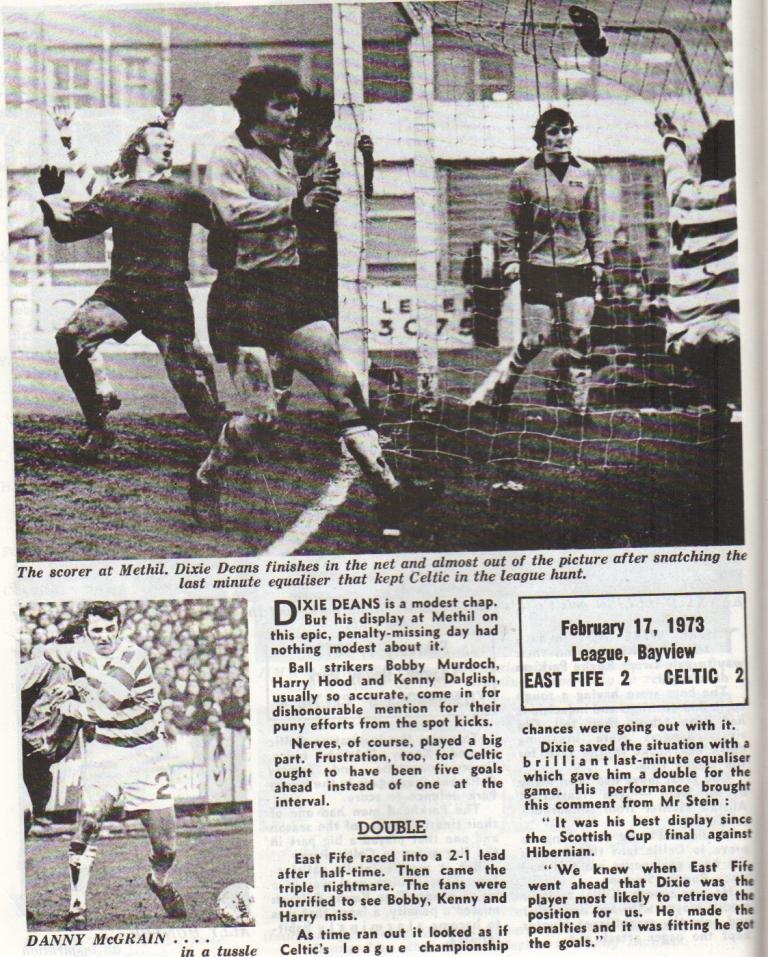 Another 10 minutes of desperate attacking play from the Hoops led to a third spot kick of the afternoon, four if you include that retake. This time Kenny Dalglish is the man entrusted to get the job done, his low shot heading for the corner before McGarr produced a tremendous save at his post. With three penalty attempts failing to produce an equaliser, we could be forgiven for filing this in the ‘not our day’ folder, however Stein’s men were nothing if not resilient. As the clock headed for 90 minutes and excitement at fever pitch, a Tom Callaghan corner is headed home by Deans to a sigh of joy and relief which would have been heard back in Glasgow. 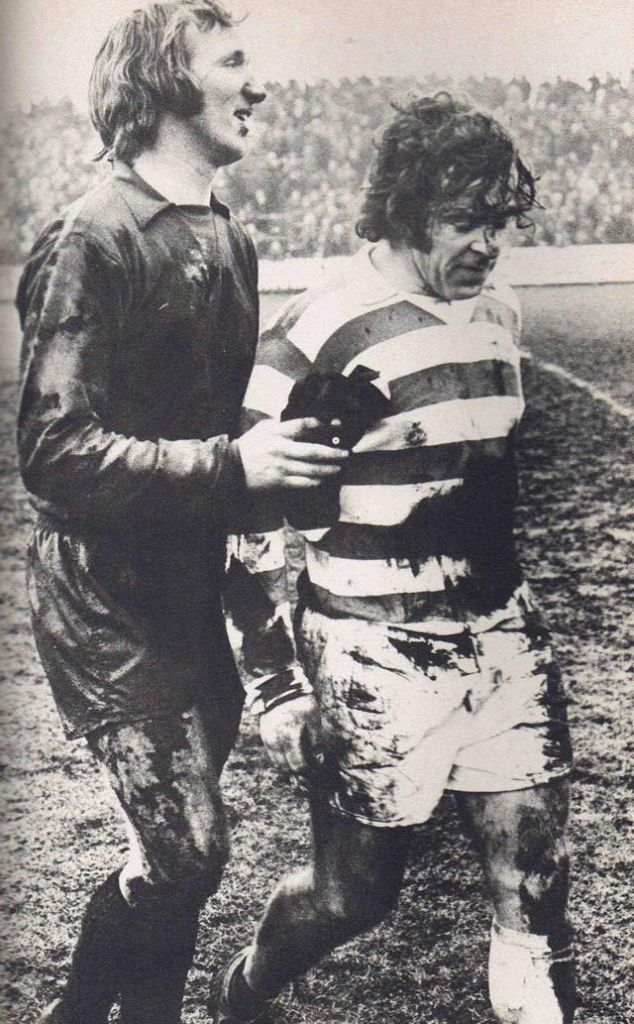 The seven League games played in 1973 had produced just three wins, whilst two matches had been drawn and two lost. Hardly, the form of champions, enabling rivals Hibernian and Rangers to smell blood and create a genuine title race. Further, Celtic had now missed with five successive attempts from the penalty spot, with three different players involved.

There would be much work to be done if the dream of eight-in-a-row was to be realised.