You are at:Home»Latest»On this Day, 2012: Gary Hooper sends Celtic to the top of the League

A look back in time to this day in 2012, sees Celtic beat Motherwell at Fir Park 2-0. The victory would come thanks to a superb Commons pass to goal machine and Lennon favourite, Gary Hooper, while an own goal sealed the points.

The first came from a Kris Commons pass that would have been the envy of Andrea Pirlo. After Celtic cleared the ball from a Motherwell attack, Hooper headed neatly into Commons’ path just inside his own side of the field. Hooper then made a fantastic through run towards the Motherwell box, while Commons picked out a magnificent pass which floated all the way from his own half into the feet of Hooper, who’s forward momentum took him all the way to finish off nicely. 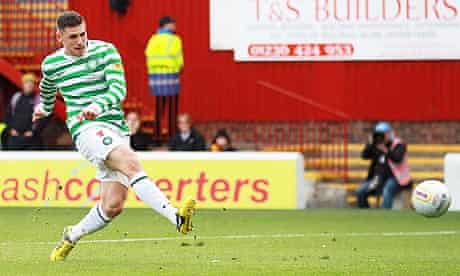 The second was then created by some excellent running from the inexhaustible skipper, Scott Brown. Brown hits the byline with his endless energy to cut a fizzing shot back across the face of goal which left the defender no chance in trying to clear. The ball found the back of the net and Celtic enjoyed another great result in North Lanarkshire.

Have a look at the goals below…

Hooper and an own goal. @HOOP588 pic.twitter.com/IETwwOmtrq