You are at:Home»Latest»On This Day: Celtic seal 7IAR by hammering Rangers 5-0

On This Day in 2018, Brendan Rodgers’ Celtic set out to win the league with Rangers in their way. A win would seal it and Celtic would answer this call and some, hammering the Ibrox side 5-0. After defeat to Neil Lennon’s Hibs at Easter Road the week before, Celtic could seal 7-in-a-row with a win over Graeme Murty’s hapless Rangers at Celtic Park. Two weeks before the game, Celtic had won 4-0 at Hampden and from kick-off in Paradise, Celtic looked like they were keen to improve on that scoreline.

Such was Celtic’s dominance that the supporters were left asking why did we only score five. Seven was there for the taking and only some remarkable misses,  great saves from Alnwick in their goals and Celtic dropping down the gears towards the end saved their skins.

Edouard made it 1-0 when he met a Tierney cross and put it beyond Alnwick. It was 2-0 soon after when James Forrest played the Frenchman through, who beat two men and fired his shot into the corner. Pandemonium in the stands.

Celtic were hunting in packs and the hapless Rangers couldn’t get out their own half for love nor money. James Forrest scored the third – his first in the fixture after skinning three away players after Boyata won a 50/50 with Cummings. Celtic were up for it. 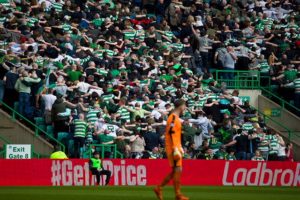 We asked Celtic to go for their throats and the side did that and some more. All over the park Celtic had heroes. At the back Boyata and Lustig were excellent, Tierney was too busy impressing as an attacker and he put the opener on a plate for Odsonne Edouard.

In midfield Broony bossed the game as usual but he was surrounded by Celtic Stars. Tom Rogic strolled it, as per. Callum McGregor, so long an unsung hero, was also outstanding. Both players got their usual ‘Skelping goal early in the second half to make it 4 then 5 nil. 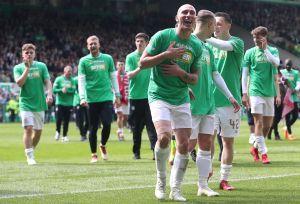 One player experiencing that for the first time was a James Forrest who terrorised Andy Halliday down the right and made it 3-0 just before the interval.

And of course the two French Bhoys were oh la la outstanding. Missing big Moussa who has a problem with his back, Edouard got the nod and let no-one down. The young French striker grabbed his opportunity to start to score two wonderful goals and just like Dembele  did at Hampden he bullied their lightweight defence all afternoon.

If it had been 10, no one would have complained. Celtic were brilliant and imposed themselves on the game so much so that they even took the foot off the gas in the closing stages.