You are at:Home»Celtic on This Day»On This Day: Celtic sign Virgil Van Dijk

On This Day in 2013, Celtic announced the signing of unknown Dutch central defender Virgil Van Dijk. The Dutchman has since gone on to be one of the best defenders in world football winning the Premier League and Champions League with Liverpool.

Van Dijk won two Premiership titles in Glasgow, as well as the League Cup under Ronny Deila but he also played European football, Champions League group stages in 2013 and Europa League Last 32 the following year. A £12m move to Southampton followed and two years after that, Van Dijk became the most expensive defender in the world after a £75m move to Jurgen Klopp’s Liverpool.

Van Dijk spoke to Sky Sports in 2020 about making the step from Groningen to Celtic, exposing him to a new culture, a new language and a new type of expectation.

“Moving to Celtic was a little bit similar to the step I took from Willem II to Groningen. Willem II is in the south of Holland, Groningen is in the north, so it was a totally different environment with a different language.

“Then there’s the Scottish Premiership. It isn’t the hardest in the world but it’s a league where everyone expects you to win and that was something new for me to deal with because Willem II and Groningen were never teams people expected to win.” 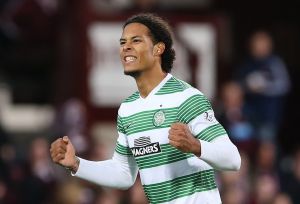 The move to Glasgow gave Van Dijk the pressure of being expected to win every game, something that he credits as making him a winner.

“Winning championships was something I hadn’t experienced before at a young age and it made me a winner. It was very important for my development to go there.”

The Dutchman was revered during his time in Glasgow and many supporters could see how good a player he was, meaning that his ascent to Champions League winner was not surprising.