You are at:Home»Latest»On This Day: European Edition, We Shall Remember

Ahead of Celtic’s trip to Lazio on Thursday, we look at On This Day: 5 November.

The first involves the first time Celtic ever wore numbers on the back of their Hoops, coming in a fixture versus Boavista.

“After the kind of opening that teams in Europe only dream about, Celtic ended on the tight-rope of a single goal lead. They stayed there from the 36th minute, when Boavista scored their only goal through their Brazilian star Mane, until the 85th minute when Dixie deans ended the pressure with a killer goal.

“Up to then Celtic had all the play – Deans and Dalglish had both hit the post, but somehow they were left defending a one-goal lead – knowing that another away goal for the Portuguese meant that they had tumbled out of Europe. It meant a second half of tension which should never have been, for Celtic were ahead of Boavista in almost every aspect of the game. They did what they set out to do. they pushed men forward into attack and they looked for goals – and goals came. 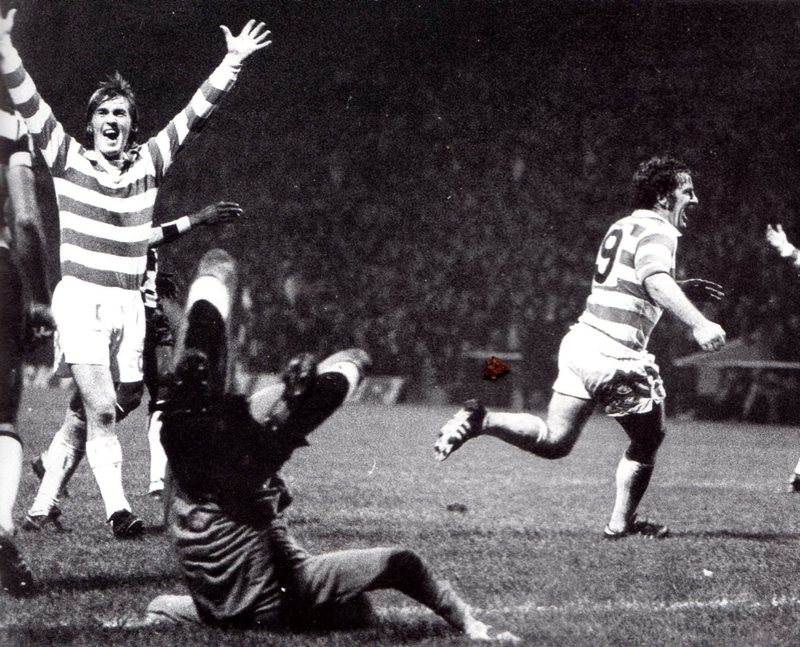 “In 35 seconds Dalglish scored the first with a half-hearted try from the left. Portuguese goalkeeper Botelho went for the ball, fumbled it and then allowed it to drop over the line.

“In 20 minutes Barbosa joined him with a mistake which allowed Celtic to score their second goal, Andy Lynch sent in a free kick, Barbosa miss-hit his clearance and Edvaldsson was there to hammer in a low shot.

“But in 36 minutes the game changed. Mane fastened on to a ball 20 yards from goal and blasted a shot past Peter Latchford. It was the first goal Latchford had lost in Europe.

“At the start of the second half Zezinho replaced Acacio as they realised that the game was finely balanced once again. Celtic were still in control – but they had to show caution, and also they showed fear. 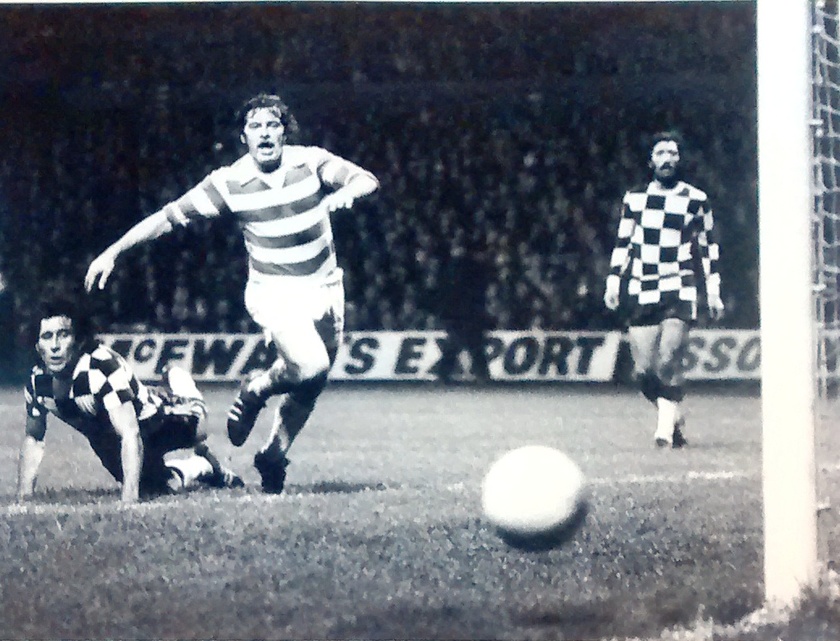 “Then, with just five minutes left, Dixie Deans grabbed the goal which mattered. Dalglish sent him away on the right. He looked offside but went on to the ball confidently and, as the keeper came out, lofted it over him and into the net. Botelho protested wildly, raced to the linesman and was booked. He was the second Portuguese player to be cautioned. Goal-scorer Mane was also booked for a foul on Danny McGrain in 50 minutes.

“It was a good result for Celtic. They did what they had to do and with some luck could have dine it with a lot more to spare.

“Dalglish was the star and young McCluskey looked as promising as he had in his debut on Saturday and was now getting plaudits as an up and coming star.”

From the Celtic Wiki.

First time Celtic wore numbers on the back of the hoops. pic.twitter.com/BPvu30V2Av

“Celtic got off to a wonderful start with goals from Henrik Larsson and Liam Miller inside 17 minutes. Chris Sutton added another goal before the half hour as the Belgians buckled under Celtic’s pressure.

“Didier Agathe, playing in a full-back role, linked with John Hartson and delivered a wonderful cross for the prolific Swede to nod home from six yards. 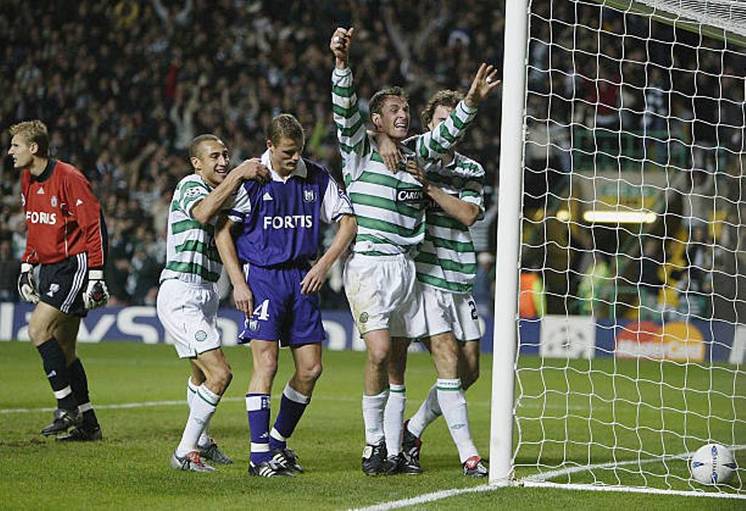 “Within five minutes the Celtic had doubled their advantage when a long ball from Jackie McNamara was headed into the path of Miller by Hartson and the young Irishman hammered an angled shot into the net from 10 yards.

“With 29 minutes gone the Anderlecht keeper was beaten again when Hartson flicked on Petrov’s corner at the near post and Sutton flew in to head the ball home from a central position.

“In the 75th minute, the speedy Aruna had his heels clipped by Bobo Balde in the penalty area. Magnus Hedman saved Ivica Mornar’s weak spot kick and the Celtic keeper managed to block Christian Wilhelmsson’s follow up but Aruna was on hand to lash the ball high into the net.”

The Champions of Europe, Manchester United arrived in Glasgow expecting to pick up 3 straight forward points; however an ecstatic, noisy crowd met them in Glasgow East End. Cristiano Ronaldo, Wayne Rooney, Teves and Giggs featured for the English side. Although the Celtic Park faithful were buoyed on by Scott McDonald’s 13th minute goal. 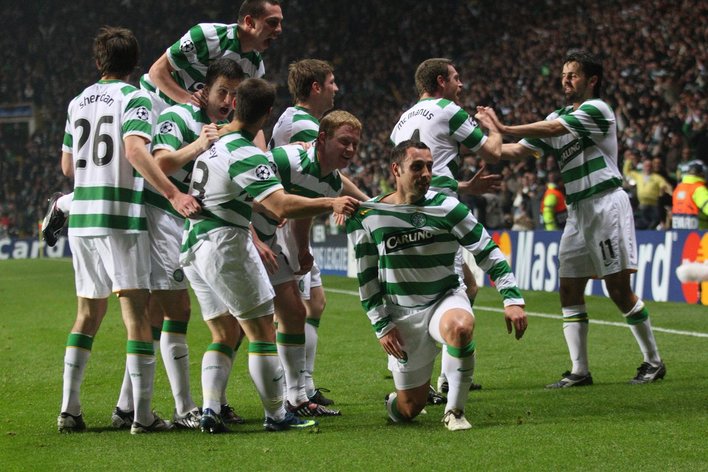 Although it all came undone when Cristiano Ronaldo hit a speculative 25 yard strike, which Artur Boruc couldn’t grasp, allowing the following up Ryan Giggs an open goal. The goal may have broken the resolve of Celtic, but a point to take back to Old Trafford for Sir Alex Ferguson was probably a fair reflection given the attacks that the Reds subjected Gordon Strachan’s side to.