You are at:Home»Latest»On This Day: Invincibles, Lennon’s first silverware and ten men win the league

THERE is not a lot of football being played right now across the world as Coronavirus takes hold – except Belarus, where vodka and saunas are meant to keep the virus at bay. However, thanks to @Lilze85 on Twitter, we can take a trip down memory lane and look at some of Celtic’s goals on this day.

Brendan Rodgers’ side beat Hearts 2-0 to complete the league season without losing a single game, becoming Invincibles. A full stadium display celebrated the Lisbon Lions’ famous day in Lisbon back in 1967 on the final league match of the season. Goals from Leigh Griffiths and Stuart Armstrong sealed the win on Trophy Day in Paradise.

Neil Lennon won his first trophy as Celtic manager with a 3-0 win at Hampden over Motherwell. After what had been a brilliant season, albeit disappointing to have lost the league by a point as well as defeat in the League Cup final, Celtic were rewarded with silverware.

Ki Sung-Yeung scored a screamer to open the scoring at Hampden. Craigan’s own goal with 15 minutes remaining seemed to settle the debate before a late free-kick from Charlie Mulgrew sealed the Scottish Cup for Celtic.

the famous 4-2 win over Rangers in 1979. A dramatic night in Paradise as it was winner takes all for Celtic and Rangers would be content with a draw. This was a postponed game from New Year after one of the worst winters on record.

An early Rangers goal setback Billy McNeill’s side before Johnny Doyle was sent off early in the second half. The ten men rallied with goals from Aitken and McCluskey fired Celtic into the lead. However the joy was short-lived as Russell equalised for Rangers from a corner.

Celtic pushed forward, driven on by Aitken, and unbelievably a McCluskey cross caused panic in the Rangers defence resulting in Colin Jackson knocking the ball into the net.

With Rangers pushing for an equaliser, Celtic broke up the park and Murdo Macleod scored the goal of his career, firing a shot into the postage stamp – sealing the win for Celtic. That night, the Jungle and the Celtic end were filled of Championship winning huddles. 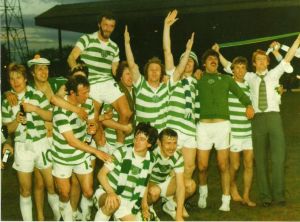 Aitken, McCluskey, an own goal and Murdo with the goals. @murdomacleod06 pic.twitter.com/YcRVplw9Ox