You are at:Home»Celtic on This Day»On This Day: Lubo and Larsson stun Ibrox – Rangers 0 Celtic 3

Celtic travelled to Ibrox for the final Glasgow Derby of the 2000/01 season with the league already won. Martin O’Neill’s side had lost 5-1 in the first outing at Ibrox earlier in the year but there would be no repeat on this day.

In what was a quiet first half, Celtic barely threatened the goal despite the usual tension of a game at Ibrox. Celtic were calm on the ball and limited the chances of their rivals – with Barry Ferguson’s effort around the 20 minute mark the only notable chance of the first half.

An hour into the game and Lubo Moravcik seized the initiative, taking a pass from Larsson and slotting away to send the Free Broomloan wild. 15 minutes later and Lubo had Celtic’s second. Taking the ball down the left hand side, checking back inside and leaving Ricksen wrong footed as he slammed the bat into the net. 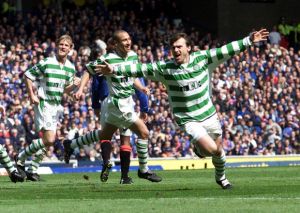 Celtic’s day got even better when Henrik Larsson rounded the keeper before somehow scoring for an impossible angle. It would be the King’s 50th goal of the season and what a goal it was.

It was the first win at Ibrox in six-and-a-half years and shortly after the game at Ibrox, O’Neill’s Celtic would register a domestic treble after beating Hibs at Hampden.

Stevie Chalmers – that gentleman of Lisbon | The Celtic Star https://t.co/DMwoBXbOGw