You are at:Home»Latest»On This Day: The Funeral Of Michael Davitt

On this day, 2 June 1906, the remains of Michael Davitt departed Dublin by train and eventually arrived at Foxford railway station. Huge crowds had appeared on the platforms of stations all along the route. In the fields, between stations, farm families stopped working, pointed at the train and blessed themselves. The hearse, which was drawn by four black horses, slowly made its way from Foxford to the village of Straide. Local people lined the route in order to catch a glimpse of the coffin and pay their respects to one of their own. There was a delay of some minutes on arrival at the cemetery and then Michael Davitt’s body was borne aloft and carried to the family plot to be interred with his relatives in the sacred soil of Straide (Co Mayo). 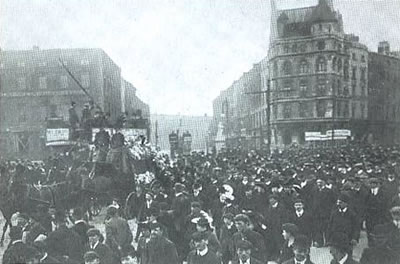 Davitt was a great friend of Celtic, the Glasgow Irish and the Highland crofters. He was named Celtic’s first patron and was invited to lay the first sod of turf, imported from Donegal, at Celtic Park in 1892.

You can read more about his life and Celtic connections in this article, which The Celtic Star published a few days ago.

Meanwhile, the ballad of Michael Davitt, which pays tribute to the working class hero and Irish patriot that he was, can be heard in the video below:

Previous ArticleMartin O’Neill On A Relationship That Took Neil Lennon from A Hovel In Crewe To 9 In A Row As Celtic Boss
Next Article Video: Dennistoun No1 CSC Piling On The Agony