You are at:Home»Latest»On This Day: Tony Watt wrongly flagged offside as Celtic draw in Dingwall and Burns scores at Tynecastle

There are two games to recall On This Day in the illustrious, unbroken history of Celtic Football Club. This date features two draws, one at Tynecastle and the other in Dingwall, with the latter featuring an honest mistake by the officials. Thanks to LilZe on Twitter, we are able to keep an eye on them as they come up.

Champions Celtic travelled to the Highlands to face County as the season entered its penultimate weekend. Neil Lennon made a number of changes with trophy day and the Scottish Cup Final with Hibs in mind and there resulting starting XI dominated, even if they didn’t have much to show for their efforts barring an early Anthony Stokes goal.

Iain Vigurs found the top corner from 20 yards following a set piece to restore parity before half time. Tony Watt thought he had nudged Celtic ahead after Efe Ambrose sprung an attack but the linesman wrongly flagged the young striker as being off. 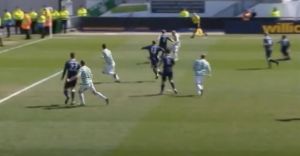 Celtic had chances to win the game but spurned them as the game finished up as a draw.

Elsewhere, Tommy Burns scored as Celtic drew at Tynecastle. Davie Hay’s side, who were second in the table to Alex Ferguson’s Aberdeen, came up against a spirited Hearts, who were battling for their place in the UEFA Cup.