ON THIS DAY in 1989 the Hillsborough Memorial Match took place at Celtic Park between Celtic and a grieving Liverpool. It was the first time since the tragedy in the FA Cup semi-final that the Anfield side played and it was an incredibly emotional affair between the two sides.

It was not a day for footballing talent but instead for the communities of Celtic and Liverpool to mourn the deaths of 96 Liverpool supporters, who had been killed unlawfully while trying to watch their team. Celtic organised the match in order to raise funds for those effected by the traumatic events in Sheffield. It is thought that the game raised in excess of £500k.

It was 4-0 to Liverpool but the match was more about solidarity to the city of Liverpool and those that were grieving. ‘You’ll Never Walk Alone’ was sang at full time as well as well over 60,000 Celtic fans chanting ‘LIVERPOOL’. 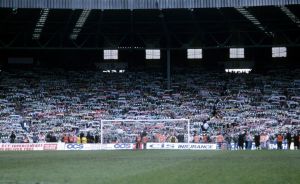 On 15 April , Liverpool were to play Nottingham Forest at Sheffield Wednesday’s Hillsborough stadium. The game was highly anticipated and thousands made the trip in the hope to secure a ticket. To ease pressure on turnstiles, match commander David Duckenfield ordered a gate to be opened allowing a further 5000 supporters to enter the ground. Instead of being told to avoid pen 3 and 4, which were already over capacity, officers and stewards stood idly by as supporters entered the ground – not knowing the strain it was causing at the front.

By 3.05pm, the Police realised what was happening and Police Superintendent Greenwood entered the field to tell the referee to stop. While this was happening, supporters were being forced to climb the perimeter fence or fashion holes to escape the crush. Those that managed to get out then helped save others, helping them over the fence or cutting openings in the fence for them. The supporters gave CPR, operated makeshift stretchers from advertising boards as they attempted to save lives. The match commander had failed to declare a major incident, which delayed the response of ambulance staff and further police aid.

The disaster stands as one of the biggest miscarriages of justice in recent times with the blame being levelled at supporters, who were just trying to watch their team. Subsequent investigations refused to admit that 96 people had been unlawfully killed.

The Hillsborough disaster sparked the Taylor Report in 1990, which found the main reason for the disaster was the failure of police control. Placing an inference that the supporters had caused the issues that resulted in the crush. The report also recommended that all major stadiums be converted to all-seater venues. Whilst, they stated that standing itself wasn’t ‘intrinsically unsafe’; the Conservative government said it wasn’t to be allowed at all.

However, in 2012, Justice prevailed and the Hillsborough Independent Panel concluded that the Liverpool support were in no way responsible for the disaster and the sole cause of the disaster was lack of police control.

In April 2016, it was determined by an inquest that the 96 Liverpool FC supporters had been unlawfully killed that day in 1989. It was match commander David Duckenfield of South Yorkshire police had failed in his duty of care and should be held responsible for his actions – which included: allowing overcrowding, delay in declaring an emergency and failures of police command.