You are at:Home»Latest»Opinion: Celtic should steal Postecoglou favourite from under Arsenal’s noses

Celtic should target Brighton’s Mathew Ryan as they look to address the need for a number one goalkeeper at the club. Supporters are rightfully panicking as the new season nears with no manager and no Director of Football announced yet. However, with Ange Postecoglou close to being announced as boss, one position that he will know requires immediate attention from the Australian is the goalkeeping position. £4.5m acquisition from AEK Athens, Vasilis Barkas, failed to impress and was soon deputising for Scott Bain then Conor Hazard, two players that struggled for appearances on the bench the season before. Barkas will be hoping for another shot at redemption under the new manager but Postecoglou could seek a move for one of his old favourites in between the sticks, Mat Ryan.

Arsenal had Ryan on loan during the second half of last season and are weighing up whether to sign the player on a permanent basis. However, this could depend on whether André Onana receives a reprieve from his twelve-month suspension from playing.

Brighton have already signalled their intent to sell the goalkeeper, who has just one year remaining on his contract with The Seagulls, so that could potentially open the door for Ange Postecoglou signing his former favourite. Celtic have struggled between the sticks this season with none of Barkas, Bain or Hazard impressing. Barkas may yet be afforded an opportunity to make himself the club’s No.1 but due to Arsenal’s dithering, Celtic might be able to sign Ryan.

Arsenal are said to be discussing a move for Ryan (as per Daily Express’ Ryan Taylor); however, James McNicholas of The Athletic says that Mikel Arteta may look at signing a homegrown number two goalkeeper with reported Celtic target Freddie Woodman a target. 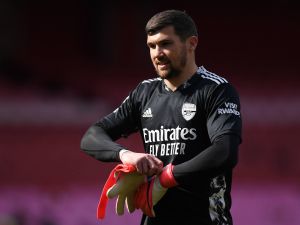 Postecoglou and Ryan worked together for the Socceroos, which lead to Ryan winning ‘keeper of the tournament at the 2015 Asia Cup. The 29-year-old was said to be avaliable for £5m and this might be seen as shrewd business for the ex-Valencia goalie.

Speaking in 2017, Ryan praised Postecoglou and said that he hoped he remained as Socceroos manager.

“I’ve always loved Ange’s approach, the way he doesn’t see Australia as an underdog and how he asks the question, ‘Why can’t Australia do great things in the football world?’

“I agree with him. That’s how you’ve got to be. That’s the right attitude.”

The incoming manager will likely want to have players that he can trust and the goalkeeper position is one of enormous trust. Neil Lennon epitomised this in 2019 by signing Fraser Forster and he made some big saves. It was the insistence that Forster was coming back that lead to Craig Gordon leaving.

Ryan is going to be available for a reduced fee and he is clearly someone that Ange rates. At his stage in his career he will likely fancy first team football after Brighton’s snub and if Arsenal do not elect to sign him, a move to Glasgow might suit him.

Previous ArticleOlivier Ntcham to arrive at club ahead of contract talks, according to report
Next Article Celtic reportedly considering 31-year-old attacker on free transfer