Celtic should target EFL League One striker Jonson Clarke-Harris and avoid repeating the mistakes of a year ago when seeking a prolific attacker in the transfer market.

Last summer, Celtic targeted Peterborough’s star striker Ivan Toney but ultimately opted against signing him as the hitman transferred to Brentford. Since his move, he has been a revelation whilst the man Celtic decided to go with, Albian Ajeti, has struggled in Glasgow.

Odsonne Edouard is expected to leave the club this summer, leaving a colossal void in the terms of quality but importantly – goals. This year, Celtic should avoid repeating history and successfully acquire Peterborough’s Jonson Clarke-Harris.

Clarke-Harris scored 31 goals last season as Posh won promotion to the Championship. The player appears to be a classic No.9 and less inclined that someone like Odsonne Edouard to get involved in the build-up play, but given Celtic’s poor finishing, some of the positions that Clarke-Harris found himself in are encouraging. 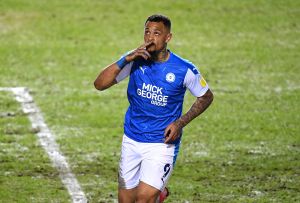 The Leicester-born attacker has three years left on his deal with Peterborough; however, chairman of the London Road outfit, Darragh MacAnthony said to Sky Sports that his side cannot compete with some of the wages on offer at other clubs, meaning he may be forced to sell his star striker.

“Peterborough United can never pay players £25,000-30,000 a week, there will be seven or eight clubs already offering Jonson Clarke-Harris that kind of money.

“We’re not going to be selling a lot of our assets, but you always have one player that so many clubs are after, they’re going to tap them up which is normal, par for the course and it’s difficult to compete with that.

“He’s been fantastic, the best player in League One, the best goalscorer in England.”

The left-footed striker turns 27 this summer and may be thinking that European football and playing for trophies may be something that he wants to do instead of battling for his place in The Championship.

The player has previously been linked with Sheffield United, Sunderland as well as Rangers. However, given Celtic’s need to sign a prolific goalscorer, they should look at avoiding a repeat of the Toney incident and run the rule over Clarke-Harris ahead of a summer of interest in the Englishman that won League One Player of the Year.

Previous ArticleArsenal eye £25m move for Moussa Dembele as Celtic await sell-on fee
Next Article McGregor on Turnbull: “As a No.10 you are judged on goals and assists – and his numbers are pretty good”