AEK Athens, Cluj, Ferencvaros and now Midtjylland. Celtic have arrived at the Champions League Qualifiers with threadbare squads, makeshift defences, a lack of investment and wantaway players. Now, we can look back at four consecutive failures in qualification attempts at the Champions League. The prestige and financial rewards of the top European competition have long since been at the top of the club’s aims but once again, the club have fallen short after putting out a weak team for a crucial game. The manager is blameless in this regard, he can be held accountable for game management and subs, whom he appeared reluctant to call upon. However, the two people that should shoulder the blame are Dermot Desmond and Peter Lawwell.

The defeat and constant lack of preparation lie with major shareholder Dermot Desmond and former CEO Peter Lawwell. In November, Celtic were beaten back to back by Sparta Prague, the defeat to Ross County in the League Cup sparked fan protests but Lennon was retained and given the shot to regain form and win the Quadruple Treble. Celtic limped to a win on penalties over a Championship Hearts outfit. 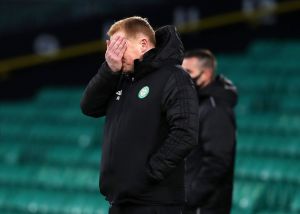 In January, Celtic were beaten at Celtic Park by St Mirren and it appeared obvious that the league was over. Neil Lennon should have walked and the new regime should have been put in place. Alas, no. Lennon was retained until late February and by that point, the league was gone and the cracks were opening for all to see. Edouard wanted out, the goalkeepers were not good enough, summer signings Ajeti, Laxalt and Duffy flopped. Celtic’s dismal season ended with all three trophies being relinquished.

A back five of Scott Bain, Anthony Ralston, Dane Murray, Stephen Welsh and Greg Taylor started tonight, with Taylor being replaced by Adam Montgomery. This was the backline for a crucial Champions League qualifier that Celtic knew would be coming back in January. Instead of sacking Lennon and bringing in an interim while the January review took place. Dominic McKay is not accountable, nor is Ange Postecoglou. Dermot Desmond and Peter Lawwell are responsible for this disaster. They refused to sack Lennon, they pursued Eddie Howe but as the weeks turned into months, it was evident that Howe wasn’t coming. McKay appointed Postecoglou a matter of weeks ago, inheriting the mess of the year before. 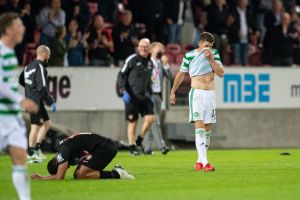 The Australian manager has inherited a mess, he has left both of these games with chances to have the game won but individual errors have hampered this. In truth, the Europa League is probably Celtic’s level at the moment. The supporters deserve better but the truth is, the board have allowed the lack of preparation to become common practice. For this, Dom McKay must bankroll Postecoglou to ensure that targets are acquired before Friday’s deadline.

The season is not over, it is just an early blow for the club as it was so avoidable. Postecoglou and McKay must use this defeat as their defining moment, not to let it happen again. Not to let a league campaign arrive with no apparent structure to the side and have a cluster of wantaway players pulling in their own direction. Celtic cannot let this defeat define our season and push on. There is Europa League Football to achieve as well as three trophies to win back.

Previous Article“What we can never forgive in a Celtic jersey is lack of effort and energy,” David Potter
Next Article Video: Postecoglou Clashes with BBC Journalist, his Celtic TV interview and Erik Sviatchenko’s release clause