You are at:Home»Latest»Opinion: James McCarthy – the experienced head that would improve Celtic’s midfield

James McCarthy is once again the talk of social media linking the Ireland Internationalist with a free transfer to Glasgow’s East End. The midfielder is a free transfer and would certainly improve Celtic’s midfield if a deal can be done to bring him to the club.

Stephen McGowan said that Celtic wanted another holding midfielder with Ismaila Soro failing to really make the position at the base of the Celtic midfield his own. Talk relating to a move for Aaron Mooy has cooled and with Celtic needing to get some players in the door, a move for McCarthy is a no-brainer. The Parkhead club have often been linked with the former Everton and Wigan midfielder coming through the Celtic Academy before joining Hamilton Accies. 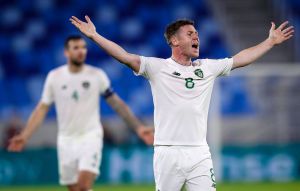 Celtic could see McCarthy as a successor to Scott Brown in the middle of the park, aiding captain Callum McGregor and helping to fill the vacuum left by Brown. McCarthy brings a blend of experience and pedigree that could make him an important player for seasons to come.

The 30-year-old has made 271 Premier League appearances, scoring 13 goals and assisting 16 times. The player struggled for game time last year, making just sixteen appearances for Palace but given Roy Hodgson was departing, the player was not offered a new deal with Palace leaving him free to join Celtic.

Celtic need to be shrewd with their business, signing players that would make an instant impact on the team and the boyhood Celtic fan would bring that. Soro has struggled to impose himself on the Celtic first team and a holding midfielder like McCarthy would be the ideal candidate to offer stability to Ange Postecoglou’s midfield.

Postecoglou has added Liel Abada (RW), Osaze Urhoghide (CB) and Kyogo Furuhashi (ST) with Starfelt (CB) also agreeing to join Celtic. Liam Shaw (CDM) arrived on a pre-contract but it appears as he is a player for the future as opposed to a ready-made first team player. Another CB, a RB, a goalkeeper and a winger are desirable before the window closes as the club need to get the standard of the first team up to that required of title favourites.

Previous ArticleCeltic to demand loan fee for Vasilis Barkas, according to Greek journalist
Next Article Hearts v Celtic – team news, kick-off time and where to watch