You are at:Home»Latest»Opinion: Long term Celtic target is the perfect replacement for departing Scott Brown

With the news that Scott Brown is leaving Celtic, there will be a new look to Celtic next season. Dominic McKay will be in charge as Chief Executive, there will be a new manager and a head of recruitment/Director of Football. However, Brown will be an enormous loss. For fourteen years he has bossed Celtic on the park and in the changing room, his value to the club is immense but given all he has given the club, he is able to decide his own future.

Celtic will need to replace the quality, determination and leadership of Brown with someone that can lead a young, transitioning team. Someone that knows the club and wants to succeed, someone like James McCarthy, a long term target of the club.

The former Hamilton and Wigan midfielder grew up a Celtic supporter and has been linked a number of times in his career. However, with his deal expiring with The Premier League side, the club could look to sanction a move to bring the Ireland International back to Scotland. 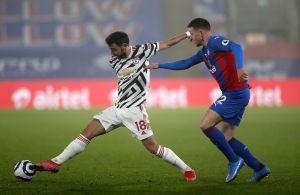 McCarthy has struggled with injuries in recent years, he will feel that he has missed a chunk of his ‘best years’ due to the sickening leg break he suffered at Everton. Although, Celtic would allow him the chance of European football and competing for trophies, something he has not been able to do for over a decade.

There is likely to be an enormous overhaul of players at the club with loanees as well as prize assets exiting therefore experience is needed and who better than McCarthy. The 30-year-old has made 268 Premier League appearances, scoring 13 goals and assisting 16 times. The player has struggled for game time this year, making just fourteen appearances for Palace and he is expected to find out if he will be offered new terms by Palace.

McCarthy will likely be looking to force his way into the Palace tea before looking for a new team. However, with the transition at Celtic right now, the club should look to secure a player that has both experience but also the quality to improve our team.

Ultimately it will be a decision for the new manager and if he thinks that he can build his team around someone like McCarthy. But in terms of finding a player that wants to play for Celtic and can improve us, McCarthy could certainly be that.