You are at:Home»Latest»Our Celtic Family remembers Walter Smith for this above all else. Many he rest in peace

The terribly sad news this morning is that former Rangers and Scotland manager Walter Smith has passed away. The Ibrox club has now confirmed the sad news on their media channels and at this sad time the thoughts and prayers of the entire Celtic family will be with Walter’s family.

Walter Smith the Scotland manager shares a joke with assistant Tommy Burns during the group 5 World Cup 2006 Qualifier between Norway and Scotland held at the Ullevaal Stadium on September 7, 2005 Oslo, Norway. (Photo by Richard Heathcote/Getty Images)

There can be no doubt that Walter Smith was a outstanding manager for Rangers, indeed hindsight tells you that he was far better than Graeme Souness who left Ibrox to take over at Liverpool, without much success it should be noted. Smith benefited from managing Rangers when Celtic’s internal troubles meant that we were unable to offer much in terms of title challenges for many years and it took an overthrow of the old board, the arrival of Fergus McCann, a brilliant team – often hammered by honest mistakes – under Tommy Burns coming close but ultimately failing – and then finally the arrival of Wim Jansen to stop Walter Smith reaching Ten in a Row. 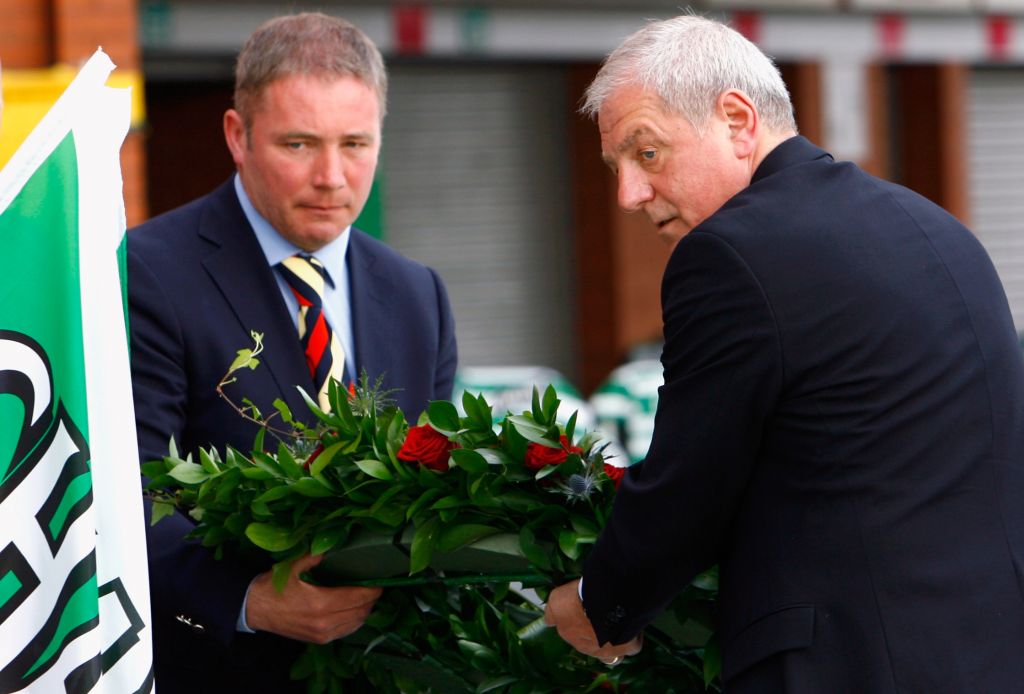 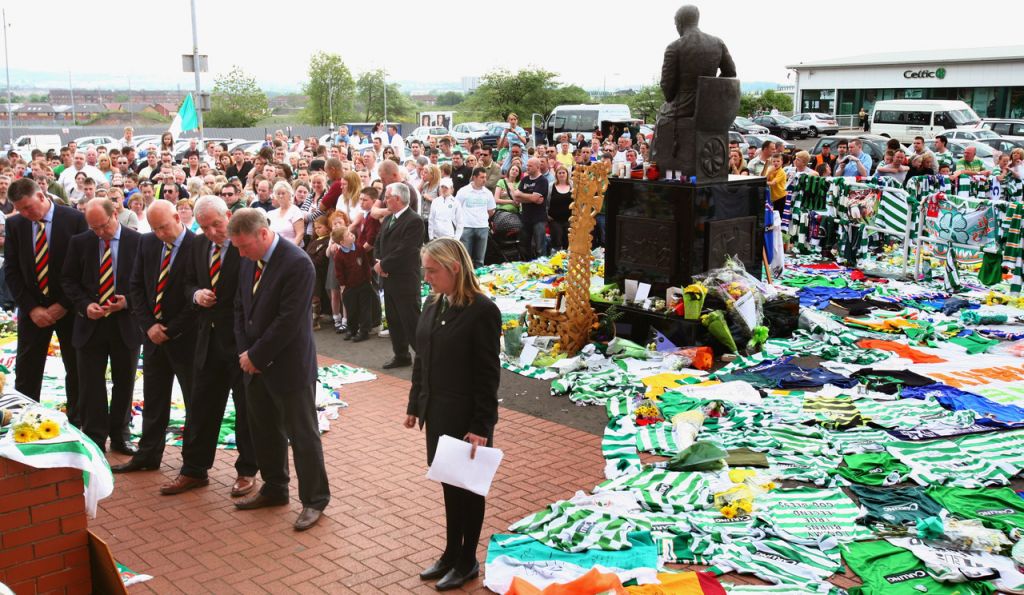 Earlier this year Neil Lennon tried and failed to achieve that and before Walter Smith’s attempt in 1997-98 season Jock Stein had also failed to reach that target, which really only is about bragging rights in a city obsessed with football. No-one else in the wider footballing world really cares.

Walter Smith realised just how impressive Tommy Burns was during their time in opposing dug-outs at this drama was all unfolding and had no hesitation in bringing the Celtic legend into his staff when he took over the Scotland job. The two former managers worked alongside Ally McCoist who was later the assistant to Smith when he returned to Ibrox to manager Rangers for a second stint and McCoist was also the first manager of the successor club after Rangers was liquidated in 2012. 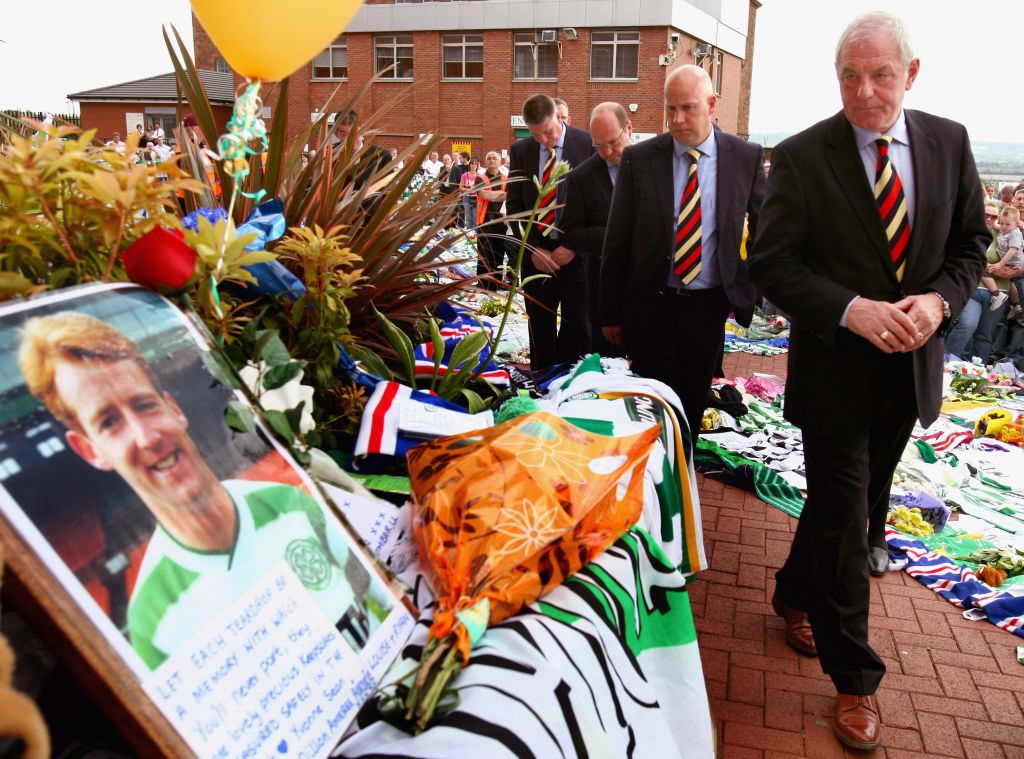 Smith and McCoist set aside their rivalry to work with Tommy Burns and all three became great friends, no doubt indulging in banter as the results went in favour of one team or the other. When Tommy passed away both Rangers men where there and were pallbearers at Tommy’s funeral.

Scottish football has lost a great character but before anyone comments, children have lost a father, grandfather and much more. RIP Walter Smith 💚💙 I’ll never forget how he carried Tommy Burns. pic.twitter.com/T9PQ1jdvHn

This more than anything else is what many Celtic Fans will remember Walter Smith for. Many he rest in peace.

It is with profound sadness that we announce the passing of our former manager, chairman and club legend, Walter Smith.https://t.co/5VJn3JeqbV pic.twitter.com/E2GMYjr8fN

We are deeply saddened to learn of the passing of the former Scotland national coach, and one of the most successful managers in Scottish football history, Walter Smith.

The thoughts of everyone at the Scottish FA are with his friends and family at this time. pic.twitter.com/CP2TzXLm51

In a city where tribal rivalries run deep Walter Smith treated others with a level of decency, courtesy and humanity too rare in the modern-day game.https://t.co/Ajkcqqh3Pj via @MailSport

A club rival no doubt, but also a dignified and respected football icon. Thoughts go out to his family, friends and blue half of the city 🏴󠁧󠁢󠁳󠁣󠁴󠁿 https://t.co/TKl2KoqUPj

Everyone at St Johnstone’s thoughts are with the friends and family of Walter Smith during this sad time.

Walter was a great manager for both club and country and will be a great loss to the game💙🤍 https://t.co/Q69uCckcyK

RIP Walter Smith.. Walter and wife Ethel used to attend my Charity Ball every year and was a great fun .. thoughts are with Ethel and the Smith family and friends 🙏🏻

Dundee United is deeply saddened to hear of the passing of former player, coach, assistant manager, and board member Walter Smith.#UnitedTogetherhttps://t.co/kPbxs4kEto

Walter was a tremendous servant to Scottish football and everyone at #CelticFC sends their heartfelt condolences.

Previous ArticleHenrik Larsson’s emotional tribute to Wim Jansen, the Dutchman who gave him Celtic
Next Article Walter Smith and the Celtic shorts at a Dundee Utd training session