The summer of 1978 was a time of huge change at Celtic Park. As predicted, the legend who was Jock Stein was replaced as the manager of Celtic by his long-time, on-field lieutenant, Billy McNeill.

Out went Jock’s assistants, lifelong Celt Sean Fallon and former Thistle supremo, David McParland, who had masterminded their 1971 League Cup Final triumph over Jock’s Celtic, with physio Bob Rooney remaining to provide some degree of continuity. Billy’s new management team included John Clark, who having played by his side throughout a trophy-laden career in the Hoops, would now continue to be his right-hand man in the dugout. 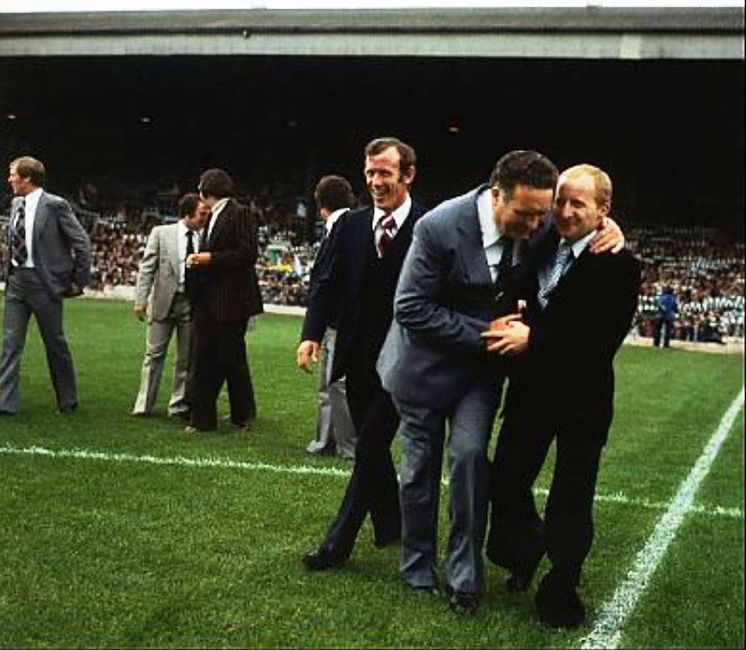 But whilst the managerial change had been widely expected, the treatment of Jock fell well short of that deserving of such a faithful servant. Rather than taking a place in the boardroom, to provide insight and guidance for the new era, Jock was offered a role promoting Celtic Pools, an offer he felt well able to refuse.

I recall a memorable photograph, which pretty much summed up the ‘deal’ at the time for many of us, Desmond White linking hands with Billy, whilst Jock looked on, already pushed into the background.

There would be a last hurrah for the big man in August, when Liverpool arrived as opponents for his testimonial. The old ground shook, as Jock and his Lions waved to a capacity crowd for what would prove to be their final salute.

As always with Celtic, there was a twist of irony, as Our Kenny, fresh from scoring a European Cup winner at Wembley and jeered from the outset by his jilted lovers, settled the match with a double. Those wounds would partially heal in time, however it would never be the same. 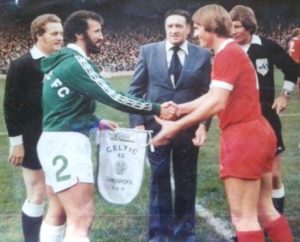 Likewise with Jock, who took up the reins at Elland Road soon afterwards. Leeds, in a mirror-image of Celtic, was a pale, mid-table shadow of the side which had been at the pinnacle of European football just eight years earlier.

As ‘McGrory of the Arsenal’ did not ring true in the time of Maley, neither would ‘Stein of Leeds’. Before the contract ink had fully dried, he would replace the humiliated MacLeod as manager of Scotland, following the shambles of Argentina. It would be his last challenge in football and, tragically, in life, following the events at Ninian Park, Cardiff, in September 1985.

There was little doubt that the season just ended had been disastrous. Nevertheless, for those of us who had only known one Celtic manager, there was anger and huge sadness at the way the great man’s exit had been handled. As Shankly predicted in Lisbon, John Stein is immortal. He will forever be Big Jock, manager of Celtic.

Billy’s second Celtic career had kicked off in the unlikely setting of Links Park, Montrose, for a friendly against the local team. A George McCluskey brace ensured a winning start for McNeill’s Celtic, in a game which, bizarrely, featured new coach Jim Lumsden in the starting line-up.

However, as one career was launched another ended, as Pat Stanton’s attempted comeback in the Hoops, following a year-long battle with injury, ended in disappointment. He would join Alex Ferguson as Assistant Manager at Pittodrie the following month.

The depths plummeted by Celtic in the previous season were clearly illustrated in Billy’s first competitive game as manager. Lisbon must have seemed a lifetime ago, as a tiny crowd gathered at Celtic Park on a Thursday evening, to witness Celtic’s first venture into the Anglo-Scottish Cup, where we faced Craig Brown’s Clyde. It took a late goal from ‘Twists’n’turns’ to save our blushes on the night.

There was actually a larger crowd at Shawfield on the Saturday, for what would prove to be Celtic’s last visit there. A second-half onslaught, featuring doubles for Conn, McAdam and Glavin, saw the Celts through 8-2 on aggregate. 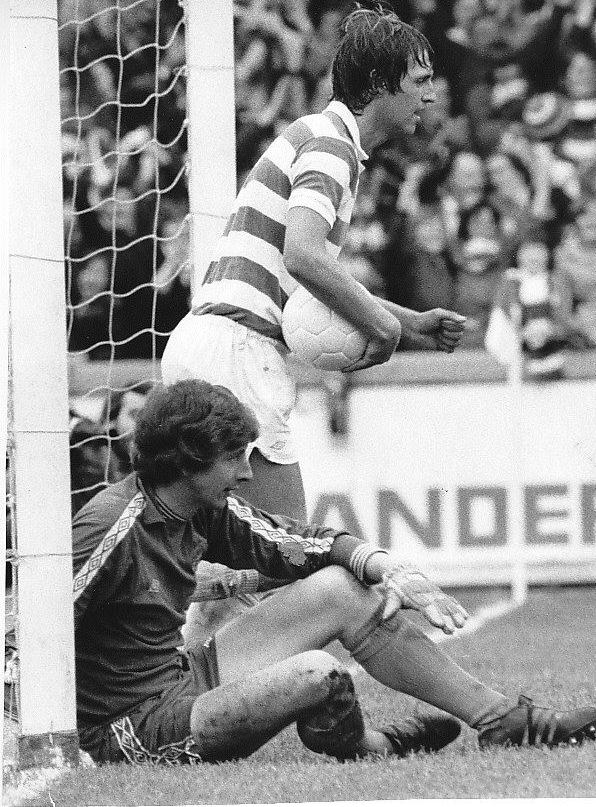 League business commenced at Cappielow, as it would for Billy’s second spell in charge in 1987, with a narrow win, secured despite a late goal from ex-Celt Andy Ritchie. Real momentum was then generated through a busy August, with resounding League victories over Hearts and Motherwell, supplemented by four straight victories over the Dundee clubs, to eliminate both from the League Cup.

The game at Fir Park threw up one of those strange quirks of football fate, when brothers Peter and Dave Latchford kept opposing goals. When Celtic then beat Rangers 3-1 at Parkhead, in the first meeting as managers for old foes McNeill and Greig, the Bhoys sat at the top of the table with a perfect record. It had been a tremendous start for Cesar as the new Boss and he now set about reshaping the team. 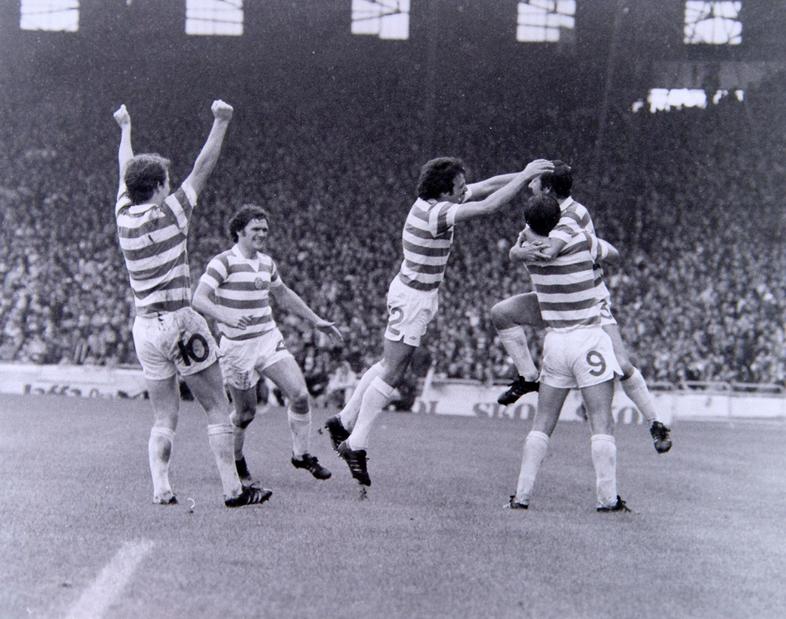 The derby game had been Joe Craig’s last appearance, as he headed for Blackburn to conclude a short but successful spell at Celtic. The previous Saturday had seen a final performance in the Hoops for Quality Street Kid, Paul Wilson, a player subjected to horrendous abuse in 70’s Scotland and who matched his immense talent with courage.

After eight years of first-team service, Paul was bound for Motherwell. Who will ever forget how he played in the 1975 Scottish Cup Final against Airdrie, Billy’s last appearance for Celtic, just days after the loss of his beloved mother, then turned match-winner with a double at Hampden.

Those goals helped Paul towards an unique record, in what would be his finest hour, a season where he outscored both Kenny and Dixie. He became the only player to score in four Hampden finals in the same season, with goals in the Drybrough, League, Scottish and Glasgow Cup triumphs. Born in Bangalore, Paul was the only non-white player to be capped for Scotland in the 20thcentury, in Valencia in 1975, and he was the first Asian footballer to represent any of the home nations at senior level.

Paul’s Celtic debut was my first European game, a 9-0 victory over Finland’s Kokkola in September 1970, when he came on as a second-half substitute and scored twice. I was genuinely saddened to hear of his untimely death last September. 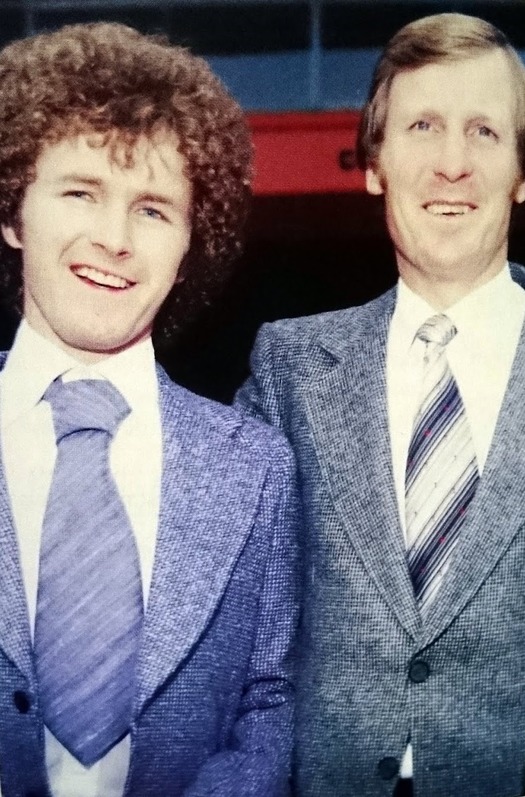 To freshen up the side, Billy turned to young Scottish talent. Kilmarnock winger Davie Provan, who had been a standout against Celtic in the Scottish Cup the previous season, came in for a Scottish record transfer fee of £125,000 in September. He would star for Celtic for the best part of a decade before retiring through illness, eventually turning to a career in media.

Provider of a feast of goals in that period, through his direct wing play and crossing expertise, he also featured in my all-time favourite trick question, as Celtic’s first Spanish player (Juan Davie Provan? OK, I’ll get my coat!).

In early November, midfield powerhouse Murdo MacLeod was signed from Dumbarton for another six-figure fee. Like Provan, he would star in the Hoops until 1987, scoring any number of critical goals with his trademark rocket shot, before leaving the club, in his case to join Borussia Dortmund. He would later play another key role in Celtic’s history, as the right-hand man of Wim Jansen.

Despite these great signings, the remainder of 1978 would prove really disappointing, as the good work of the early season sadly unfolded. Celtic’s only appearance in the Anglo-Scottish Cup ended in shame, on and off the field. Both legs of the quarter-final tie against English Second Division side Burnley, the eventual winners, were lost, amidst disgraceful scenes at Turf Moor.

There were home defeats to Hibernian and twice to bottom side Motherwell – one in the League Cup featuring the return of Paul Wilson to Parkhead – plus dismal draws against Morton, Aberdeen and Dundee United, where only one goal, an Andy Lynch penalty against league leaders United, was scored.

Nervy home wins were ‘enjoyed’ over St Mirren and Bertie Auld’s Partick Thistle, with the Jags providing the only crumb of away comfort in the League before the year-end, on Davie Provan’s debut. Damaging defeats followed at Tannadice, Tynecastle and the new all-seated Pittodrie, as Celtic struggled to maintain a title challenge. 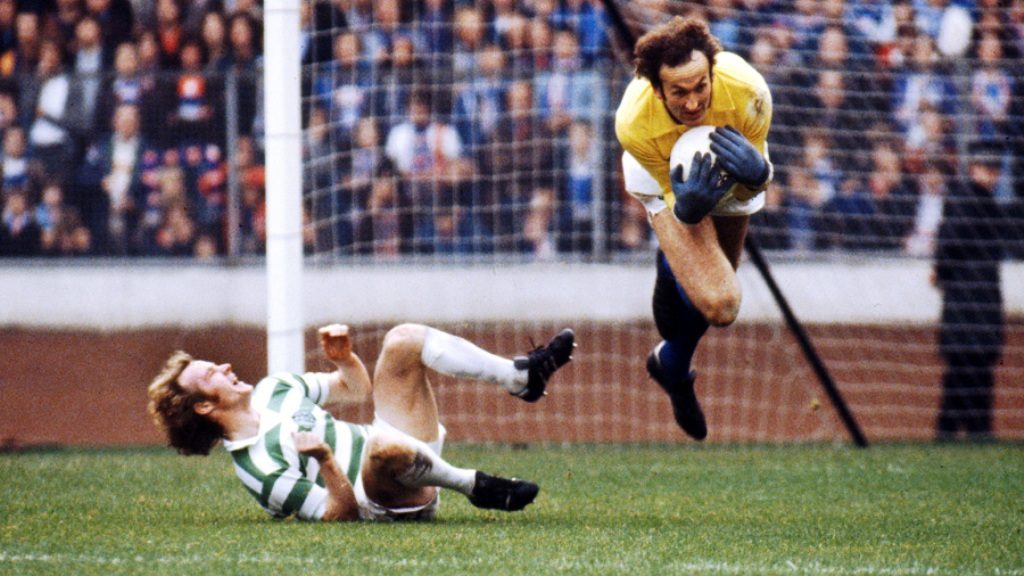 Respectable draws at Hampden, against Rangers whilst construction work continued at Ibrox, and at Easter Road, with Provan and MacLeod scoring their first goals for Celtic, helped keep the Hoops in contention. However, in the final game of 1978, a last-minute Ritchie penalty at Cappielow saw the Greenock team leapfrog Celtic into fifth place, with our thoughts turning to the previous season and the dreaded prospect of a re-run.

The one away performance of note during that period had been at Fir Park, in the second leg of the League Cup tie. A stirring fightback had overturned the Parkhead deficit and with seven minutes to play, the tie was deadlocked at 2-2.

Cue the Ayrshire Mafia of Bobby Lennox, brought back by Billy after a spell in Texas, and the teenage Bear, Roy Aitken, rampaging through the Steelmen defence to seal a hard-earned victory. That took Celts into the quarter-final and a return trip to Montrose, scene of the season-opener. A straightforward aggregate win was illuminated with the long-awaited return of legendary captain, Danny McGrain, after an agonising year-long injury absence.

This would prove to be a critical point in the season, however, of immediate concern was a semi-final tie with Rangers, with the prize at stake a 15th consecutive League Cup Final at Hampden. Not since August 1963, in the days of Haffey, MacKay and Divers, when finishing third in a section containing Rangers, Kilmarnock and Queen of the South, had Celtic been eliminated from the League Cup prior to the final, an incredible run of 155 successive games. 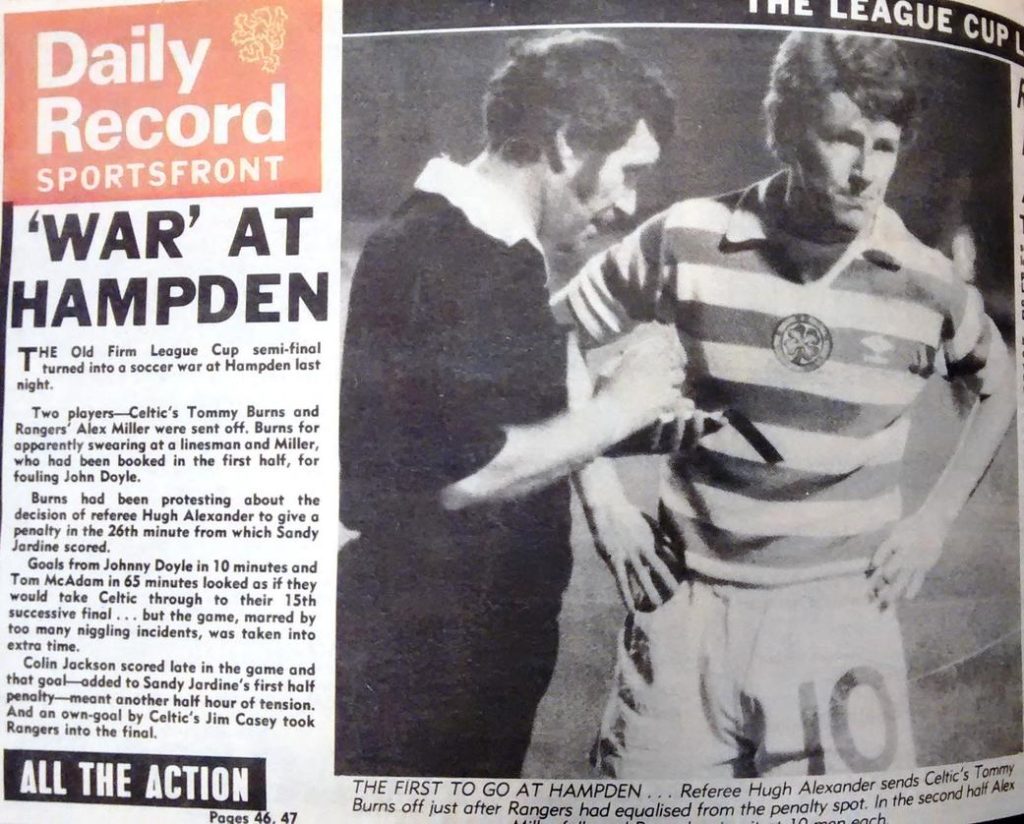 The 50,000 supporters inside Hampden, on a dreadful Wednesday night just before Christmas, witnessed a controversial match, with Celtic twice taking the lead then being pegged back, the second time with just ten minutes remaining. Rangers’ first goal had come from the spot after 26 minutes, with Tommy Burns sent off for protesting the award. Rangers were then reduced to ten men in the second half, as Alex Miller picked up a second booking and the tie moved into extra-time at 2-2.

Tragically, with just seven minutes left on the clock, Johnstone’s shot from a suspiciously offside position was saved by Baines, with the ball rebounding off young Celtic substitute ‘Ben’ Casey into the empty net. There would be no 15th final and, indeed, it would be several seasons before Celtic again graced Hampden for this showpiece…. 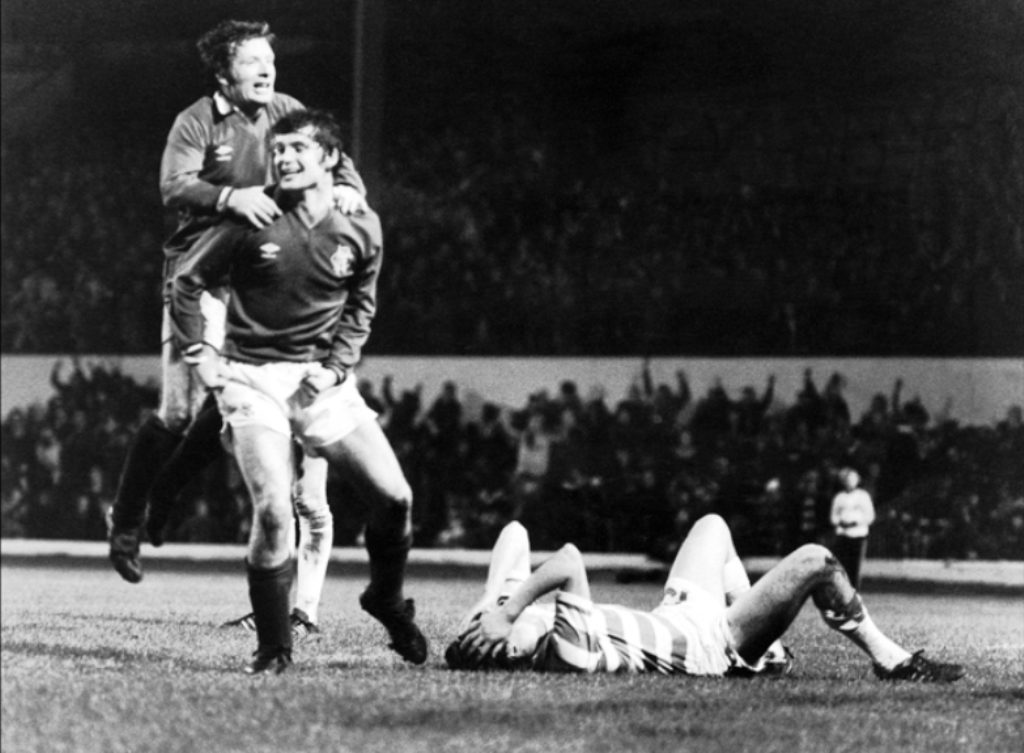 TO BE CONTINUED tomorrow…

Previous ArticleUgly Zombie scenes and Beautiful Sundays as Celtic Pile on the Agony
Next Article Saturday – Silence, 70 minutes of bile, bigotry, racism and disrespect then a swift Zombie exit