You are at:Home»Latest»Paul Wilson – A Courageous Man and a Wonderful Celtic Star
Showing 1 of 2
Next 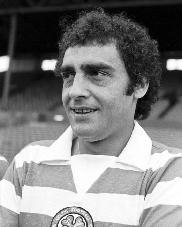 The first European match I ever attended took place 51 years ago this week, on Wednesday, 16 September 1970. That game – a European Cup first round first-leg tie against Finnish champions KPV Kokkola – saw the wonderful Harry Hood score his first hat-trick for Celtic and the 9-0 victory remains to this day the record winning margin achieved by the club in continental competition.

It also marked the debut of Paul Wilson in the Celtic first team, an event made even more special after the 19-year-old second-half substitute had scored twice to complete the rout for a Hoops side still trying to shake off the hangover of THAT defeat in Milan, four months earlier.

In a strange twist of fate, this week also marks the anniversary of Paul’s death, which occurred on this day four years ago, on 18 September 2017.

Paul Wilson was born in Bangalore, Southern India on Thursday, 23 November 1950. His Scottish father was a serving RAF officer who had met his Dutch-Portuguese mother whilst stationed on the sub-continent. The Wilson family would return to Scotland whilst their baby son was still just one-year-old, settling initially in the shadow of Celtic Park in Dennistoun. They would move to suburban Milngavie when Paul was 11, the young Wilson catching the eye whilst at that renowned football academy nearby known as Drumchapel Amateurs. 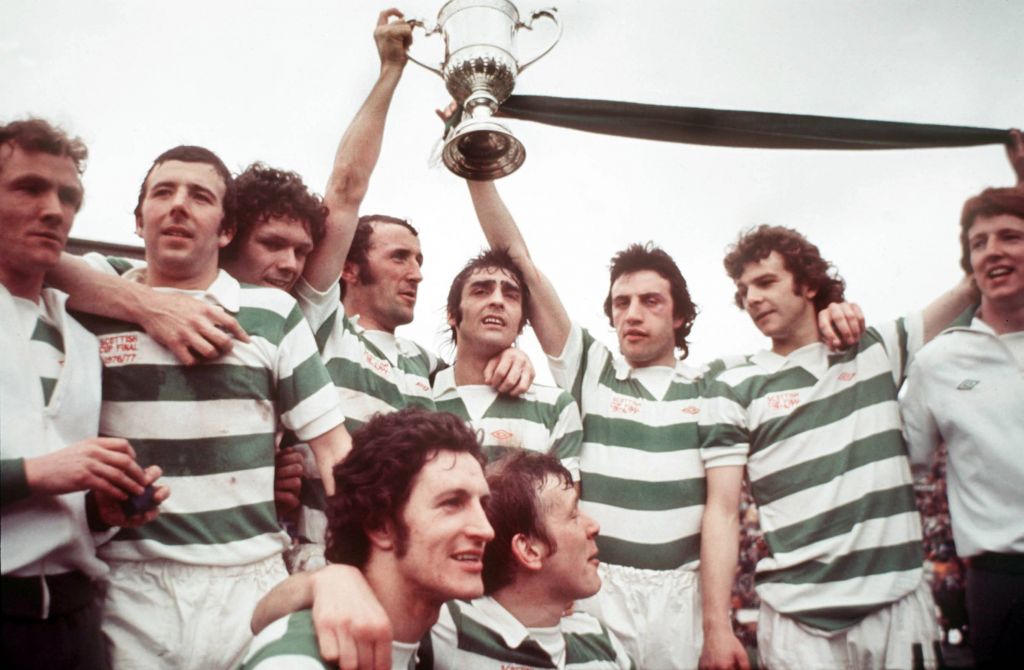 Paul would then train with perhaps the greatest reserve side of all time, the Quality Street Gang, with future legends such as Danny McGrain, Kenny Dalglish, David Hay, Lou Macari and George Connelly for company. He signed professional forms for Jock Stein in the aftermath of the infamous games in Buenos Aires and Montevideo, in December 1967, just after his 17th birthday. As was the custom at that time, Paul was then farmed out to a local junior side as the next stage of his development, in his case with Maryhill.

Paul would get and take his chance against Kokkola in September 1970. Seven days after his debut, he would again be called off the bench, early in the second half, as a replacement for John Hughes in the second leg of the League Cup quarter-final with Dundee at Celtic Park. With Celts 3-1 ahead on the night and two goals clear on aggregate, Paul sealed the tie with another tremendous finish, his third goal in just over 60 minutes of senior football. The start of dreams for a young man who had been taken to Parkhead many times as a youngster. 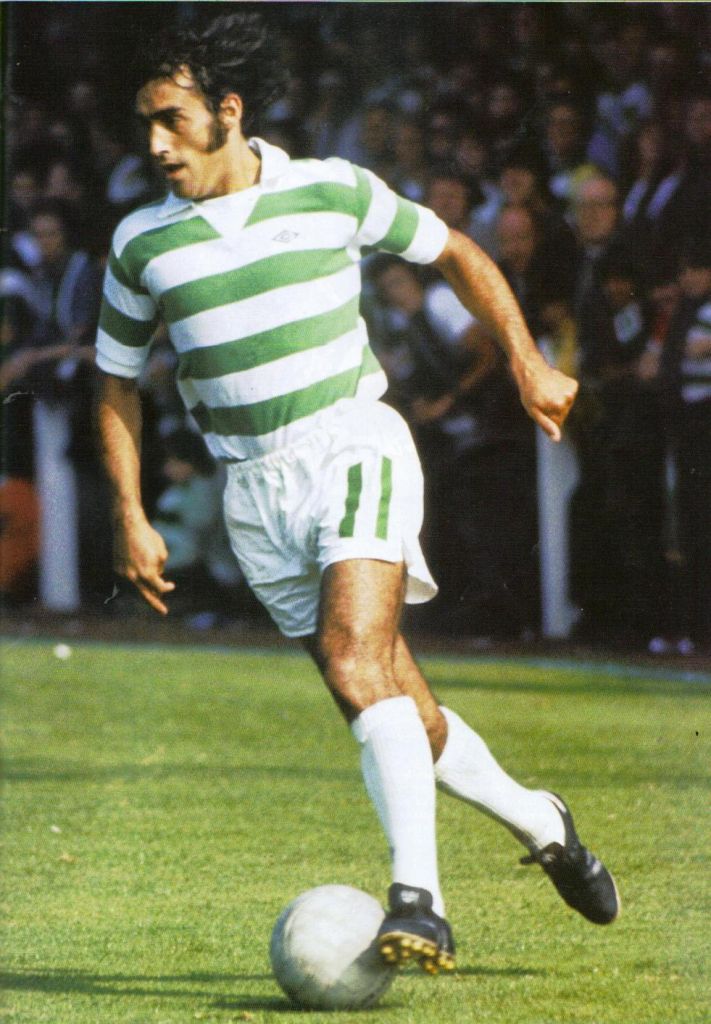 All five players would start against the same club at Celtic Park three days later, Saturday, 26 September 1970, as Paul replaced the injured Hughes for the League match against the Dark Blues.

He would make way for another Lisbon Lion, Bobby Lennox, for the final 20 minutes, with the game comfortably won at 2-0. Jimmy Johnstone would then add a late third for Celts.

Paul’s next outing was a start at Hampden in the replayed League Cup semi-final against Dumbarton on Monday, 12 October 1970. He would be replaced by Lou Macari for extra-time with the sides poised at 2-2, the substitute scoring the clinching goal as the Bhoys squeezed through to the final by 4-3. And Celts would again edge a seven-goal thriller in Wilson’s final appearance of that campaign, a Glasgow Cup tie at Firhill the following March. Paul’s strike with 13 minutes remaining would see the Hoops through to a last four date with Clyde.

Wilson would again be eased gently in the side for the following campaign, as a young Kenny Dalglish marched ahead of the established stars in the striking pecking order. His first outing would not come along until the first Saturday in December, replacing the injured Lou Macari after 30 minutes in a 5-1 romp over Kilmarnock at Celtic Park, a nice birthday gift for my dad.

Paul retained his place the following Saturday, setting up Dixie Deans for a late winner as Celts beat East Fife 2-1 at Parkhead to maintain the charge for a record seventh successive title. His next appearance would be a Scottish Cup debut, one of four changes made by Jock Stein as the Bhoys commenced their march towards a second consecutive League & Cup Double by beating his old side Albion Rovers 5-0 at home on Saturday, 5 February 1972. 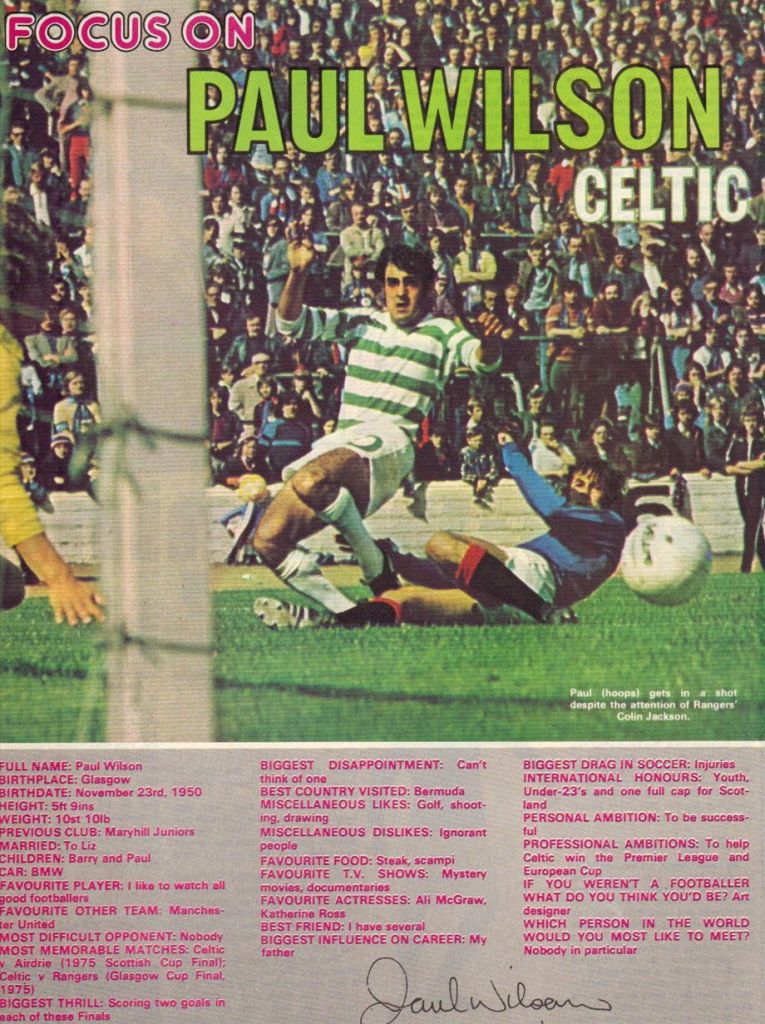 Showing 1 of 2
Next
Previous ArticleMartindale’s comments on Livingston’s Poundland plastic pitch ensures Scotland gets the football it deserves
Next Article “We turn into Beijing, we turn into Moscow,” Spiers quotes Salary and brands Robertson “a slightly pathetic figure”