MICHAEL STEWART has given Scottish football a poignant reminder that Celtic are just two games away from completing a brilliant quadruple treble. It has been doom and gloom after a poor week for Celtic, losing twice and dropping further behind Rangers with a draw at Pittodrie. However, the BBC Sportsound pundit believes that Lennon’s side are looking shaky defensively, despite being better in attack.

“Celtic huffed and puffed against a side set up to frustrate them, but even though Derek McInnes’ side got two penalties, their second was a shocker defensively.

“Shane Duffy didn’t deal with the ball, Kristoffer Ajer wasn’t tight enough to Sam Cosgrove, Scott Bain palms the ball and Ryan Hedges turns it in. I expect Derek to set the team up to do the same in next week’s colossal tie. 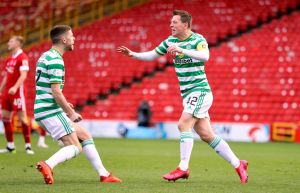 “People can’t forget Celtic are still two games away from a quadruple treble, which would be unbelievable. It’s so strange because it’s last season’s competition sandwiched in the current campaign, but, given current form, you have to say this is the shakiest it’s felt.

Neil Lennon came in as interim manager in February 2019 after Brendan Rodgers left for Leicester and navigated the club to 8IAR as well as delivering a third consecutive treble. The manager lead us to 9IAR but following Damien Duff’s departure, Celtic have looked to be a lot slower and practical as opposed to the fluid, attacking team we saw before lockdown.

The club need to recruit another coach to help ease the burden on Lennon and help keep this campaign on track.