You are at:Home»Latest»Photo: Ajeti spotted arriving in private jet as Celtic transfer nears

ALBIAN AJETI has landed in Glasgow as his transfer to Celtic nears. The 23-year-old has touched down in a private jet as he heads to Parkhead to be shown around before a training ground visit with personal terms and a medical still to be concluded. 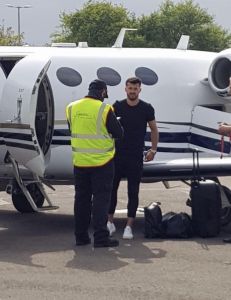 The Swiss Internationalist is expected to sign on a permanent basis for £5m after a failed move to the English side. David Moyes sanctioned his sale and Lennon made it clear that he wanted the striker – personally intervening to make sure he moved to Celtic.

Is this what the cool kids are calling "levels"?https://t.co/Yc2U52JsnA pic.twitter.com/64AU8ny2WP

The Celtic Star reported on the Daily Record story earlier today that the deal for Ajeti had changed from a loan to buy agreement to being a straight purchase instead.

Previous ArticleSheridan says Celtic should sack Bolingoli – “No one is above the rules or the law. Even a Celtic star”
Next Article Report links Celtic defender with Serie A giants Napoli