Carl Starfelt watched Celtic’s game tonight against FC Midtjylland in The Champions League Second Qualifying Round. The 26-year-old has agreed a long-term deal with Ange Postecoglou’s side and by the looks of it, he is in the UK undertaking his quarantine.

In a photo uploaded on his Instagram, the Sweden Internationalist clearly had the Celtic game on his iPad while he tucked into his dinner. The £4.5m arrival from Ruben Kazan appears to be in a hotel and the selection of water suggests that he is in the UK. This means that we are getting closer to his announcement as a Celtic player. 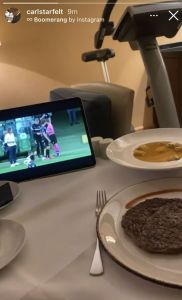 Liel Abada scored the opener but a Barkas mistake allowed Evander to claw one back for the visitors. The game finished at 1-1 meaning that the Celts will go next Wednesday knowing that a win is needed against the Danish side and hopefully, Starfelt will be available for the next round if we can get beyond Midtjylland.

Confirmed. Kristoffer Ajer will join Brentford on a permanent deal for €15m. Carl Starfelt will be his replacement at Celtic from Rubin Kazan, done deal for €5m and official announcement in the next days. 🔴 #Brentford #Celtic

Previous ArticleVideo: Howler from Barkas as Midtjylland equalise
Next Article Video: “The tie is not over yet”, McGregor hoping to finish job next week