You are at:Home»Latest»Photo: Celtic attacker rewarded with FIFA TOTW

MOI ELYOUNOUSSI has been rewarded for his hat-trick versus Motherwell with a place in FIFA 21’s Team of the Week. The Norwegian winger scored three in a 4-1 win at Fir Park on Sunday, bouncing back from unjust criticism for being on his phone. 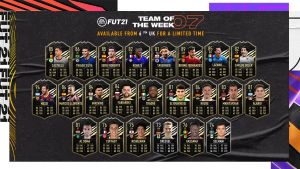 Elyounoussi has been in fine form since Neil Lennon opted to change the formation to 4-3-3/4-2-3-1 allowing Elyounoussi to play on his natural left side. Elyounoussi joins world class players such as Leo Messi, Bruno Fernandes and Thiago Silva on the TOTW, which will be greatly received by Celtic supporters and FIFA players.

Previous ArticleInjury Update – John Kennedy’s ‘Saul Goodman’ message
Next Article 12 Nov, 1969, Celtic 3 Benfica 0 – “Their support was fantastic and it was worth an extra man to the team,” Jock Stein