Scott Brown will lead Celtic out for the final time as captain tomorrow at Parkhead and the club allowing with kit sponsor Adidas have decided to mark this occasion with an incredible pre-match jacket. After 14 years in Glasgow’s East End, Broony will leave the club and will be hoping to sign off with a win against St Johnstone.

It remains unclear whether the club will sell these as they would likely do quite well. Brown has often championed charitable causes during his time at the club and this could be an opportunity to do something similar. 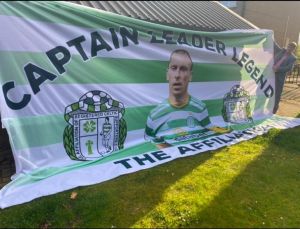 Brown won 22 trophies with Celtic, an incredible achievement for a fantastic player and he will be sorely missed when he makes the switch to Aberdeen for next season.