You are at:Home»Latest»Photo: Celtic trio dominate in SPFL Team of the Week

THE SPFL have named their Team of the Week and it is no surprise that three Celts take their place in the line up after a thrashing of Ross County in Dingwall. The Celtic trio of Vasilis Barkas, Shane Duffy and Odsonne Edouard were included with the latter pair scoring as Neil Lennon’s side wrapped up three points.

It is testament to Vasilis Barkas that Ross County didn’t trouble the scorer with the Greek Internationalist making a number of impressive reflex saves to earn a clean sheet. 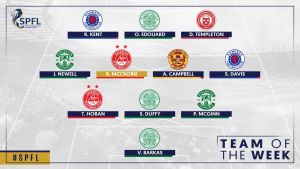 Odsonne Edouard scored an early penalty and was a constant menace to the Staggies front line. He nearly put Patryk Klimala in for a tap-in after weaving through the defence. Shane Duffy meanwhile scored on his debut with a towering header which such might that it even left Christopher Jullien on his backside.