You are at:Home»Latest»Photo: Celtic’s defensive woes are laid clear as they are outnumbered in their own box for Hearts to make it 2-1

Celtic’s biggest problem this season is you genuinely fear that they could concede every time the ball comes towards their box.

Obviously the keepers need to take a big share of the blame because so many saveable shots end up in the back of the next, but the absolute lack of desire to get back and defend the box is a real issue too.

Hearts are back in the cup final after a fairly simple header, but this image shows how dreadful Celtic’s defence really is: 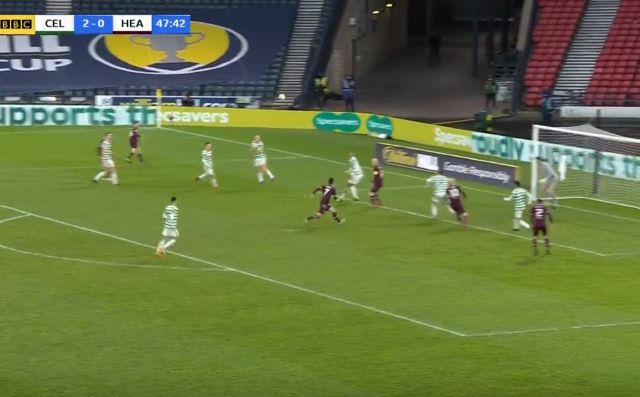 .@JamTarts are right back in this! 💜

You’ve got three players out in a wider position who aren’t trying to pressure the man or block the cross, while Celtic are outnumbered in and around their own six yard box as the ball comes in.

Duffy has to to do better to defend the ball, but the sheer lack of numbers and organisation is an absolute disaster just now.

Previous ArticleVideo: Celtic fans will love this as Scott Brown laughs off a pathetic lunge from Andy Haliday
Next Article Video: Celtic continue to demonstrate the need for Fraser Forster after horrible goalkeeping leads to Hearts’ equaliser